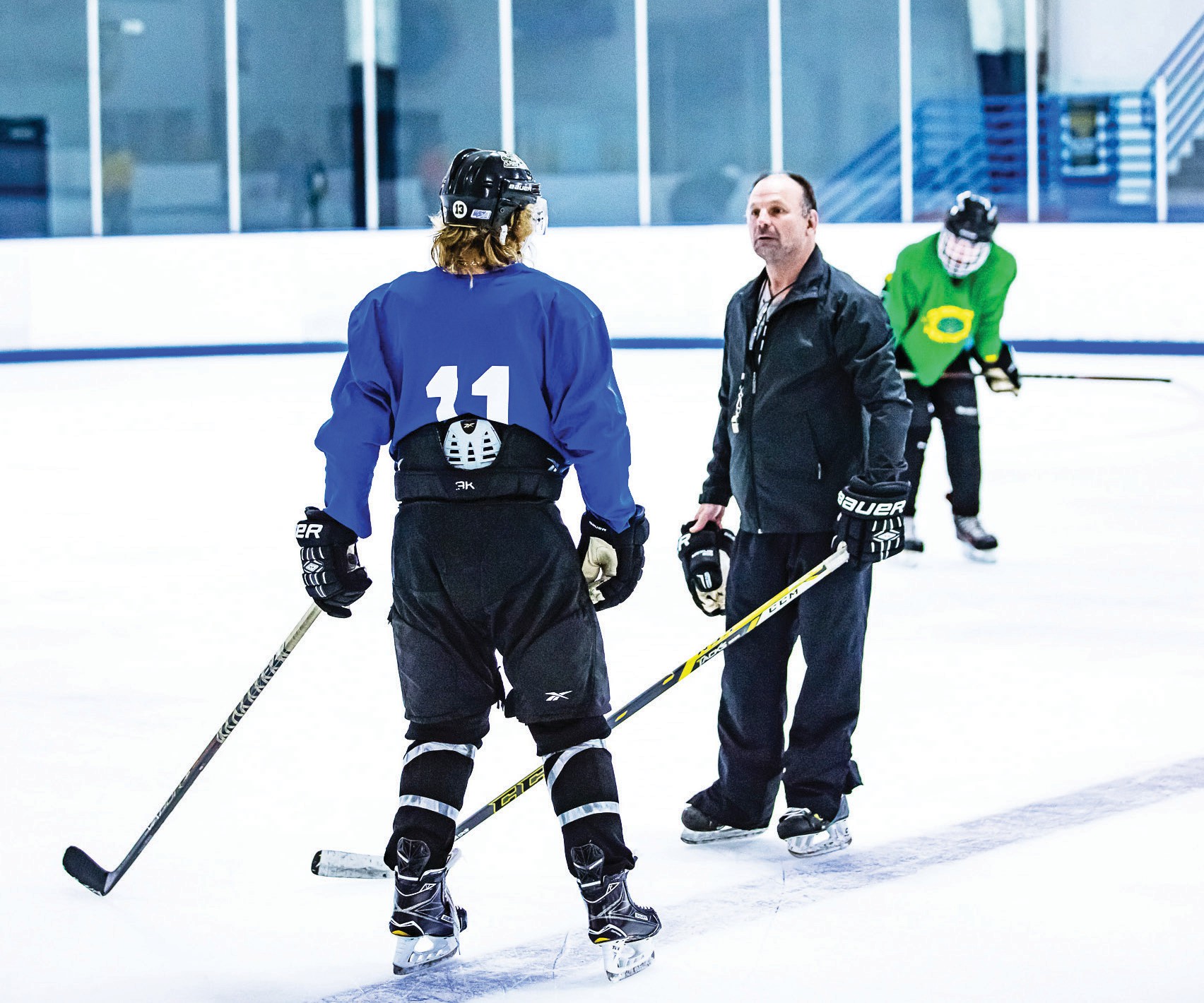 Highly-regarded coach Joakim Falt has a word with one of his players. Photos by Lenny Kerbs

For the San Diego Sabers hockey club, last year was like a trying time in the wilderness.

Many factors conspired against them to make their journey an arduous and difficult one; the necessity of a coaching change, injuries to two of their top players, a suspect defense that allowed too much rubber to be directed at the goalies and the eventual jettisoning of personnel prior to the trade deadline.

Mix all that together with some additional contributing factors and what you have is a painful and disappointing 9-40-3 record and a place in the basement of the rugged Western Division of the Western States Hockey League.

It was hardly a season to remember. But fortunately, it was one that the team decided to quickly flush and forget. Once the final horn sounded signifying the end to the 2015-16 season, the Sabers immediately went into reconstruction mode. A major revamping and makeover was undertaken.

So much so that only two holdovers from last year’s roster are still around. Like a fissured sheet of ice, the Sabers have been given the Zamboni treatment; appearance changed, ruts smoothed over and reflecting a whole new sheen and gloss.

And the results could very well be striking and dramatic. These reconfigured Sabers figure to be a revved-up and youthful group that will go hard and demonstrate plenty of heart. Moreover, with a multi-skilled defense corps leading the way, the Sabers should be able to rectify much of the goals-allowed woes that plagued them the past season.

The main architect of this renovation has been Owner/General Manager Jim Cavataio, an engaged, knowledgeable and upbeat sort who is committed to making his team a competitive one for both the present and the long-term.

Because Cavataio is a firm believer in building a squad from “the net out,” he initiated his renovation by bringing in two promising goaltenders and then surrounding them with assertive and talented two-way defensemen who can get the job done at either end of the ice.

Moreover, Cavataio has made it a high priority to inundate his roster with players who possess high character and have the ability to mesh with teammates not only on the ice but off it as well. Cavataio is convinced that having quality guys inb his locker room is the first piece of the puzzle that will help create a winning culture and foster lasting success.

Before moving further on and taking a detailed look at the coach and players expected to spearhead a Saber revival, a brief bit of background and information about the franchise might prove helpful.

Though the Sabers incorporate the San Diego name, it might surprise many in the local community 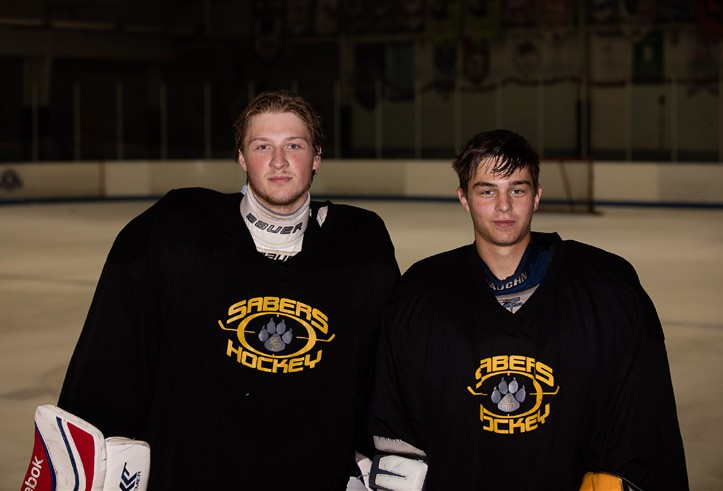 The Sabers will be counting heavily on the goalie tandem of Adam Sandberg (left) and Matt Soldano.

to realize that the team is based out of Escondido and plays its home games at the Iceoplex located on N. Tulip Street.

The Sabers are a Tier 2 Junior team that is a member of the highly competitive Western States Hockey League, a circuit that is considered to be among the three or four best of its kind in the entire United States.

The players range in age anywhere from 16 thru 20 and hope to use their experience in the WSHL as a springboard into eventually landing a spot on a college team or a professional one somewhere either in Europe or in the U.S. Because the players are not paid, they retain their amateur status.

The WSHL provides a tremendous platform from which players can get their name out, become better known and demonstrate their singular skills to those scouts and evaluators ever on the alert for new and burgeoning talent.

Undeniably, one of the most pivotal moves Cavataio made in order to get the Sabers headed in to right direction was the hiring of Joakim Falt as his bench boss. Falt comes over to San Diego after a stint with the Whitefish Wolverines, a WSHL team that he led to the semifinal round of the playoffs last year. Falt has had extensive experience at the junior level and has helped usher countless of his players into the Division I collegiate or professional ranks.

A one-time pro player and coach in his native Sweden, Falt is a great motivator in addition to being a splendid recruiter. Fair-minded but firm and in control, Falt has a presence about him. Watch him conduct a practice and there’s no absolutely no doubt who’s in charge. He’s clearly a hands-on instructor and his players pay close heed to whatever he has to say. Well organized, disciplined and a maven of conditioning, having Falt aboard gives the Sabers a real leg up in their quest to reassert themselves.

Since the goaltending position is of such tantamount importance to any hockey club, that’s an apropos place to begin a positional breakdown of the Sabers. At press time, Matt Soldano and Adam Sandberg were waging a tight battle to see who would emerge as the lead netminder with no clear-cut winner having yet been established. But regardless of how things shake out, each figures to get his share of action during the course of the campaign.

Since the scheduling in the WSHL calls for blocs of three games to be played over the course of a weekend, rarely will any goalie see duty in all of those contests so there should be ample playing time to go around. 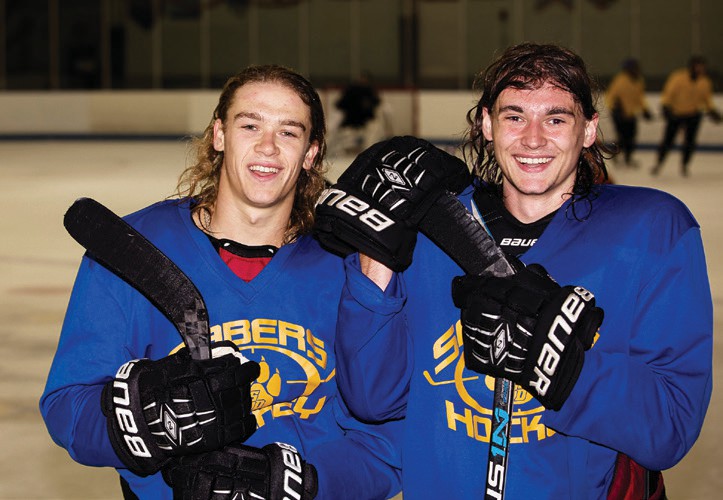 Forwards Steven Jackson (left) and Keegan O’Brien are the lone holdovers from last year’s team and figure to be key offensive contributors.

is a fundamentally sound goalie who knows how to play the angles and always seems to be in the right position. He also moves well laterally and possesses notable quickness. Meanwhile, the Swede Sandberg is a tall, very technically-oriented backstop who is particularly difficult to beat on the first shot.

Perhaps the unit that is generating the most buzz is a collection of defensemen that offers plenty of upside and potential. It is anticipated that these back-liners will be speedy, creative, tough in front and eager to jump up into a rush whenever that situation presents itself.

Look for Mattias Eklund to be a pacesetter for the “D.” A fine skater with lots of smarts, Eklund has an offensive bent and his shot is stout. But he also prides himself on being a force defensively and a player who can get it done in deep or at the blue line. In tiptop shape, Eklund is a minutes-eater who is expected to log loads of ice time.

Paired with Ekhund in the hopes of comprising a formidable duo will be Oskar Johansson. In some respects, Johansson has similar capabilities to those of his backend mate but he’s bigger and more physical. Not the least bit hesitant to mete out a hit, Oskar is very effective in the corners and plays with a decided edge to his game.

Liam Richie has earned the distinction as the Sabers’ shutdown defender. Armed with size and a uncompromising mindset, Richie will often be on the ice against the opposition’s top lines because of his knack for closing the door on them. Positionally strong but also the owner of a very good shot, Richie can contribute in a number of different ways.

Another back-ender of note is Czech Martin Valicek. A big youngster who can move well, Valicek is masterful at the critical breakout pass. A solid defender, Martin also has enviable skills at the other end and he possesses a great feel for when to jump into the play.

Upfront, the forwards are headed by the lone two carryovers from last season, center Keegan O’Brien and Steven Jackson. Mirroring each other in many respects, these two have a similar style and approach. Each can motor on the ice, play with intelligence, do the job on the backcheck and then became a threat when they have the puck.

Phillip Larsson is another Swedish import who is extremely skilled, fluid and has a well-rounded game that should translate into goals and points. Big winger Kevin Dumont can shoot and based on his size and temperament, he fits the power forward role to a tee. Another noteworthy physical player is Greg 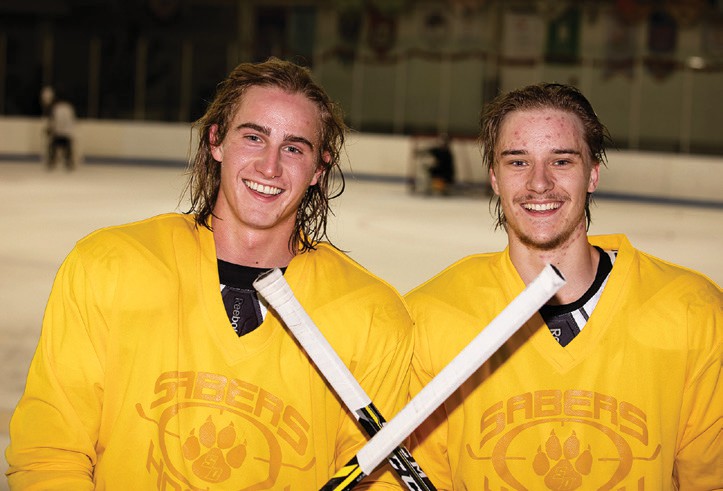 The defense will be anchored by the formidable duo of Oskar Johansson (left) and Mattias Eklund.

Houle who was acquired in a trade. Though he’s one tough customer, Houle’s a great kid who works exceedingly hard.

Local product Cole Parker is a fast-skating, 16-year-old forward who’s fully capable of making a mark. And then there’s Mason Kohn, another youngster who has a very bright hockey future and could impact the Sabers if he develops as hoped.

A fascinating aspect to the Sabers’ lineup is its wide-ranging makeup. Though 16 of the players call the U.S home, four hail from Sweden, four have trekked down from Canada and one is a native of the Czech Republic, all of which gives the Sabers a bit of a United Nations vibe. There’s no question that this is a diverse and most intriguing amalgam of talent.

So clearly the pieces seem to be in place for a definite turnaround if not a full-blown resurrection. Now admittedly, the task won’t be easy since the Sabers reside in the WSHL’s most challenging division that is solid from top to bottom and features such accomplished teams as Long Beach, Valencia and Fresno.

But despite the taxing gauntlet that confronts his team, Cavataio’s ambitions are not muted. “We’re looking to get into the top-4 in the West and then be able to host a first-round playoff series,” he says with conviction rather than wishful thinking. “This is going to be a high-energy team that should have an exciting year. I think we now have the players and coach in place to make that happen.”

And based upon what this writer observed, Cavataio’s optimism seems justified. Watching the Sabers up close, there was plenty to like; speed, athleticism, focus, commitment, being coachable and practicing with an intensity that was palpable. All the signs were there that the reconditioning and overhaul of the Sabers has taken hold and that San Diego is positioned to begin a bright, new era at the Iceoplex.

Last year, the Sabers wandered through a desolate wilderness and got lost. In 2016-17, they’ve hit on a brand new identity and appear to be onto something tangible and real. It’ll be most interesting to see how far the seismic changes that they’ve made will take them.

Writer’s Note: A most sincere thank you to Sabre assistant coach Ross Carmichael whose insights, observations and input were an essential part in helping to produce this article.