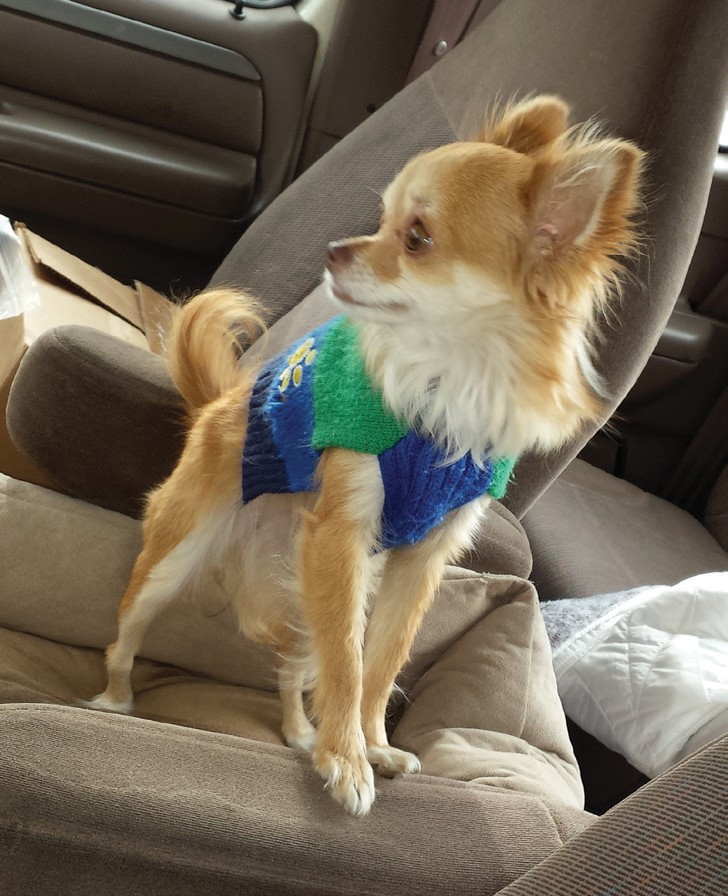 Gypsy waits to be rescued.

Judges and the police tell us that ignorance of the law is no excuse, so once you have read this article you won’t be able to claim that you didn’t know the new California laws that you are now obligated to obey. You have been warned.

Many new laws went into effect in the Golden State as soon as the Golden Ball dropped Saturday night. Some have to do with traffic, and others concern themselves with how much money we pay to the government.

Science tells us that if people are presented with information in the form of a story they are more likely to remember it. So, here goes:

On the first weekday morning of the New Year John Q. California climbed into his car, turned on the ignition and, as he got ready to pull out into traffic, stole a look at the Smartphone he held in his hand, upon which he was given a ticket by a helpful officer. That ticket cost him $20. The officer also ticketed him because the child seat that he had in his back seat for his 18-month old son was not facing backward. Oops!

Mr. California argued in vain that the laws had just gone into effect and that he “didn’t know about them.”

Mr. California pulled into his local 7-11 to buy gas and a coffee and paid onequarter cent less in sales tax for the cup of Joe. He then stopped by his favorite barbershop for a trim and the barber offered him a complimentary beer to sip while he waited in line. His wife, Jane Q. California, was enjoying a similar visit to her salon across town — but she was quaffing a complimentary glass of Chablis.

Mr. California opened his mailbox to find his DMV vehicle renewal form inside and frowned to see that he would be paying $53 for his vehicle registration fee, instead of the $43 he paid the previous year. On the other hand, he was delighted to learn that if he got into a minor fender bender that cost $1,000 or less to repair, that he wouldn’t be required to report it to the DMV. What a relief!

While continuing the drive to his office, Mr. California saw an adorable poodle trapped in a car that had its windows rolled up and no owner in sight. Knowing that he was taking a risk to rescue the pooch Mr. California reached into his glove compartment and pulled out a hammer and smashed the window to let the cool air in. Mr. California was considered a hero under the new law that doesn’t hold rescuers liable for breaking into a car under these circumstances.

After the exertions of freeing the pet, Mr. California was tired and decided to call a cab. Thanks to a new law that requires background checks for Uber and Lyft riders, Mr. California rode to his next destination without worry.

Mr. California continued to his office, where he met with the chief of his crew of farm workers. The foreman demanded that his workers be allowed one day off a week.”

“Why you slackers!” yelled Mr. California. “I supposed you’ll be asking for ten-hour work days next!”

“Nevertheless, the law now requires that you give us one day off a week for rest,” insisted the foreman. “And speaking of work conditions, you are now required to raise my salary to $10.50 per hour.”

“Yikes!” spat Mr. California. “What is the world coming to?”

During the course of interviewing some new workers for his farm, Mr. California demanded to know if a prospective worker had committed any crimes as a juvenile.

“You’re not allowed to ask about juvenile convictions or take them into account,” said the foreman blandly.

Mr. California, who was a best selling writer, spent several hours autographing his new book. One of the purchasers of his book reminded him that if he was going to sell the book for more than $5 that he was legally obligated to vouch for the authenticity of the autograph.

“Yep, it’s me!” assured Mr. California, writing his name with a flourish.

After visiting his doctor and learning that he had a terminal disease, Mr. California breathed a sigh of relief when his physician grasped him by the shoulder and said, “The good news is that the law now allows you to try experimental drugs for your condition.”

However, his relief was short-lived when he learned that, thanks to a change in the law that imposes a mandatory sentence for sexual assault crimes, he wouldn’t be spending Valentine’s Day at home. He probably wouldn’t be trying any experimental drugs while he was there either.

But the good news was that when Mr. California expired during the course of serving his prison sentence AB 691 had him covered by creating a process for managing a deceased person’s digital assets and electronic communications.

And now you know the new laws! Sort of.

If you want to find out more, visit http://www.capradio.org/tags/news/2016/new-california-laws-2017/