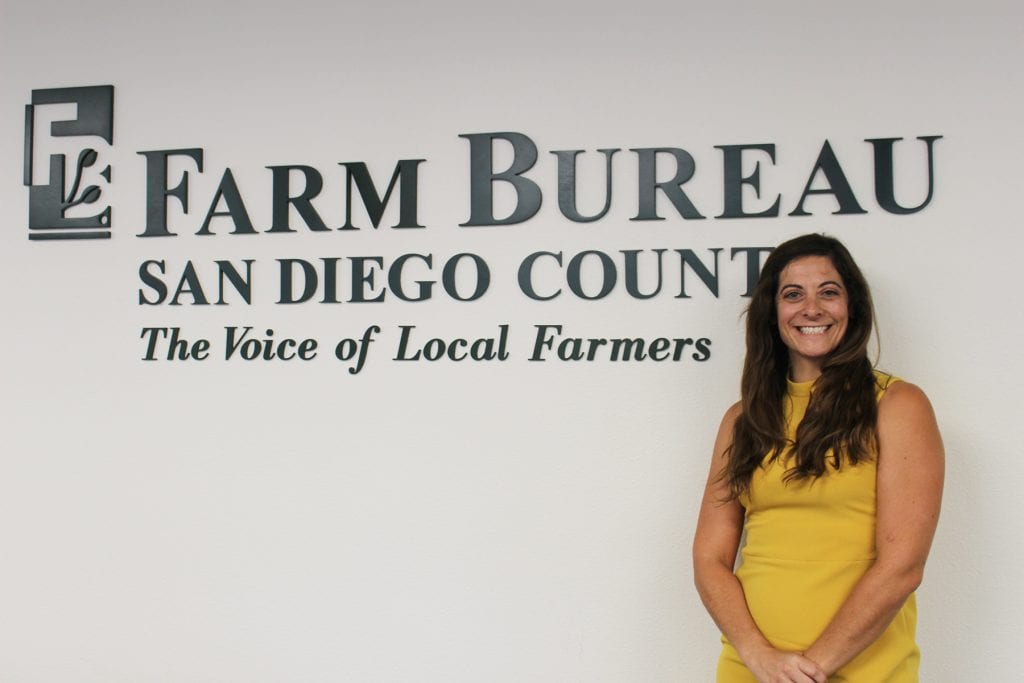 Hannah Gbeh is the new executive director of the San Diego County Farm Bureau. She considers it to be her dream job.

Hannah Gbeh has taken over at San Diego County Farm Bureau as the new executive director. “This is a dream come true for me. I sat on the Farm Bureau board of directors for three years and often thought how much I would love this job. So when it became available I immediately applied.”

Her experience up to this point can almost be said to have been a perfect set of circumstances to prepare her for the job of being San Diego County agriculture’s chief cheerleader, advocate and advisor.

She describes herself as an environmental scientist, organic farmer and nonprofit founder, teacher and researcher. With her husband she owns and operates an 8 acre certified organic family farm in Jamul: Bee Valley Farm.

She is also a commissioner on the County’s Fish and Wildfire Advisory Commission and serves on the Jamul-Dulzura Community Planning Group.

Born in New Hampshire, raised in Georgia, with a degree from the University of Michigan, and first job in Washington D.C., she went to work as a consultant with the Environmental Protection Agency for six months. “I quickly realized that our federal government seemed out of touch with the American people,” she says.

However, she kept her interest in the environment and environmental policy. She taught environmental education to children at summer camps and after her stint in Washington became an environmental instructor at Lake Tahoe.

“I have a personal drive to give back to my community,” she says. So for a time she worked as an AmeriCorps volunteer on Pine Ridge in South Dakota with the Oglala Sioux. “I worked with elder meals for the homebound in the poorest county in the nation,” she recalls.

Her 13 years of working with regulations at the local, state and federal level, gives her a valuable perspective.  “It’s fun for me to apply this skill set to agriculture,” she says.

The Farm Bureau board of directors recently created a vision that Gbeh is committed to carrying out.

Since she and her husband own a small farm in Jamul she knows the many regulations that must be satisfied to be certified as an organic grower, for example.  Hannah and her husband Mannah (the humor of this juxtaposition of names is not lost on her) met at a farmers market. He was originally from the African nation of Liberia and came from a family of rubber tree growers. He came to America and joined the navy. After leaving the Navy he had learned horticulture. When they married they fell headfirst into agriculture and bought 20 acres.

Together they started a non-profit called Charity World, which provides food and shelter to the disadvantaged. They did this together for eight years before she decided to reenter the workplace.

An increasing challenge for farming in this county is the aging farm population that is ready to retire—and whose children aren’t interested in farming. But there are those, such as veterans, who do want to get into farming, but the barriers to entering the field are steep.

“Farmers are not looking to get out of regulations. We want to have a regulatory environment where we are able to comply with regulations,” says Gbeh. “Currently they are convoluted and complicated. Small changes at a higher level could bring significant relief to our growers. It’s prohibitive to run a farm. It’s unusually difficult. We need streamlined regulations and we need to shift things so younger people see farming as a viable option.”

That  means lobbying state legislators, many of who represent urban districts that are openly hostile to agricultural interests. San Diego is an exception. That brings about another goal from the vision: gaining political influence in Sacramento. “Right now, San Diego County is unique,” says Gbeh. “San Diego is very close to being the eighth largest city in the U.S. It is unusual to have agriculture so close to an urban center.”

Right now, she says, animal rights activists are leaning on lawmakers and regularly trespassing on farms, doing things like trying to “liberate” farm animals. Often growers let them get away with stealing livestock (ducks are a popular target) because it’s too much of a legal hassle to fight them, or to drive them off their property. “Activists are trying to ruin farmers on social media,” she says. “Where else do we allow someone to steal product and farmers can do nothing?”

Those who feed the state and the nation want a seat at the table. “We want to be consulted on policy. Policies can be proposed that have a small effect on large companies, but the effect on farmers may be immense.”

An example is the state policy that overtime must be paid after so many hours per week. This doesn’t harm corporations but can be devastating for farmers who depend on seasonal workers who must work for many hours bringing in the harvest. Such a state policy forces farmers to use workers until they reach their limit, and then add more workers. Which has the effect of cutting the wages of the seasonal workers.

Another example, a positive one this time, occurred when a regional lawmaker wrote a “circus bill” intended to make it difficult for circuses to employ large animal acts. But its wording came perilously close to affecting farmers. The Farm Bureau called the legislator—who had been unaware of the threat. “We told him ‘This is a concern. It is far-reaching.’ ” He immediately changed the wording. “So the Farm Bureau went from being an opponent to being neutral on the bill—because this senator listened,” she says.

Gbeh declares, “We have a strong agricultural community. We want to make sure we ae viable and growing for the long run.”

Another goal for the Farm Bureau is to achieve financial stability by attracting more members. It hopes to do this by providing more member services so growers see the advantage of joining. “So that members feel they are getting a return on their investment,” she says.

Finally, the goal is to make sure more grant funding is flowing to area farmers. “A Farm Bureau that is financially stable can provide a high level of support so that we have a strong industry.”

One factor that favors this outcome is the fact that San Diego’s agriculture is a model for the nation of what farm should look like. It is friendly to the environments. It’s not a big contributor to levels of carbon.

Ag is the 12th largest industry in the state. Nevertheless, many growers are thinking seriously about whether they should stay in business because of the obstacles they face. “Should we keep on doing this?” she says.

A state as committed to reducing Greenhouse gases as the Golden State should put more stock in the value of agriculture, says Gbeh. “It is time to teach people that this industry gives you a different perspective on life.”

She adds, “We laugh and we say to ourselves, ‘Why do we do it?’ It’s hard. It’ll kill you. Except we still love it every day. It’s in the blood. In my opinion ag rises to the level of importance that few industries do. I want us to be given that level of respect.”