New Escondido librarian gets out and about at Chamber breakfast 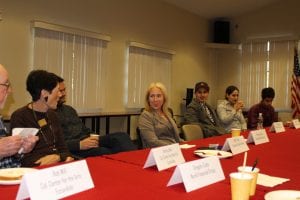 Newly installed Escondido branch librarian Patricia Crosby feels that one of her most important jobs is to get out and into the community to find out what people expect and want from their library, and what she can do to make it serve its patrons better.

The librarian was the guest at Tuesday’s breakfast at the Escondido Chamber of Commerce monthly “Coffee Exchange,” at the Chamber’s headquarters.  Each month about a dozen Chamber members are invited to the coffee, where a breakfast of bagels, cake and fruit is served.

She was brought in to run the Escondido Public Library by Library Systems and Services, the Maryland-based corporation the City of Escondido last year contracted with to operate the library.

She described a series of “strategic planning” meetings library staff have had with stakeholders, civic, educational, governmental and business leaders. The next meeting will be Saturday, March 31, 1-2:30 p.m. in the Grove Room of the E. Valley Community Center (the old Eastern branch of the library.)

Once the Strategic Plan is completed it will be forwarded to the Library Board of Trustees in May for possible action.

Several community leaders took advantage of the opportunity to meet the new librarian. They included Jack Anderson, chairman of the Escondido Library Foundation, who observed, “I see a lot of opportunities for us to do good together.”

Anderson noted that the Library Foundation had opposed the outsourcing of the library, but said that decision had been made and it was time to put public disagreements in the past.

Each guest was asked to talk a little bit about themselves and the organization they represented.

Architect Ken Erickson, one of the creative masterminds of the Grape Day Park plan that would include an expanded library, talked about how an “open city space” is necessary in successful urban spaces. “A library is the most significant used resource of a community. The library is a huge resource,” he said. “It’s a vibrant center and the heart of Escondido.”

Erickson added, “Escondido is not a small town anymore and it’s going to change more. What’s going to make people move here?” He suggested that a vibrant city center and an equally brilliant library will do that.

One of the most important questions to be answered, she said, is why some people don’t use the library or haven’t used it in a long time. “Our question is why not?” she said.

Crosby described the many uses and functions modern libraries are evolving into—and a repository of books is just one of them. Although a future large library may be in the wings, the existing library will need to continue to grow and redefine itself to serve its patrons.

It is a place where people can download materials, a public space where they can meet with friends to have a quiet conversation. “We need for the library to be that space,” she said. “How can we make it more comfortable while we are waiting for something bigger to be built?”

Rorie Johnston, executive director of the Chamber of Commerce said, “Why not forget the Band-Aid and build a new library? I would love to see a library built sooner rather than later.” She added,“But isn’t one of the arguments against building a new one that libraries are becoming extinct?”

Crosby took issue with that concept and pointed out how much use the Escondido Public Library gets daily. “Where else in the community can people go and have access to Wi-Fi and download books? It is an anchor and a relevant place for the community. Even people who don’t use it realize it is important to have that space. To have questions answered, to be a place where people can come.”

A library gives access to a database that taxes pay for, she said. “That you can access twenty-four hours a day.”

At the same time, it is a place where children can come to take part in Storytime. The library has formed partnerships with schools within the city.

It is a civic space “where you can enjoy hanging out with your friends,” said Crosby. “We are now starting to introduce virtual reality that patrons can access and 3D printers. Staff are right now getting training in those.” Often people who stop by the library tell the staff, ‘I didn’t know you can do that at the library’. It’s a service point as well as that space or place.

One of the attendees spoke about the huge San Diego City library and noted that it appears to have been taken over by homeless people. She worried that Escondido’s library could fall victim to that fate.

“Do we want it to be so large that we lose what its mission is?” she said.

Crosby said it’s a balancing act to preserve the library as a public place that is welcoming to everyone, while staying comfortable and safe for everyone.

Today’s librarians don’t fit the old stereotype of sitting behind a desk reading, she says. “Nobody is just sitting behind that desk. There is that level of awareness by the staff.” When people say, “Oh you get paid to read,” she asks them, “Have you been in a library recently?”

She described her staff as “amazing people,” who combine technician with social worker, with researcher and a dozen other jobs. “If you work in a library you are everything all the time,” she said.

Regarding the way the homeless are treated when they come in the library, she added, “Sometimes that might be the only time that anyone looked in that person’s eyes and said, ‘Hello.’”

Bob Will, a member of the arts center board, who was seated next to Erickson, observed, “The beauty of Ken’s proposal is that it would drive more things downtown and give us a larger city center that would be attractive to a lot of people. It gives us a real heart for this town. It would take up a lot of property to do it, but why not?”

Anderson said various price estimations have been given with $50 million being the most common one for the library building, with more money for land acquisition. Whatever it costs, it will need the support of the great majority of residents to be approved.

“The elephant in the room is that the city changed the operation of the library,” said Anderson. “We opposed it—but that decision has been made and the institution is more important than the people who operate it. Let’s not fight about who is operating it.”

Crosby noted that already the new operators have made changes for the better. They introduced a new, high-tech system for checking out books and opened on Sunday and added more hours.

The work to continue to improve the existing library will continue, she said, “because no one has given a figure of less than five years for when a new library could be open.”

She added that the goal of the strategic meetings is to find out the needs of the community and how best to serve them. This includes such things as whether the library should continue to charge for audiovisual or recorded materials at all, or if it should charge fines at all.

“We want to remove as many barriers to using the library as we can. That might include getting rid of charges and fines,” she said. “We need to make sure there are no obstacles to coming in. We have to remove physical as well as financial barriers. Those are all questions that are part of the larger conversation,” she said.

Part of that conversation is getting out into the community and talking to people in all walks of life, said Crosby. “We need to get out. We are doing that, but we need to do it more. We have the opportunity to do a little bit of a makeover. It gives a fresh perspective.”

The group asked a couple of young interns who sometimes visit the library what they go there for. They said for the Wi-Fi, the space to study and a place to hang out with friends.

Crosby smiled, “Everybody needs a space to plug in.”  The library even has laptops that can be checked out by anyone and used within the library itself.

“A library is a place with a space,” she said. “That is the trend of the modern library. It’s a place where you never know who is going to walk into the door and what’s going to happen today. That’s what makes it exciting!”