New director of Escondido History Center has a mission: modernize 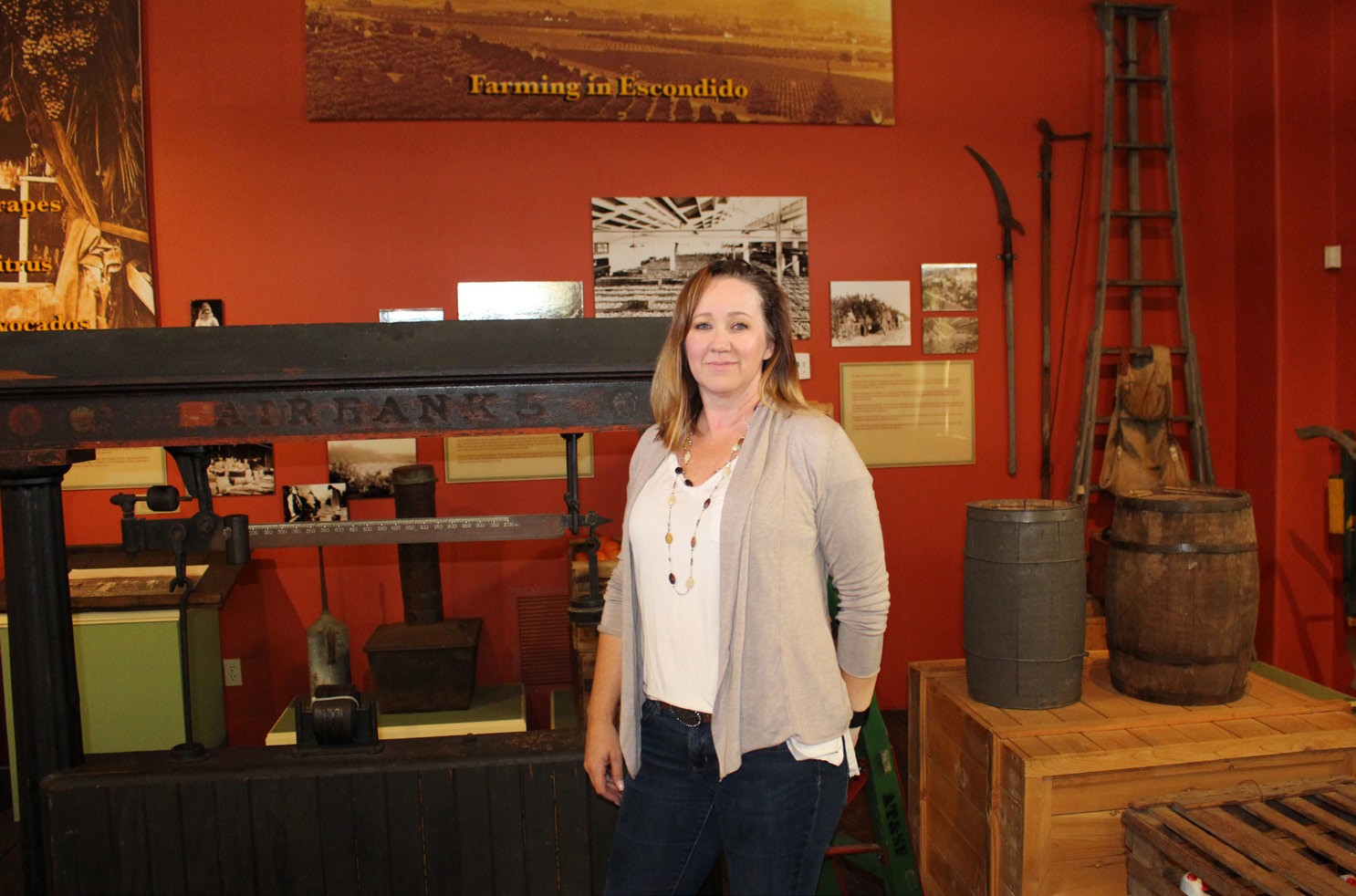 “As time evolves and our understanding of history evolves it is incumbent on us to do history better,” says Stacey Ellison, executive director of the Escondido History Center.

Ellison has been on the job since last fall. Born in New York, she moved at an early age to England, due to the fact that her father was an engineer who worked on structures all over the world, including the World Trade Center at New York City. Born of English citizens, she has dual citizenship in the U.K. and the U.S.

She developed a passion for history at an early age when, she was playing in the forest and found a fragment of a 10,000-year-old axe head that 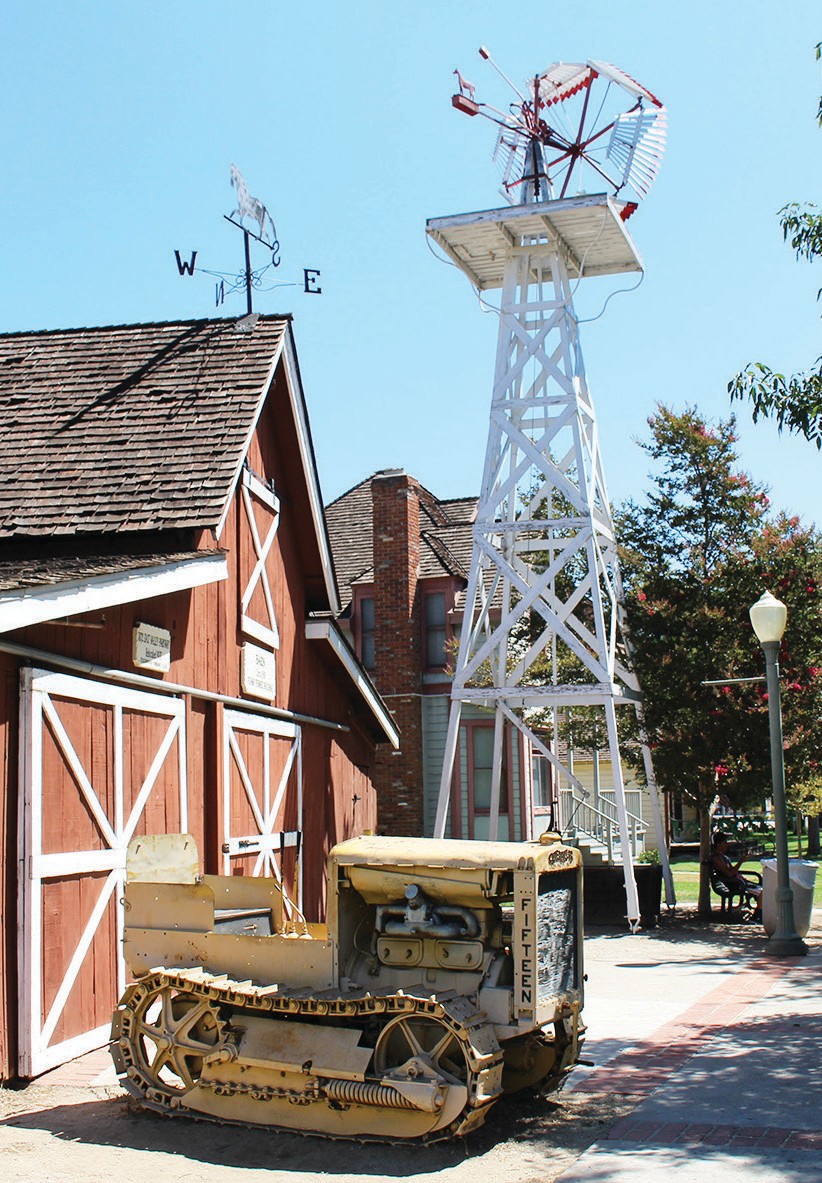 she and her parents took the Victoria museum in Manchester. Asked if she wanted to donate it to the collection, where it probably would have languished in storage with hundreds of other Stone Age artifacts, she shook her head and kept it. That discovery made a big impression on the little girl and gave her a personal connection with history.

Her parents to moved to Southern California in the 1980s. “When you move to a different culture you have to have an understanding of where you are,” she says. “Learning about where you are and becoming part of that is part of your acceptance of your new home.”

To accomplish that goal her parents took her to 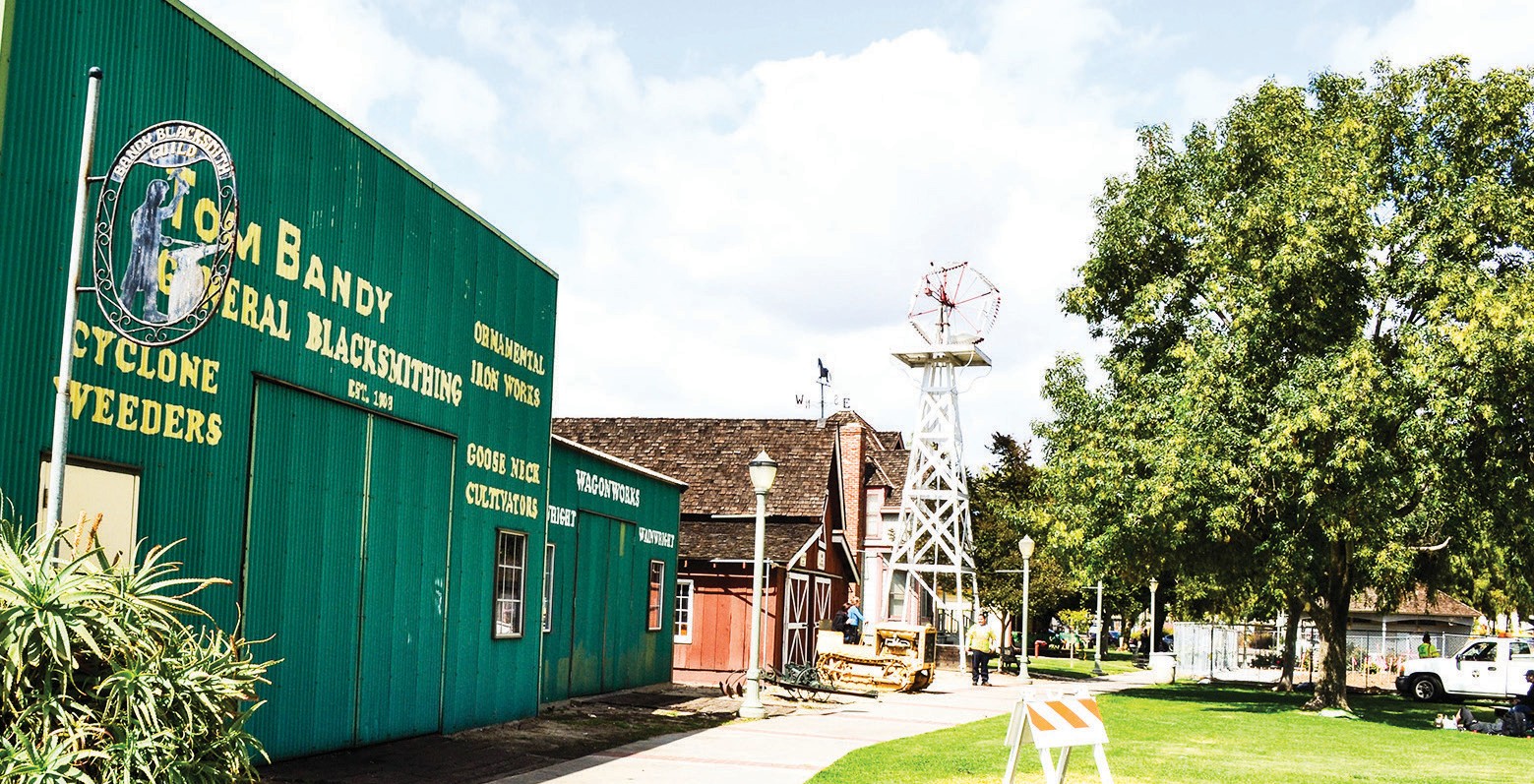 many museums and historical places in San Diego County, such as the original Spanish missions. “It was a few years before I learned what the missions meant to the local residents,” she recalls, especially to the Native Americans, who have something of a love hate relationship with the history of that period.

Several years ago Ellison spent two years helping the nearby Rincon Band of Mission Indians set up their tribal museum on the reservation.

Today she lives in Murrieta with her husband, who is a San Diego County Sheriff’s deputy and her two children, aged 14 and 18.

Although the History Center is located on Grape Day Park, on land owned by the city, it is not 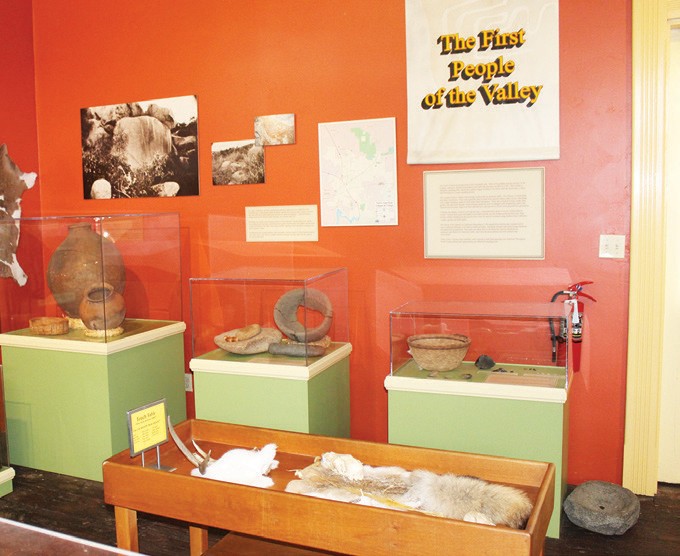 Photos of the Escondido History Center courtesy of Sean Ellison of Pristine Productions and Michio Media.

“We run on a shoe string,” says Ellison, who notes that the annual budget is about $150,000 with no infusion of capital from the city, aside from the occasional grant, such as was used recently to rehabilitate the Santa Fe Depot.

Today the building that was once the city’s first library serves as the History Center office and houses its extensive collection of research materials. Next to it is

The Santa Fe Station was once the hub of transportation activity in Escondido.

the Victorian Country Home that was originally build on N. Escondido Boulevard (formerly known as Nutmeg). It is furnished to show what life was like in Escondido a century ago.

Next to that is the 1901 Penner Barn, which was once located at the eastern end of the Hidden Valley, and features historical agricultural equipment and vintage vehicles. The building also contains a working blacksmith shop, where you will find actual blacksmiths demonstrating their craft on the weekends.

Next is the Santa Fe Depot, one of the oldest buildings in the city, and which was originally located on West Grand between Quince and Spruce. Next to that is fully restored Railroad Car # 92, which was 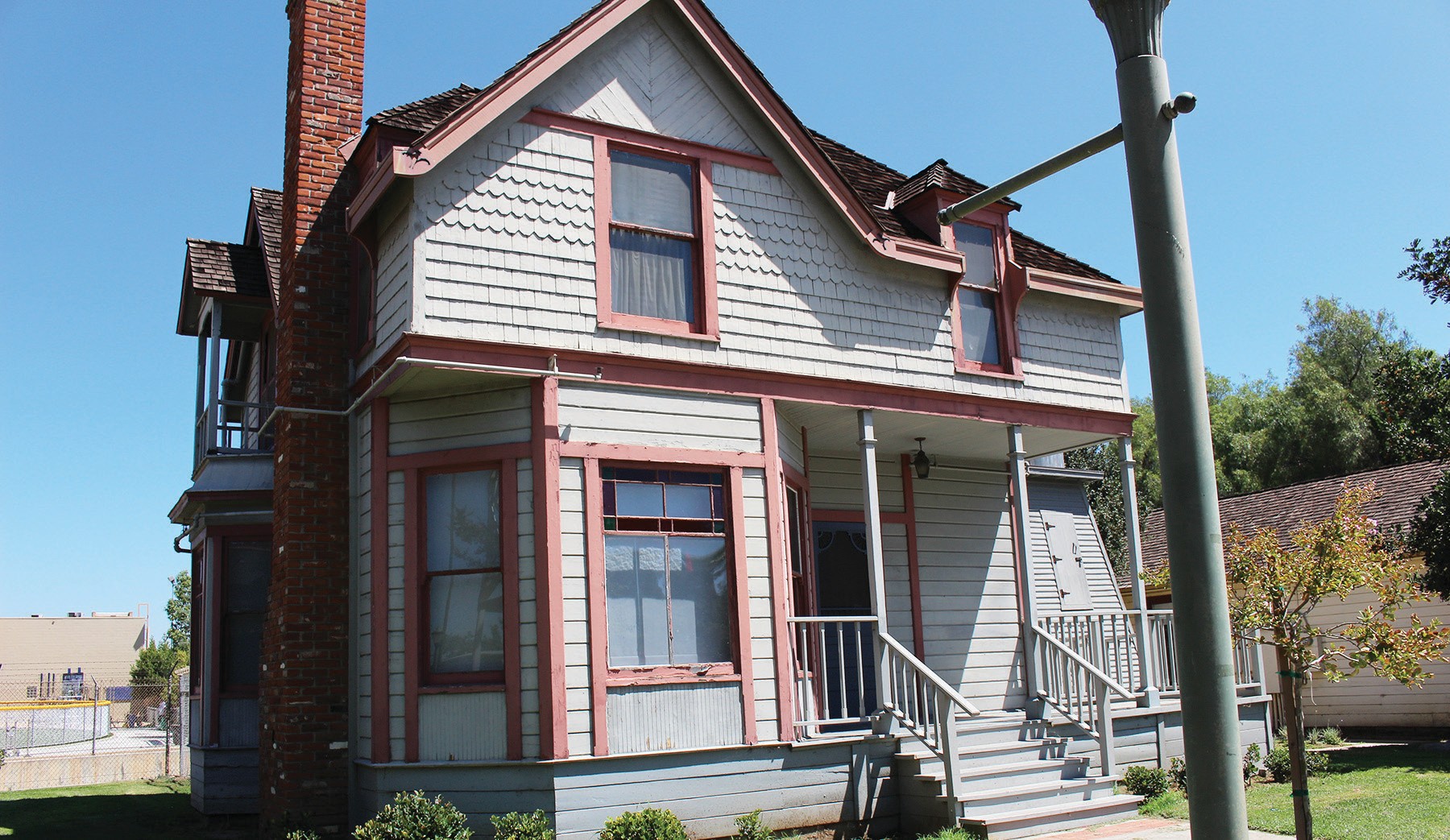 You might be tempted to think this is the home of Addam’s Family, but it’s actually the Victorian House at the Escondido History Center.

built by the Pullman Company in the 1920s.

When Ellison was brought on board late last October the board told her that they wanted to modernize both the Center and its approach to presenting the history of the region. To make it more inclusive and welcoming to the diverse population of Escondido, where, recently the Hispanic population topped more than 51% of residents.

“They were clear when they hired me that they wanted some changes. We are at the point where the world is changing. It’s time to make history more inclusive. How can we make it better? Make it so that our community has a better understanding of who we are and become better citizens 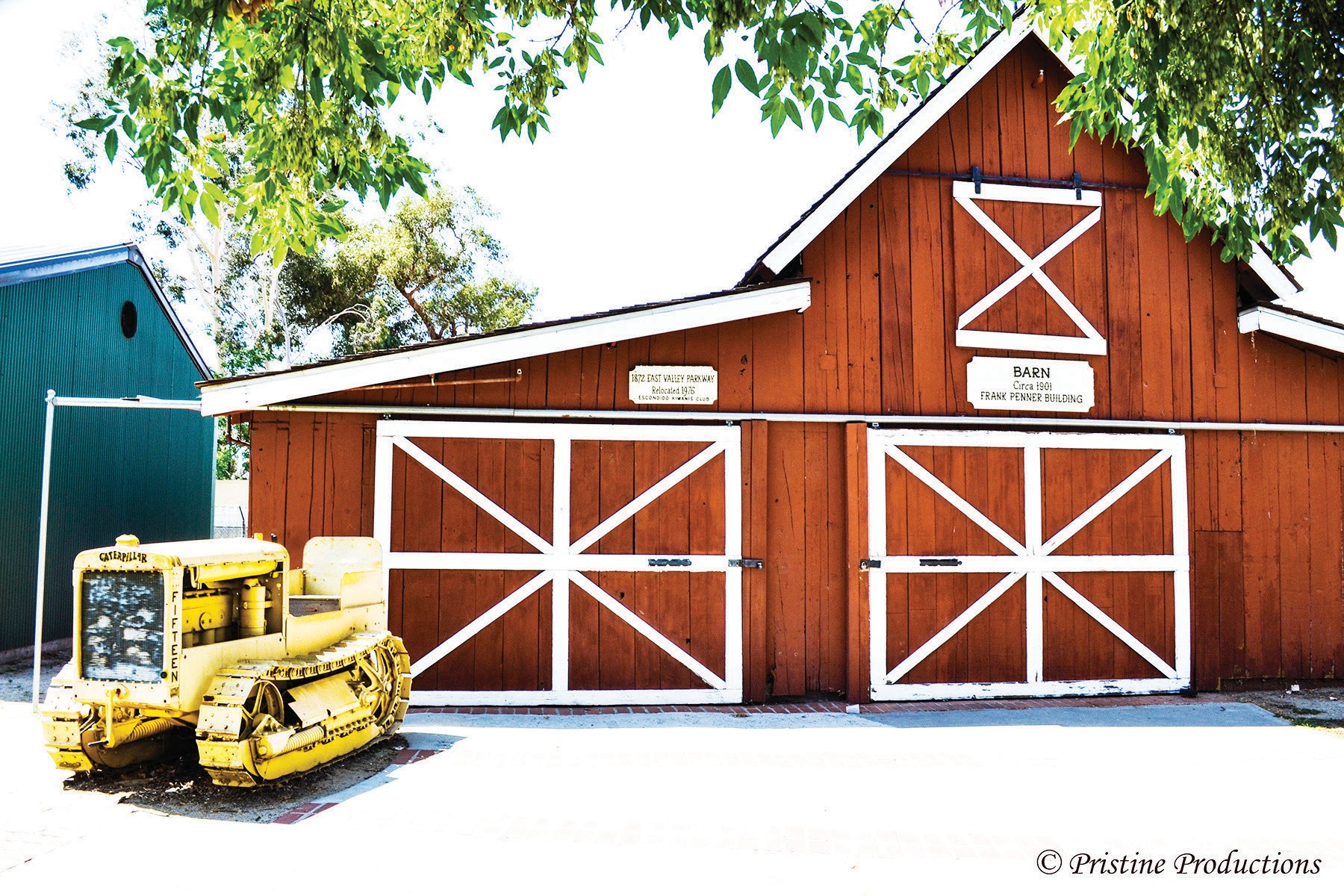 The Barn, where you find a number of historical farming implements from the past. On Saturdays you will also see a blacksmith at work.

because of that,” she says.

That will include talking about some things that perhaps the residents of the city have not been anxious to talk about in the past, such as the ways that Native Americans, Hispanics and even immigrants such as the Chinese were treated in the 19th Century and later.

“Are we proud of everything that happened here? Maybe not. But if we don’t talk about it we will never be able to come to terms with it,” she says.

Ellison has a master’s degree in public history from Cal State Fullerton. Historians approach their discipline from different perspectives, and often the perspective that they approach history from can be highly subjective and controversial. 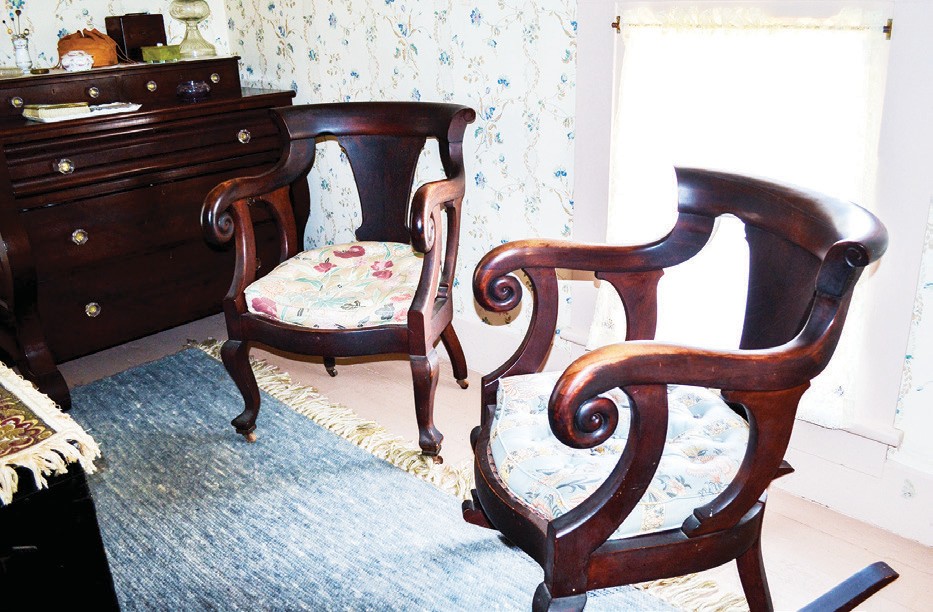 Interior shots of the Victorian House.

to the employment of historians and historical method outside of academia, and so differs markedly from what academic historians do. You will find public historians in government, private corporations, the media, historical societies and museums. They have a different perspective and purpose from college dons doing research in dusty libraries.

The History Center is concurrently pursuing the following goals:

2) Getting its collection digitized so that the public can access it. In this mission it has made hundreds of images available. But there are thousands more to be digitized.

“The idea is to get it all online,” says Ellison. To make that happen they are constantly in need of docents and volunteers. High school 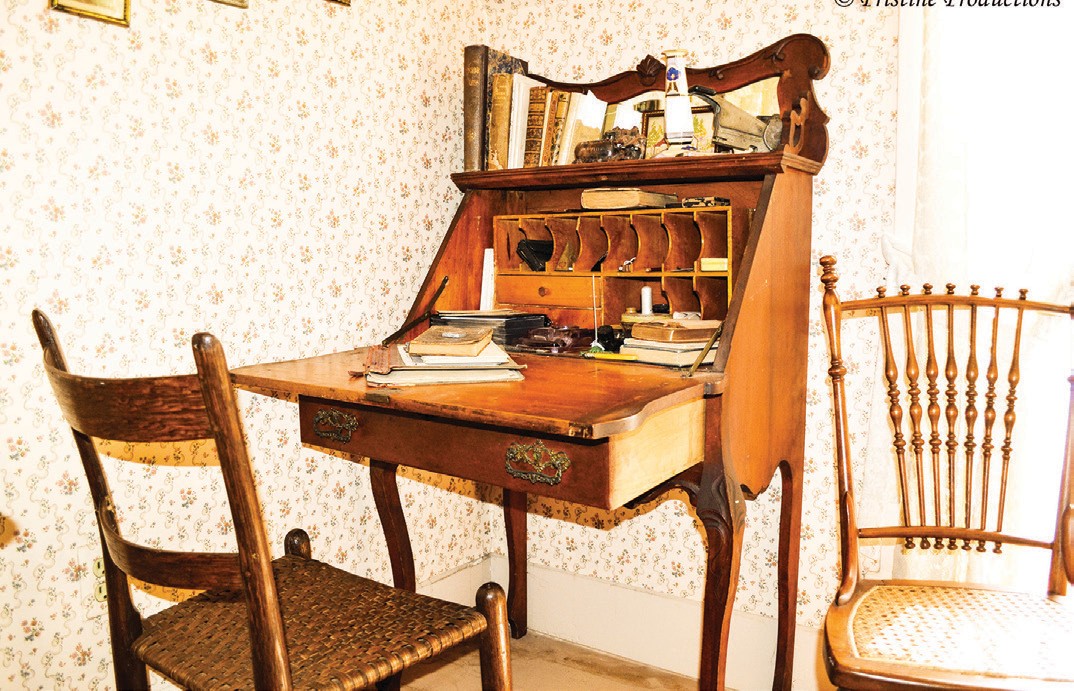 They are also working on creating a mobile app that will make available a self-guided tour of all of the city’s museums. This should be available to be downloaded in from 30-60 days.

She is working with a group called MAGEC, which is made up of members of many area museums and art galleries. “Our purpose is to raise awareness of the wonderful culture Escondido has to offer. We have a lot of tourists who want a real dose of Americana. People from Germany, the Middle East, Britain and Asia.”

One of the first big projects 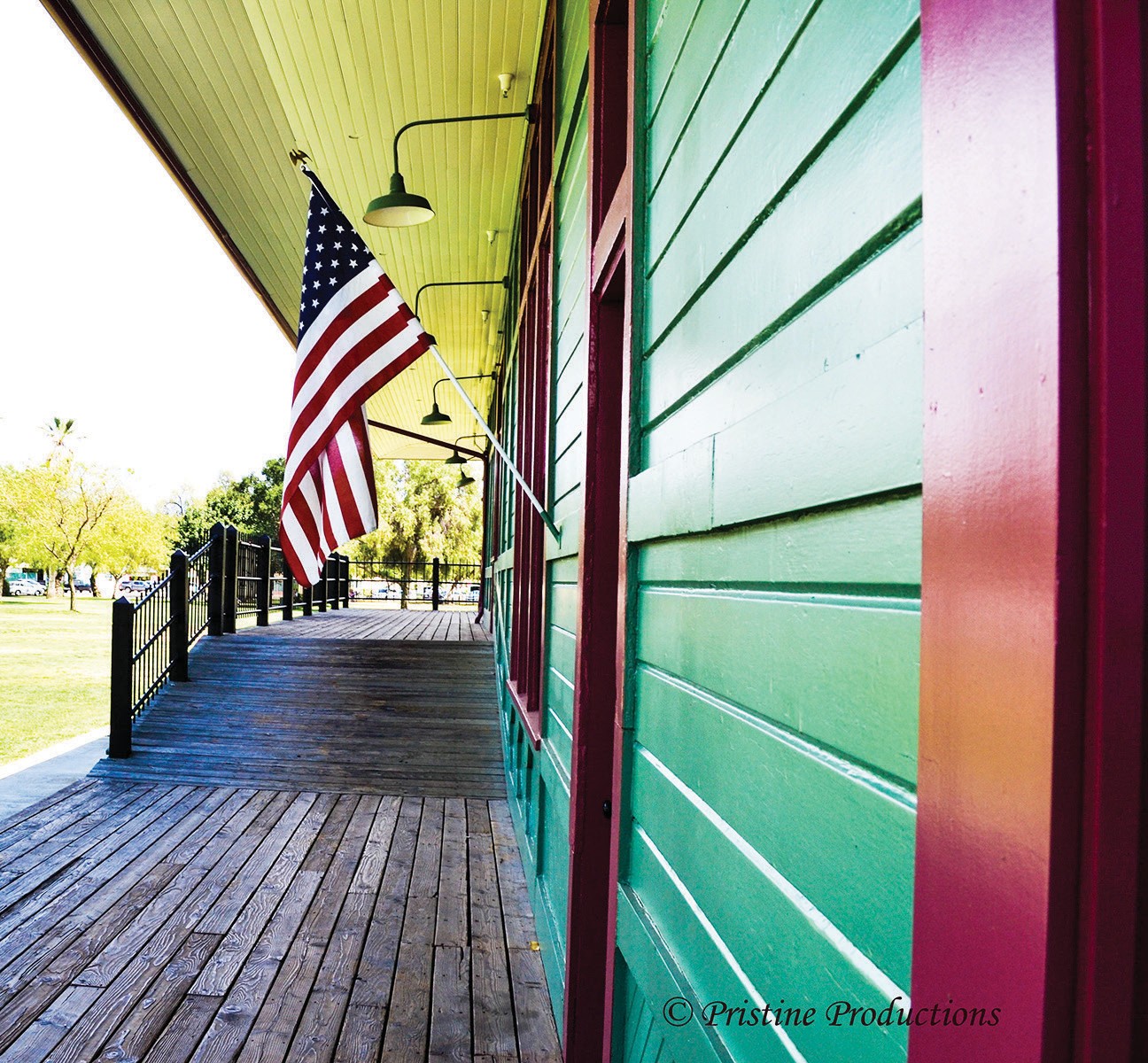 Just outside of the Santa Fe Station.

she was put to work on was to raise the money to put up a Victorian style fence and highly visible signage so that people realize that they are walking through a history center, instead of just a stretch of sidewalk in Grape Day Park. At least four signs will be installed, including a large sign out front of the center. These signs are in the design phase.

“People don’t know that it’s a museum,” says Ellison. “We want to rebrand ourselves, and to put up interpretative signs so that each stop along the way is identified.” The land that will be enclosed by the fence will be landscaped with xeriscape, i.e. low water usage plants 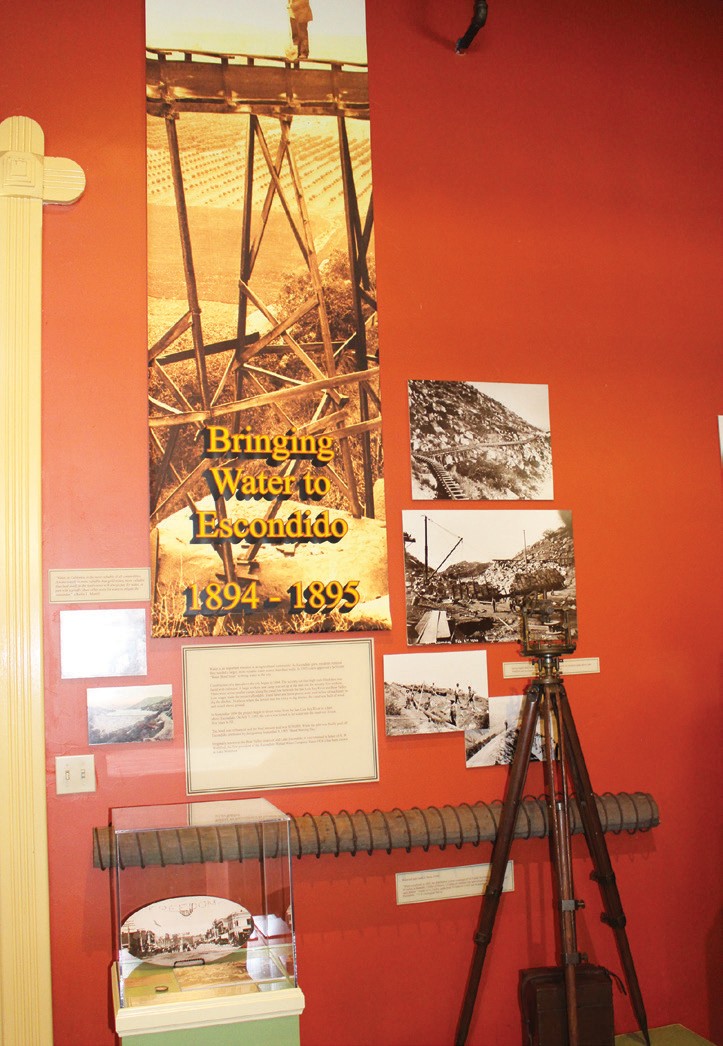 An upstairs exhibit on water at the Santa Fe Station.

and won’t be maintained by the city.

Right now the History Center is deeply involved in the planning stages for the Grape Day Discovery Festival that will be held October 1, and which she describes as being “Kinda old but new again.” One way it will be different is that it won’t be held in September, as the Grape Day Festival was for many years. That’s because they don’t want to interfere with other regional festivals that will be held on the same day that the old festival was once held.

David Ross has a master’s degree in military history from Norwich University.