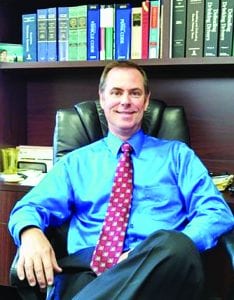 William L. Wolfe, a former homicide detective with the city and former county deputy district attorney who went off to labor in the private sector as a criminal defense attorney for many years has returned to be deputy city manager of Escondido, which is a position directly under that of assistant city manager.

The position had not been filled for three years when City Manager Jeff Epp approached Wolfe about returning to Escondido. “I’ve stayed in contact with my friends in the city all that time,” Wolfe told the Times-Advocate. “Jeff reached out to me and said ‘I have this idea. Would you consider it?’  For me, it’s like coming home, back to where it all started in a different role, in a grown-up role.”

Wolfe’s first days on the job were last week. This week he began visiting with members of the departments that he will oversee, which includes the code enforcement and parks departments.

According to Wolfe, “The city has historically had a deputy city manager.  Up until three years ago they always had a deputy city manager. I can’t tell you why the position went unfulfilled but when Jeff took over the office earlier this year one of the things he noticed was that there was a need for a third prong in the office and that’s when he looked out to me. They had borrowed a police lieutenant to do the job and the Police Department wanted its lieutenant back.”

Wolfe says he will be focusing on certain departments, including community development, code enforcement, and business licensing, which are, he says, “quasi-law enforcement positions.” “I will also take on the park rangers, which is also quasi law enforcement and I will do a couple of special projects. Hopefully with some outside eyes looking in we will see what we can do to make things operate a little more smoothly and get them the help they need.”

This week Wolfe met with code enforcement officers and talked to them about what he could to do to help them.

Wolfe has been a practicing criminal defense attorney in Vista for many years. He began his law enforcement career as a police officer, investigating a broad range of crimes. He served with the Escondido Police Department from 1984 – 1995.

During this time, he gained experience with everything from minor misdemeanors to complicated murder allegations. He also gained special training in collecting and preserving evidence, investigating accidents, child abuse offenses, juvenile crimes, sex crimes, and homicide investigations. Wolfe was also responsible for developing investigative programs that were recognized on local TV and in the news media.

While working as a patrol office Wolfe began taking night classes in the law. Wolfe graduated in 1992 from Western State University School of Law (now known as Thomas Jefferson School of Law) in San Diego and passed the bar in 1993.

Wolfe rose to the position of homicide detective before retiring from the force in 1995 to join the San Diego County District Attorney’s Office.

According to Wolfe: “In 1995, I was contacted by newly incoming District Attorney Paul Pfingst, who was aware of my law degree, and asked me to apply to the District Attorney’s Office as a Deputy District Attorney. I applied, and was hired, starting June 1, 1995. I worked as a prosecutor in the Juvenile Division, and the and the Family Protection Division in Vista.”

After four years as Deputy District Attorney he left to found the William L. Wolfe Law Offices in 1999 where he worked for clients in San Bernardino, Riverside, Ventura, Orange, Los Angeles, San Diego, and Imperial Counties.

Additionally, Wolfe not only taught criminal law and evidence at the Palomar College Police Academy, but also created and implemented a new academy class “Courtroom Demeanor and Testimony”, which is taught at many police academies to this day.

He has occasionally been featured as a guest commentator on Fox News.

Wolfe is currently a vice president for the Board of Directors for the North County Bar Association, and the only two-time recipient (2009, 2012) of the William Fletcher Award for service to the indigent community.

He currently volunteers for the American Combat Veterans of War, a non-profit group who serve the combat veterans with assistance in re-integrating into the community after returning from combat.

He is a 17-year resident of Valley Center his wife, Kathy, their bulldog and chickens. They have three adult daughters, and five grandchildren, who all live locally.