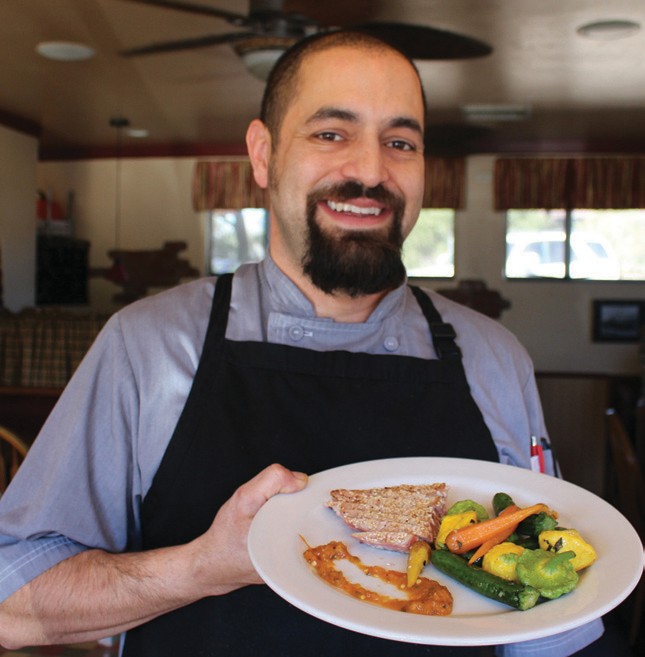 Portino’s Fresh Italian restaurant has always been known for the excellence of its cuisine. Its new chef, Ferdinand (“Call me Fred”) Vitale wants it also to be known for recipes that are healthy as well as tasty.

“We aren’t getting away from the Italian favorites that people come in here for,” but I’m adding a few things to the menu for those who don’t want to sacrifice flavor for healthy eating,” Vitale says. “A stereotype of Italian cuisine is that it is ‘heavy.’ I try to do healthy versions that use less heavy cream and more sour cream or yogurt. A lot of people don’t realize that heavy cream actually overpowers subtle flavors. I want to bring those flavors out.”

Many cooks add sugar to marinara sauce to cut the acid, but Vitale prefers to substitute crushed carrots, which made the sauce even less acidic, and thus more accessible for those who have sensitive stomachs.

He is trying to add some diversity to the menu with South African flavors and curries.

One new dish which is creamy, but not too creamy, and which brings out the fresh flavors is Vitale’s new lobster bisque, which is swimming in big chunks of fresh Maine lobster flown in fresh. “There is a lot of seafood that it is possible to get extremely fresh,” says Vitale. You’ll taste the sherry in the bisque as well as the sour cream and fresh chives.

He acquired the bisque recipe when he was at the Bernardo Winery. He also has recipes that he acquired when he was a chef at Truluck’s Seafood Steak and Crab House in La Jolla.

Another new dish is a seared ahi salad, with the ahi crusted in crushed sesame, seared medium rare and served with vine ripe baby vegetables purchased locally. The sushi-grade ahi is served with a sweet and hot sauce.

“I can’t do from farm to table, but when I can I get vegetables form local growers, such as Delfino’s,” he says. “Our produce is fresh as possible, as is our pizza dough, which we make here. Everything is as fresh as we can make it without actually butchering the beef ourselves.”

Vitale has been in the restaurant business since he was a child in Brooklyn, where he would bus tables, and began cooking at age 12.

“Many of our customers are surprised to known that we smoke all of the meat that we use on pecan and cherry wood,” he says. The wood smoke gives salmon, beef and chicken a very special flavor. “The chicken takes on the pecan flavor and the lobster takes on more of the apple flavor.”

One of Vitale’s new appetizers is a small smoked salmon pizza, made with salmon and capers.

“He’s a gourmet chef,” says Loralee Stephens, owner of Portino’s. “I would say that he is very passionate about his food. I also like the idea that he is very health-conscious.”

But you can still get some very delicious and decadent desserts at Portino’s, including a new line of gelatos, with all natural flavors such as pistachio, caramel, Tahitian vanilla and dark chocolate.