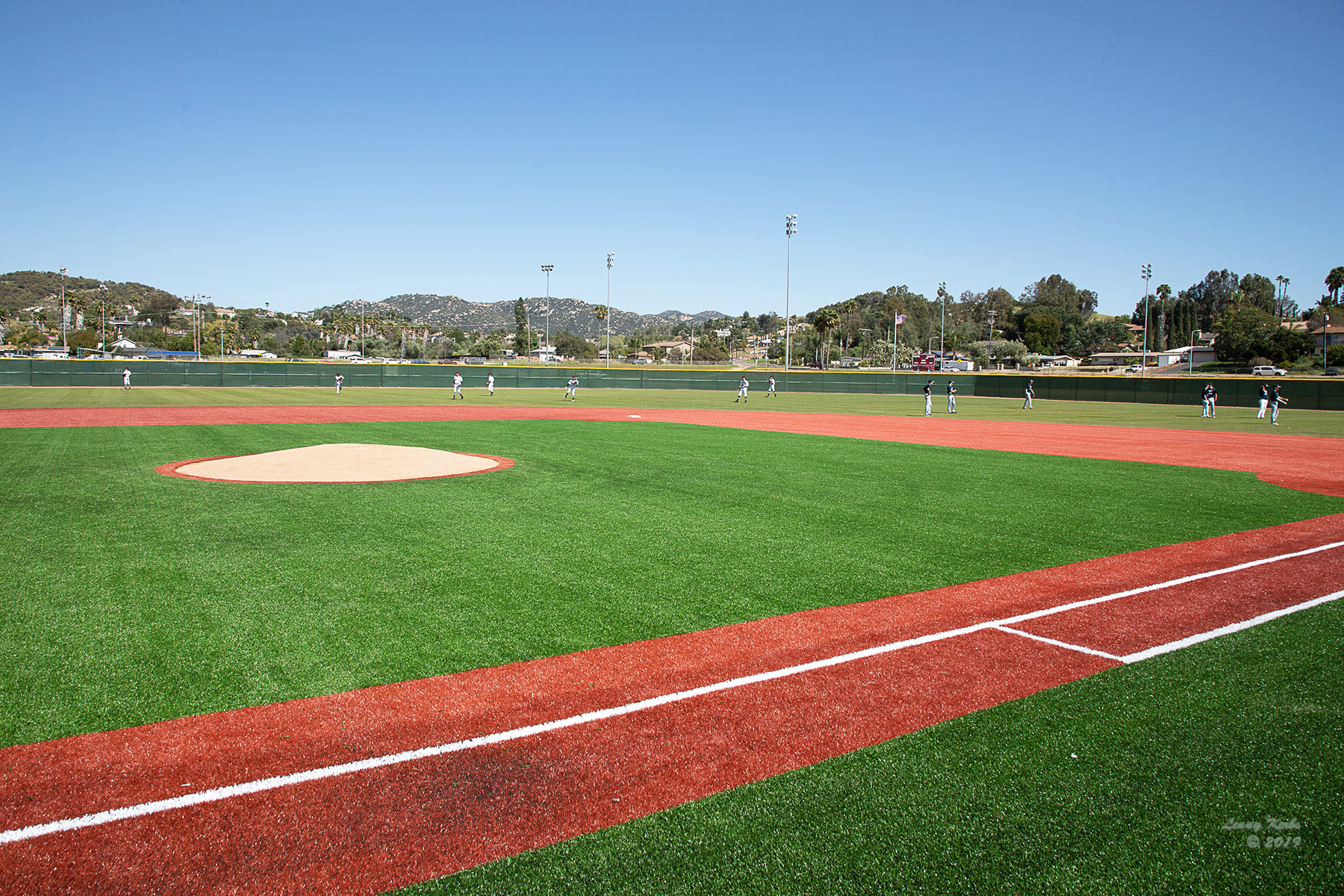 On March 10, the efforts of many civic minded individuals came to fruition with the grand opening and dedication of the new Hidden Valley Middle School and Escondido Charter High School baseball field located at 2700 Reed Rd. in Escondido. It will be simply known as the Hidden Valley Ball Field.

About a year in the making and at a reported cost of $650,000 dollars, it is a shining example of what can be accomplished when various elements of the community come together with the goal of doing something for the betterment and in the interests of local young people. 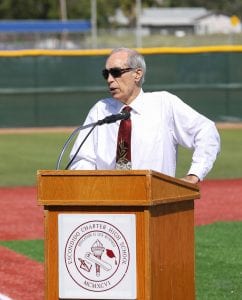 ECHS founder Dennis Snyder was the master of ceremonies at the dedication of the Hidden Valley Ball Field. Photos by Lenny Kerbs

The formal program included the colors being presented and the singing of the National Anthem. Conducting the proceedings was Dennis Snyder, the founder of ECHS. He thanked the dignitaries and interested parties in attendance as well as the maintenance and operation crews; all of whom played instrumental roles in turning what had been a promising vision into an impressive reality.

Proving that various entities can effectively collaborate with one another to get things done, the American Heritage Education Foundation and Escondido Union School District were responsible for spearheading this project.

The facility itself  rates high in many respects. With picturesque hills serving as a backdrop, the ballpark has a bucolic and spacious feel about it. The infield and foul areas adjacent to the dugouts are composed of a vibrant green artificial surface while the basepaths – where dirt is generally found – are reddish in hue and are also made up of a synthetic. This contrast in colors makes for a striking visual. 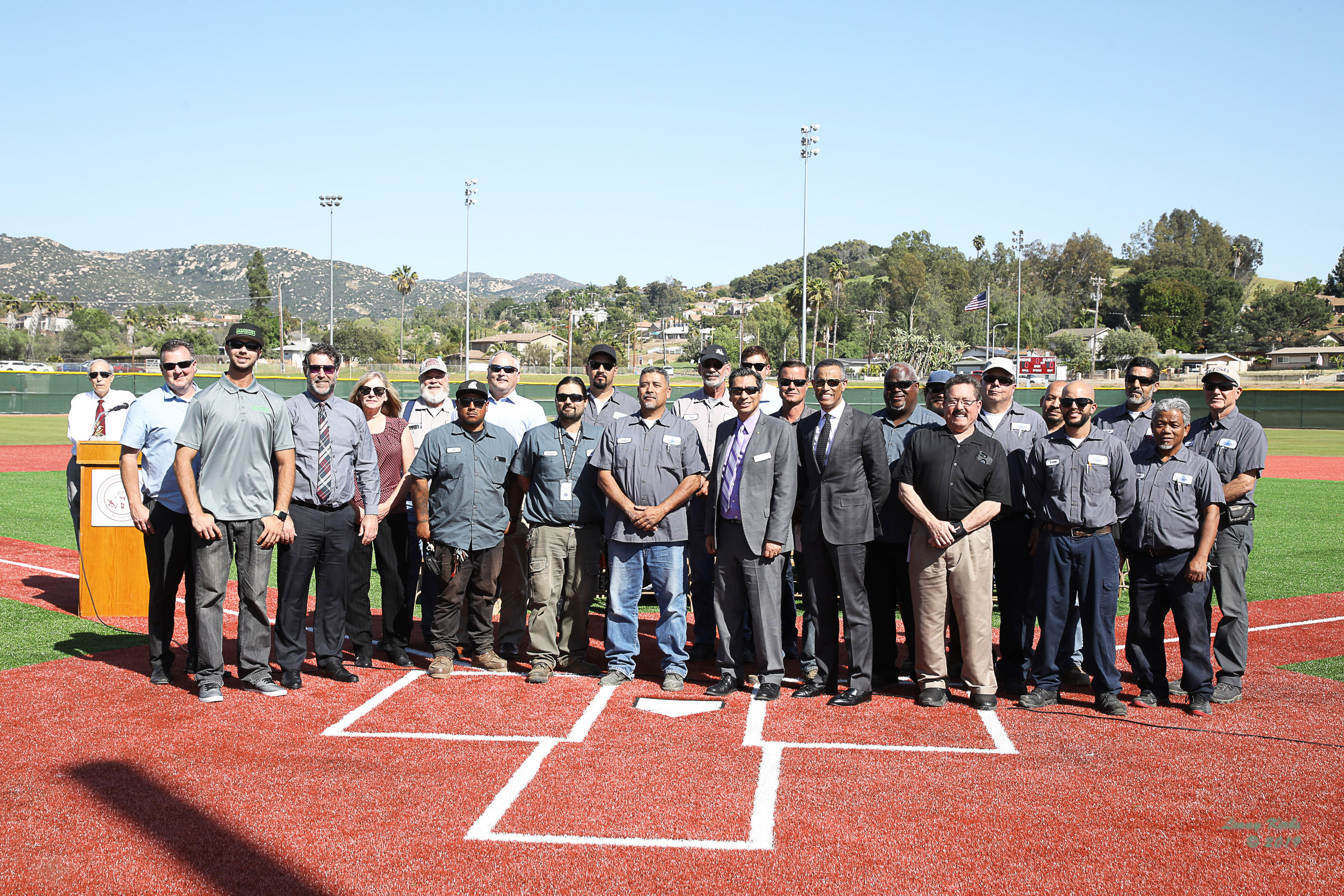 A glance at many of the people so instrumental in turning what had been a vision into a physical reality. Photos by Lenny Kerbs

Meanwhile, the expansive outfield is comprised of a low-cut natural grass with the respective bullpen areas being located down the left and right field lines. The green outfield fence, with a yellow home run line running atop it, gives the impression of being of standard height. A red colored scoreboard as well as flagpole can be found beyond the outfield barrier.

The dugouts are well covered and roomy while the stands, though on the modest side, are sufficiently comfortable and offer a great prospective from which to take in the action.

For the White Tigers of Escondido Charter, these pristine surroundings represent a massive upgrade from their previous home, an adequate but rather nondescript ball field located at Del Dios Middle School. The difference between where they’ve been and where they now reside is stark and dramatic. “This is a quality facility that will enhance the program and really add to our brand name,” said EC’s athletic director Greg Brose.

And so on a pleasant and slightly breezy day when hot hogs and apple pie were disbursed to the crowd, a terrific ball field was baptized and the White Tigers made their first appearance in their new digs a successful one with a 8-7 win over league foe Tri-City, it’s hard to imagine things having been any more idyllic. 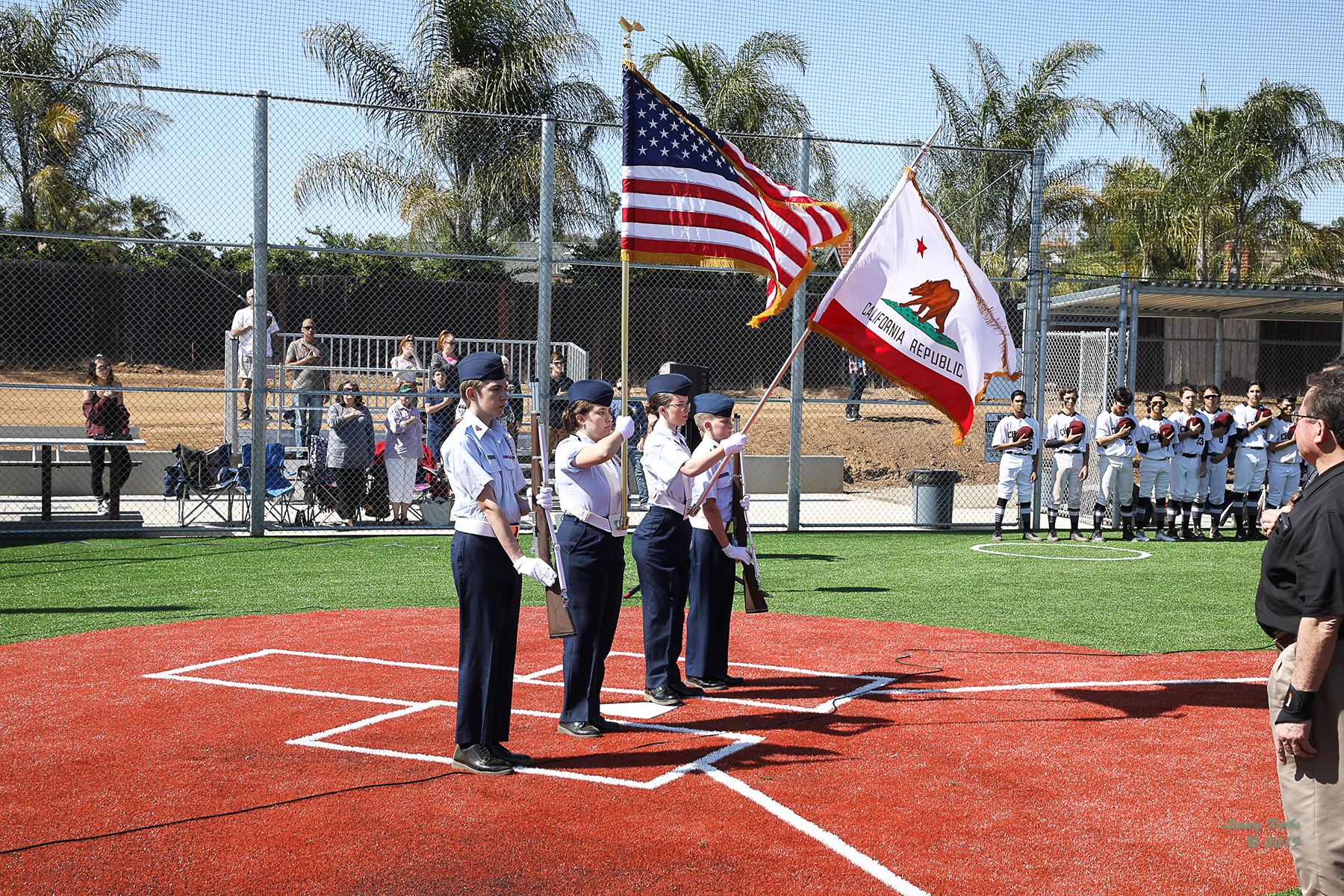 As both the EC team and fans look on, the colors are presented at the dedication of the ball field on Reed Road.

One response to “New baseball field dedicated in Escondido”