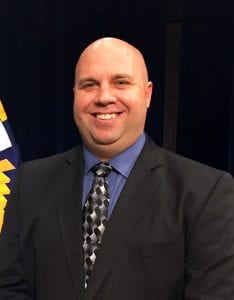 The Times-Advocate spoke with the new assistant chief on Tuesday.

Varso’s career in law enforcement started with the Los Angeles Sheriff’s Department where he worked in the jail system for a couple of years before being hired by the Escondido Police Department in 2001.

During his time at EPD, Varso has worked in or supervised every division the department has. That included patrol, canine handler, sergeant at the traffic division and, once he was promoted to lieutenant he oversaw the emergency negotiations team, worked in investigations and as public information officer (PIO.) After being promoted to captain Varso oversaw the Services Bureau, which includes dispatch and records among its remit, or as he describes them: “The people who work behind the scenes.”  Then last week he was promoted to assistant chief.

Varso has a BA in Criminal Justice from Waldorf University and an MA in Public Administration from California Baptist University of Riverside. Most recently he graduated from the FBI National Academy.

In some ways his responsibility will be similar to what he was doing as captain, overseeing the majority of the Services Bureau, including dispatch and the budget. Also the more collaborative efforts of the department with community-based organizations in the city. Such as the department’s strong partnership with the Escondido Education Compact, Interfaith and the city’s other departments such as Public Works and the Fire Department.

He will also be a very public face for the department. “Just last week I attended the Tots ‘N Trucks event and I will be out there saying hello to the public and hearing their input,” he said.

“I grew up in a small town and although Escondido is not the small town it once was, I have the same feelings at how a police department can operate closely with the community it serves. I look forward to that,” he said. Varso has been married for over 20 years to his wife, Amber. They have three children.