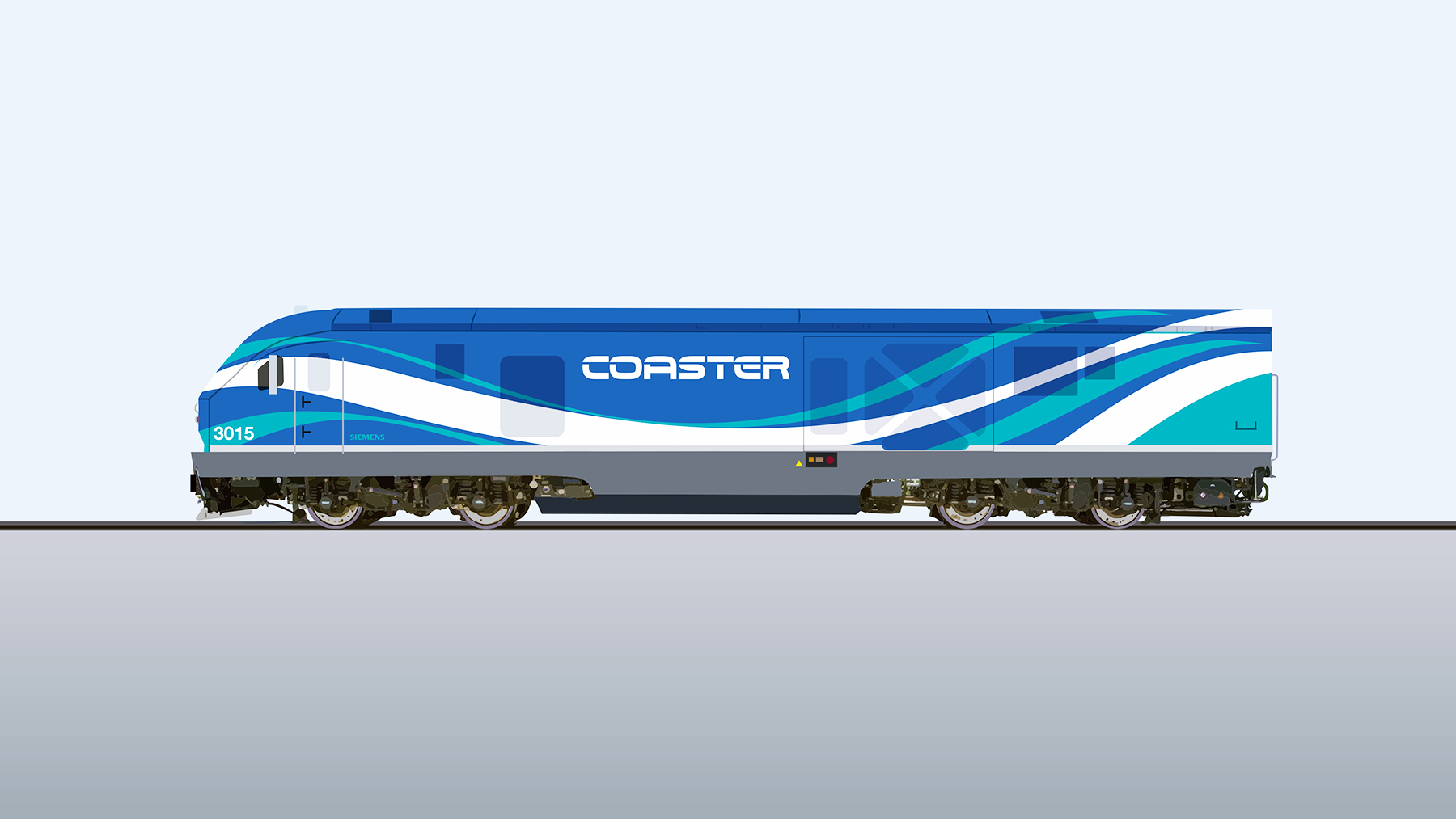 An artist’s rendering of one of the new locatives that North County Transit District will soon acquire.

The North County Transit District (NCTD) Board of Directors approved the purchase of five new Siemens locomotives at its June board meeting. The five locomotives being replaced were originally built between 1975-1992 and were purchased as used by NCTD. These five locomotives have reached the end of their useful life.

“These new locomotives will help support our mission to provide reliable public transportation to passengers throughout San Diego County,” said Bill Horn, NCTD Board Member and County Supervisor for the 5th District. “In addition to increased reliability, they will also incorporate new technologies that reduce emissions and will improve air quality in the region.”

The new locomotives will allow NCTD to improve operational efficiency while contributing to local and state sustainability and air quality goals, with an estimated 90% reduction in emissions (compared to the existing engines) and 16% reduction in fuel consumption.

“Businesses and commuters throughout San Diego County benefit from the convenience and the presence of the Coaster and they will benefit even more from these updated vehicles,” said NCTD Board Chairman Rebecca Jones.

“Our board is happy to welcome the new fuel-efficient and lower-emission vehicles to NCTD! We look forward to the enhanced service our passengers will receive from them,” said NCTD Board Vice-Chairman John Aguilera.

Janet Rogers, from the Train Coalition at Santa Fe Depot, noted, “The benefit of having cleaner-burning engines is of utmost importance to residents along the corridor. The new dependable equipment will thrill the thousands of Coaster passengers who rely on the trains every day.”

Approval from the Board enables NCTD to purchase the diesel-electric Siemens Charger locomotives as part of a multi-state procurement with the California and Illinois Departments of Transportation. This joint agreement saves money for the District due to lowered procurement costs. Additionally, the size of the procurement aids in the future acquisition of needed parts for continued operations as the same type of vehicle has already been purchased in multiple states.

“We are most grateful to NCTD for this order and extremely proud to supply these Californian built locomotives from our Sacramento facility, which currently has more than 1,300 dedicated and passionate employees,” said Michael Cahill, president of Siemens Rolling Stock in the U.S. “It’s a plant that is solar powered, making it even more energy efficient in terms of its overall sustainability footprint.”

The purchase of new coaster locomotives—priced collectively at over $37 million—has been made possible by State of California funding provided by new revenues generated from Senate Bill 1 (SB1): The Road Repair and Accountability Act of 2017 and $10 million of Carl Moyer grant funds provided from the Air Pollution Control District. Once the locomotives are received, NCTD is slated to add 36 additional Coaster trips each week to the current schedule—six on each weekday, three on Saturday, and three on Sunday. NCTD anticipates delivery of the first vehicle in March of 2021, and the last vehicle in June of 2021. It is estimated that vehicles will be put in-service three to six months after the delivery of each vehicle.