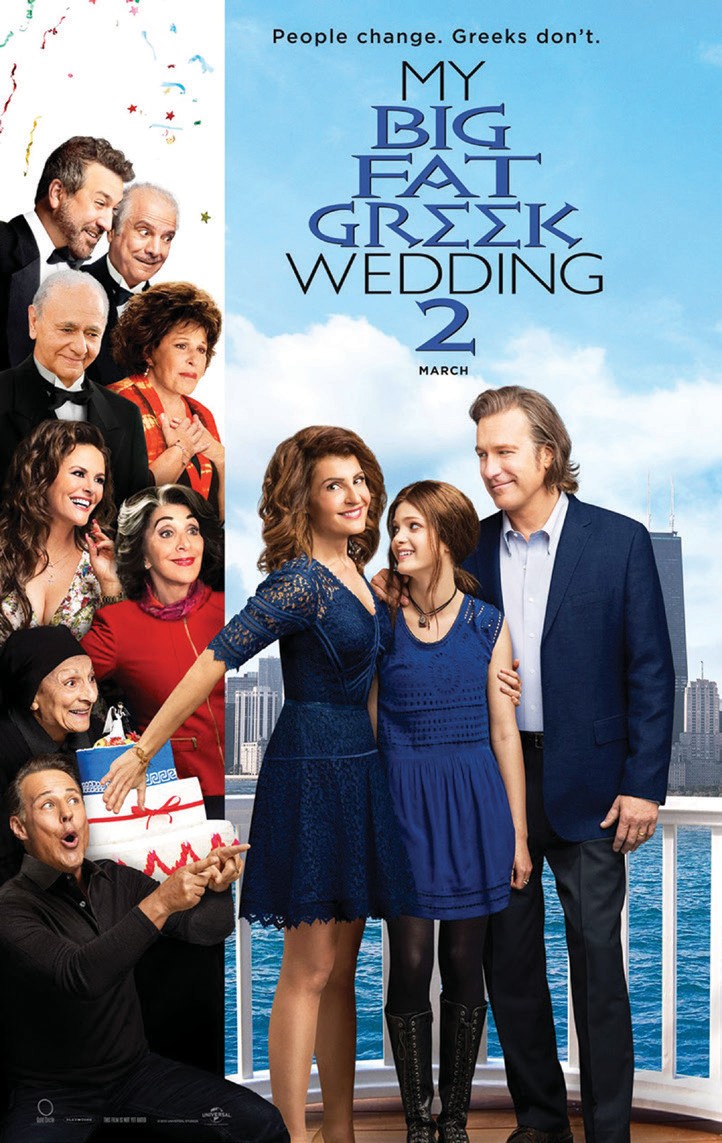 It’s hard to talk about “My Big Fat Greek Wedding 2” without talking about how little demand there is for it in 2016. True, the 2002 original made an astounding $241 million, setting a record for independent films and for movies that never had a weekend at #1 at the box office. But that was 14 years ago, and the movie wrapped up nicely with Toula (Nia Vardalos, also the writer of the film) getting mar­ried to her lover Ian (John Corbett) and having a daughter that they in­duct into Toula’s proud Greek family. There wasn’t much need for a sequel, and there was definitely no need for the disastrous TV series “My Big Fat Greek Life.” It looked like Vardalos was done in Hollywood, destined to go down as a one-hit wonder.

Promotion for the sequel was met with heavy skepticism. Surely Var­dalos was making a desperate cash grab to wring a few more pennies out of a franchise that she couldn’t ac­cept was long-dead. Is there really a demand for another round of Greek jokes and wedding jokes? Maybe not, but this is a sweet movie and we can always do with a sweet movie.

One of the running gags of these movies is that Toula is always sur­rounded by her large family. With a cast this large, there are going to be a bunch of little plot threads going everywhere, but there are three main ones. Toula wants to get the spark back in her marriage to Ian. Toula’s teenage daughter Paris (Elena Kam­pouris) is pulling away from the fam­ily and thinking about going to college far away. And Toula’s father Gus (Mi­chael Constantine) discovers that his marriage to her mother Maria (Lainie Kazan) was never official, meaning that they have to get married all over again. Hence the need for another Big Fat Greek Wedding.

The best thing about the movie is the chemistry among the family. Var­dalos has not lost a step when it comes to writing snappy dialogue; if any­thing she’s improved. The actors all bounce off each other nicely, consis­tently finding that precious balance of familial affection and tame animosity. I like the scenes where the guys all try to out-macho each other. The grandma (Bess Meisler) can get an easy laugh just by appearing in a scene. Young kids too, turn out to be surprising scene-stealers.

But this is not a great movie by any stretch. Often the story will slip into ro­mantic comedy cliché territory. Uh-oh, date night has gotten ruined yet again. Oh dear, elderly relatives are making PG-13 sex references. Whoops, Tou­la’s a lovable klutz who gets hit in the head with a stray volleyball (what high school gym in the world would actu­ally laugh at her over this?). And the plot is awfully overstuffed. A subplot about Gus’s long-lost brother could easily have been dropped, as could one about the romantic life of Toula’s cousin Angelo (Joey Fatone). You can practically hear Vardalos outlining the script and thinking “Hmmm, I need to give him a trait.”

Maybe it was smart for Vardalos to wait 14 years to do “My Big Fat Greek Wedding 2.” If it arrived on the heels of the original, it would have been called a disappointment (you can ar­gue if the original was good enough to live up to its own hype). But it seems to be comfortable with itself now that the pressure’s off. It’s an agreeable enough movie that it’s a good choice for date night or family movie night or if you just want a break from block­busters.

“My Big Fat Greek Wedding 2” is rated PG-13 for some suggestive ma­terial. Its running time is 94 minutes.