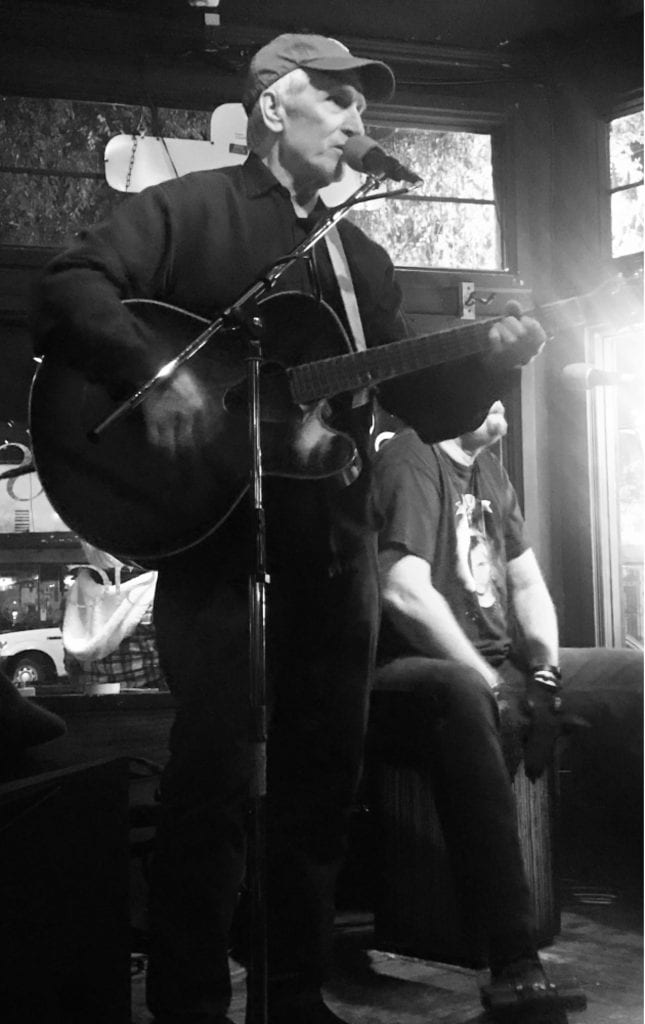 Lawrence Green, host of Open Mic night at O’Sullivan’s Irish Pub in Escondido, performs a song during his first set. Green has hosted Open Mic Night at this venue for the past 7 years.

“Welcome everybody to the show,” sings Lawrence Green, host of Open Mic night every Wednesday for the past seven years at O’Sullivan’s Irish Pub in Escondido.

This is his standard opening lyric to start the event, what follows may come as a bit of a surprise to newcomers, though not those who faithfully attend each week: “I bet you didn’t know I had a girlfriend who’s a zombie.” Not to be taken literally, of course (as far as anyone knows), Green recites the lyrics to “The Zombie Song” to begin his first set (his second closes the show with an “All Along the Watchtower/Stairway to Heaven” mashup) each week, much to the delight of the crowd.

“Without the Zombie Girlfriend song,” says bartender Danielle, “Open Mic night just wouldn’t be the same. It gets the crowd going and everything just follows from there.”

Exactly what follows is anyone’s guess, which, according to Green, is what attracts people to attend week after week. “You never know who is going to walk through that door and sign their name to play. We have singers, guitarists, flutists, saxophonists, full bands, comedians and who knows what else from all over the place show up to get on stage, play a few songs or tell a few jokes and keep the crowd happy.”

A native of New York City currently residing in Oceanside by way of Phoenix, Green continues to organize, host and perform at Open Mic night each week. He does it for his love of music, to enjoy new artists and give them a chance to show off their talents, as well as the excitement of seeing someone or something new. His great fondness for the venue itself, O’Sullivan’s; consistently voted among the best Irish Pubs in San Diego County each year, inspires him to continue in this role. “This place is amazing,” he says. “It’s a piece of Old Ireland and feels authentic. Even people who are from there and have visited here say the same. I wouldn’t change a thing.”

Throughout each evening at Open Mic, musical performers are typically allowed three songs; sometimes more if the crowd demands; at times less if the waiting list to perform is longer than time may allow.

Asked if he has ever had to pull somebody off stage, Green replies “Yes, unfortunately, but it’s more for being overly inappropriate than a lack of talent.” Among the most interesting acts Green has seen over the years are a mime, a Michael Jackson impersonator and an opera singer. Describing the latter, Green recounts “She had a huge voice, even without the microphone, and this place is a little small. It knocked me to the ground.”

Despite constant surprises such as these from newcomers, faithful attendees of Open Mic Night also enjoy performances from “regulars,” one being Andy, a local professor who plays ukulele and mandolin to the tune of The Pogues, REO Speedwagon, various 90’s pop hits and traditional Irish drinking songs.

A crowd favorite, evidenced by chants of “Andy, Andy, Andy” before taking the stage, asked why he chooses to perform each week, Andy cites the amazing O’Sullivan’s staff, the whiskey and, of course, his friends in the crowd.

He even offers advice to new performers just getting their foot in the door: “Make mistakes and embarrass yourself; it’s not the end of the world.” While this may be easier said than done for some, things could certainly be worse, having a Zombie for a girlfriend among them.

Open Mic Night is held every Wednesday night from 9 p.m.-Midnight at O’Sullivan’s Irish Pub in Downtown Escondido, located at 118 E. Grand Ave. For more information, contact the venue by phone at 760-737-0954 or e-mail at osullivansescondido@yahoo.com.