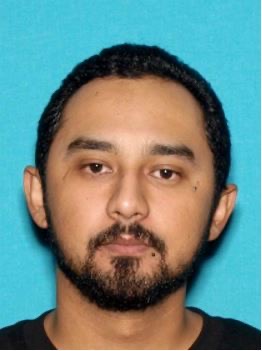 Escondido police are still searching for  a man who shot a police officer who was responding to a radio call of domestic disturbance early Monday morning.

A helicopter is circling the area of Reidy Creek, warning residents to be on the lookout for the suspect. Police from multiple agencies are assisting in the manhunt of Anastasia Rosas Jr., 27, who is believed to be armed and dangerous.

On February 22, at about 2:47 a.m., The Escondido police department was called to the 1300 block of Morning View Drive in response to a report of a domestic violence disturbance. Officers learned that the male involved in the disturbance left his residence with a high-powered rifle.

A county-wide call for mutual aid was broadcasted over the police radio. Multiple officers from agencies around the county have responded to assist with the search for the suspect.

The suspect is Anastasia Rosas Jr., a 27 y/o Hispanic male, 5’07”, 125 lbs., black hair, brown eyes, last seen wearing a black long sleeve shirt and shorts. He was last seen in the area of Morning View Drive and Lincoln Ave. He is believed to be armed and dangerous. If you see the suspect, call 911.

Multiple agencies are currently searching the area with the assistance of specialized units.