Mr. Jelly Bear, a passion for food and helping others 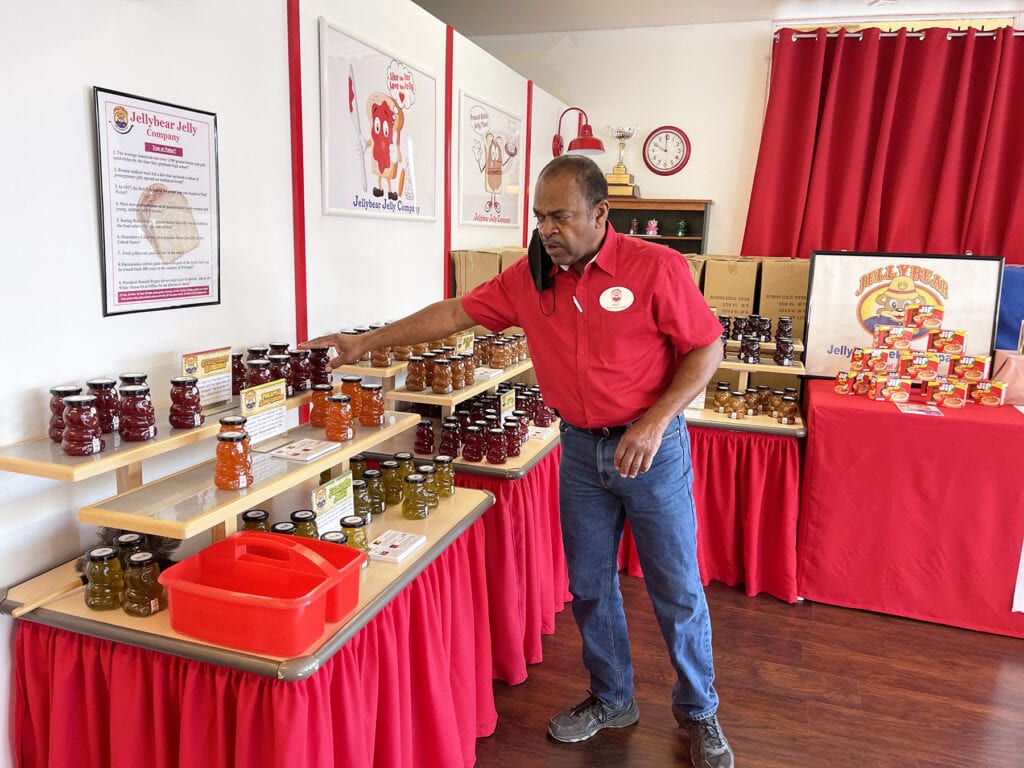 Jelly Bear carries 12 flavors of jams and jellies, all made in Matt Weathersby’s kitchen. Three of them are very spicy.

“I have a passion for jelly, more so for food,” Matthew Weathersby, proprietor of the Jelly Bear Jelly Co. in Escondido told me. He might as well say he also has a passion for helping other people.

Take the giant peanut butter and jelly sandwich that in 2014 Weathersby helped create  with students of  Coach Denny Snyder’s Escondido Charter High School. The 51-foot giant was made from 30 pounds of creamy peanut butter, 16 forty-ounce jars of jelly, and 25 two-foot loaves of bread. A feat that earned a place in the “Guinness Book of World Records” and a mention on Fox News and the Times of London.

Weathersby has always had a passion for food and took four years of commercial baking classes. He is an enthusiastic advocate of trade schools as a path to success.

The 28 year veteran of the San Diego Police Department operates a small store located in a strip mall 321 N. Ash Street. He retired in 2005 and even when he was still on the force he made a name raising funds for a police memorial in front of the headquarters.

He raised it with a publicity campaign that centered around a Cabbage Patch Doll, Avery Thomas, who went to the police academy and had many adventures along the way including being photographed inside of a mailbox with the caption: “I’m not going to box myself in.”

Weathersby has put on all sorts of food-related fund raisers over the years, such as the Guacamole Bowl contest he founded in 2004, and which will be held again this year, but in a much-truncated version, without any judging.  The 18th annual Law Enforcement Charity Guacamole Bowl, sponsored by Escondido-based Henry Avocado, will be held March 6 but only on wheels. The drive-through event will be held in Balboa Park.

It benefits Sports for Exceptional Athletes (www.s4ea.org), which is a spin-off of the Special Olympics. The event has raised $165,000 over the years.

This year was especially challenging in figuring out how to put it on at all, since there was no way they could bring all of the guacamole “artists” together for a competitive tasting contest—yet they wanted to duplicate some of the fun of the event. 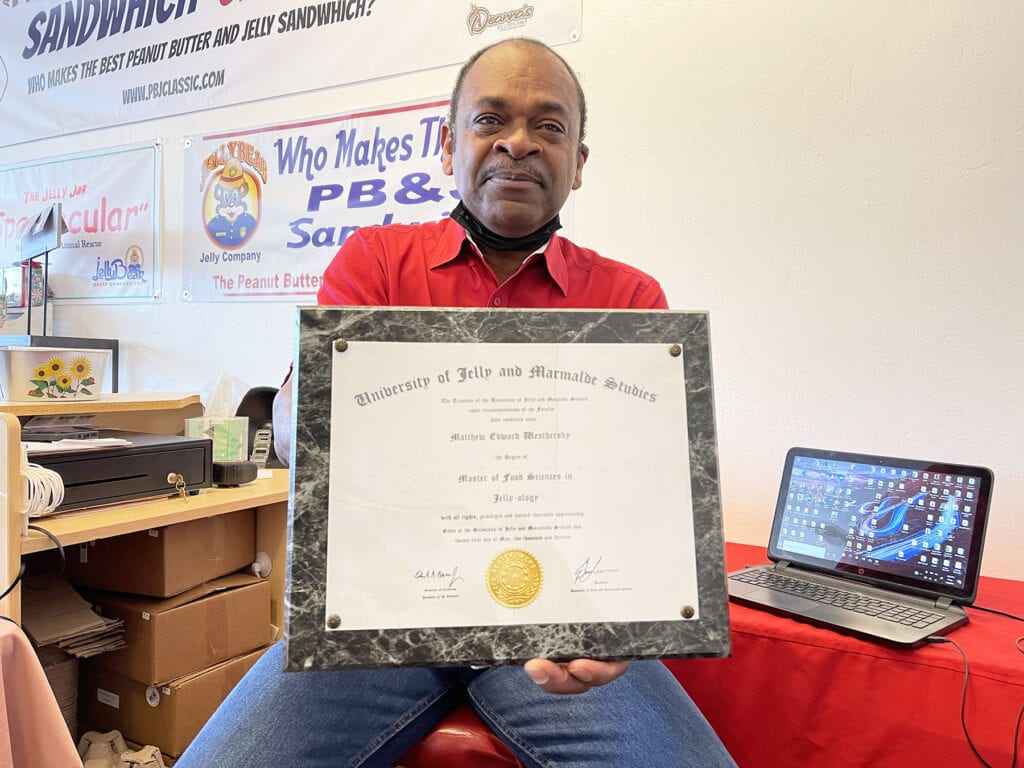 If you look closely you’ll see the Matt Weathersby is holding a diploma from the “University of Jelly and Marmalade Studies.” He likes to call himself a “master jelly-ologist” and says, “My major was in jams and jellies but my minor was in marmalade.”

Contestants will be provided with 12 inch by 12 inch boxes with all of the ingredients for making a championship guacamole, including six large Hass avocadoes, tomatoes, jalapeños, chips, lemon, lime and cilantro. The 300 boxes will sell for $25. “You’ll get a nice box of stuff,” he said. The boxes are donated by Kelly Paper.

Contestants will “judge” their own efforts and share their recipes. The top 25 will be put into a recipe book that will also be sold.

Mr. Jelly Bear opened his store in November.  He is basically a one-man band, doing everything. “My main program is restaurants and I wanted my own commercial kitchen,” he said.  Until he obtained that kitchen he was making his jams and jellies in his home kitchen, as was allowed under the 2013 Cottage Food laws. His home kitchen was the third such permit issued by the state of California. His garage filled with jars of sumptuous-flavored jams and jellies.

But he didn’t want to remain under the cottage food laws. The commercial kitchen allows him to work within the state’s Processed Foods regulations and to expand.

He sells flavors, including three hot flavors: Jalapeño Jelly, Strawberry Habañero, Pineapple Mango Habañero, with hotness at the 4-5 level out of a 10 (no idea what that is in the Scoville Heat Scale.) He uses strawberries from the famous Carlsbad Strawberry Fields. “They are my biggest customers,” he said. “I make it for them.”

His apple pie flavor is the most popular with customers. He also has a low-sugar (4 grams) peach cobbler jam that you’d swear is just as sweet as any jam you’ve ever tasted.

Other flavors are Grape Jelly, Pomegranate Jelly, Lemon-Lime Marmalade, Mandarin Orange Marmalade, Banana-Rum-Raisin Jam and Strawberry Margarita jam. He both uses his mother’s traditional recipes using only fresh fruits and all-natural ingredients, but to expand on them to create new ones. 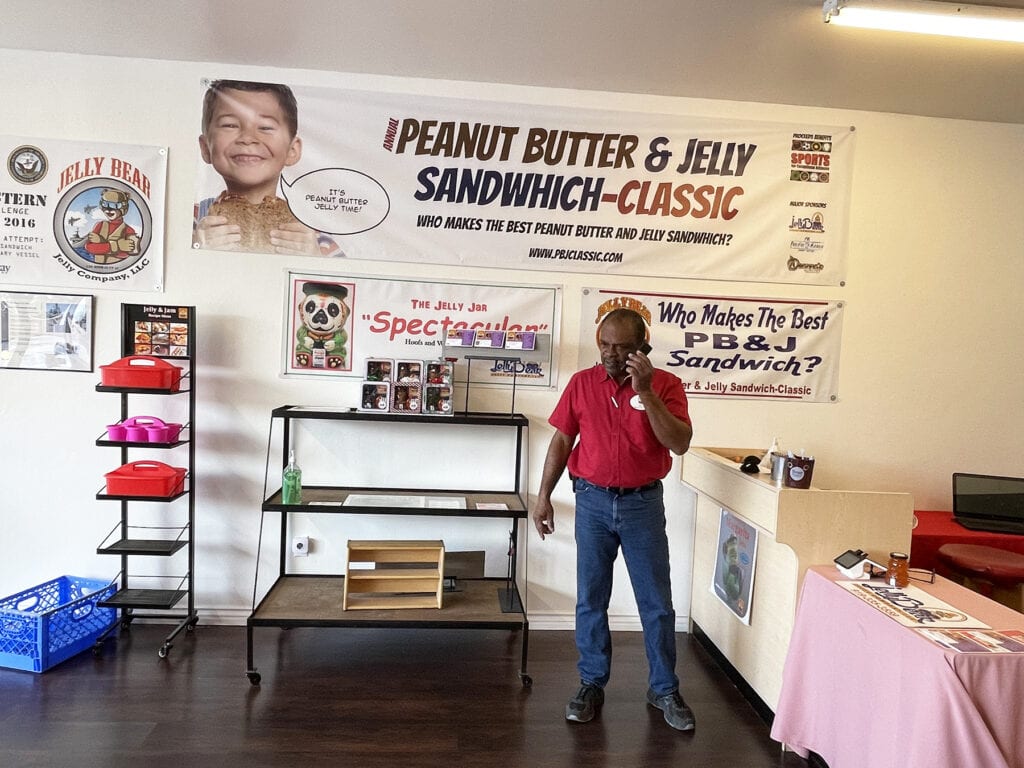 Weatherby enjoys sponsoring various contests that raise money for good causes. His feat of making the world’s largest peanut butter and jelly sandwich on the deck of the Midway museum in San Diego earned him a place in the Guinness Book of World Records.

“I have fun coming up with new flavors and hearing feedback on them,” he says.

On the morning I spoke to him, he had earlier in the week accepted a shipment of 54,000 bear jars from China. When you buy in that kind of bulk, you get a nice price per jar: 33 cents.

What is obvious by now is that Weathersby is having fun with all of this, and that includes calling himself a “master jelly-ologist” and having a “degree” from the “University of Jelly and Marmalade Studies.” He created that title.

He also created a special peanut butter and jelly sandwich called the “Elvis the King Sandwich” that was featured for a while on the menu of Suzy Q’s Diner (258 E 2nd Ave.) and which features his Banana-Rum-Raisin Jam as part of the recipe.

Two years ago he put on the Peanut Butter and Jelly Sandwich-Classic as a fundraiser for Sports for Exceptional Athletes. The winner, by the way, was San Diego’s Morse High School’s “Hungry Tigers” winning sandwich, “a Thai chicken, with a mandarin orange marmalade glaze, peanut butter and finished in a panini press.”

“I do something different every year,” he said.