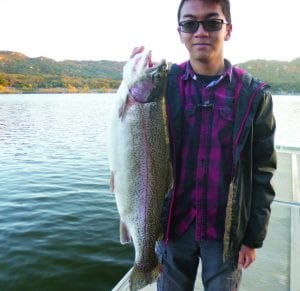 Big fish of the week belonged to Nathan Orn of San Diego who caught a 7.10-pound trout.

The trout fishing has been extremely good with many limits being recorded by mid-morning. Boat Dock Cove and Willow Cove have seen the most action. The last plant was December 20, when 1,500 pounds of Rainbow Trout were put into the lake. The next plant, of 3,000 pounds of Rainbow Trout will be planted January 3.
Big fish of the week belonged to Nathan Orn of San Diego who caught a 7.10-pound trout on powerbait at the East Buoys. Other catches of note included; Brian Park’s 6.80 pound and Rob Nelson’s 6.30-pound trout. Throwing kastmasters, jigging powerworms, or using floating bait, mouse-tails or power-bait (green or yellow), is what is working best right now, according to Ranger George Scalo.
Park hours: 6 a.m. – 5 p.m. (Open seven days a week.) s
Dock closes: 4:30 p.m.
Water temperature: At surface 54.32 f., 7.43 D.O. @ 10’ 54.68 f., 7.22 D.O.
Water level: Low level, private water craft are currently banned.
Due to the threat of Quagga mussels, there remains a ban on private water craft and equipment. Restricted equipment includes; private boats, canoes, kayaks, float tubes, trolling motors, fish finders, anchors, and other equipment that contacts the water.
Permits and Boat Rentals are now issued by a machine located at the Ranger Station. The machine can take cash (no $50 or $100 bills), debit, or credit. Note: They do not sell fishing licenses, bait, or tackle, so anglers must acquire these essentials elsewhere prior to their visit. The lake is offering $20 all day motor boats to seniors on Tuesday and Thursdays and to active military every Saturday.
Largemouth bass can be found lurking around structure. They hit swimbaits, frogs, crawdads, and dark colored plastics.
Each month Whopper Contest winners in four categories are awarded a free fishing and boating permit. For information on the contest or fishing conditions, contact the Ranger Station at 760-839-4346.
To view current fish photos, visit www.wohlfordlake.com