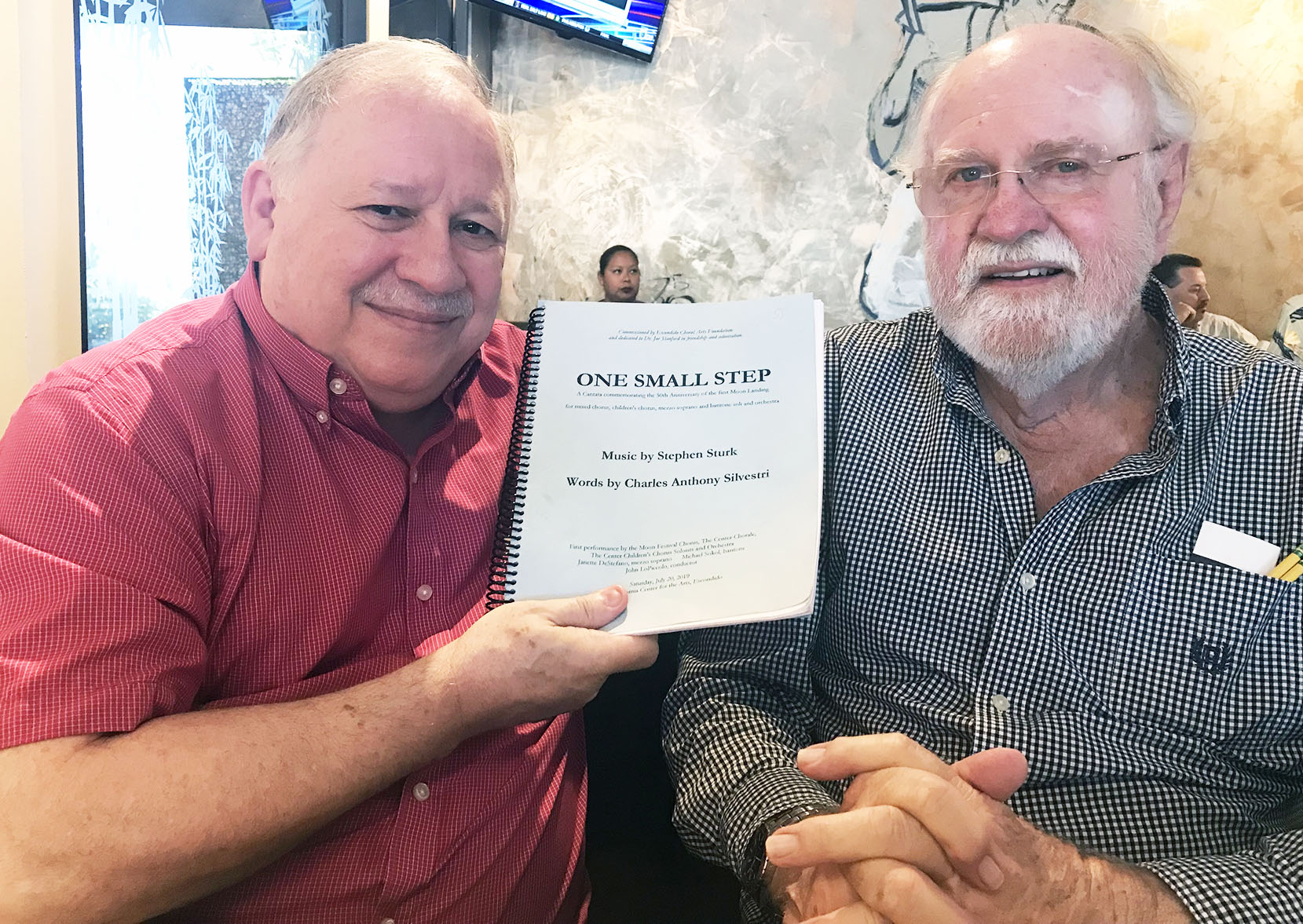 Stephen Sturk, composer of “One Small Step,” and Joe Stanford, artistic director of the Escondido Choral Arts Foundation. Sturk holds the full score of the “One Small Step” cantata that will be premiered Saturday at the California Center for the Arts, Escondido.

The world premiere of the choral work “One Small Step”  by local composer Stephen Sturk and lyricist Charles Anthony Silvestri and conducted by John LoPiccolo will be performed by Escondido Choral Arts Saturday at the California Center for the Arts, Escondido Concert Hall. The concert begins at 7 p.m.

This week I sat down with composer Stephen Sturk, who lives a few blocks from the art center where his work will be premiered.  Joe Stanford, artistic director of the Escondido Choral Arts Foundation, joined us.

Choral groups from all over the county contributed artists—a total of 22 church, temple and college choirs—to create a chorus of about 100 voices, including 16 children. This was because the Escondido Chorus doesn’t normally meet during the summer. However, there is no getting around the fact that the 50th anniversary of “The Eagle has landed,” is July 20.

The 42-piece orchestra is drawn from musicians from all over the region. “We couldn’t afford to hire an orchestra,” said Dr. Stanford. “We asked the musicians to do it gratis.”

The composer described the process that produced “One Small Step.” “It was about a year ago that I started work on the cantata,” said Sturk. He had been talking to lyricist Charles Anthony Silvestri about commemorating the 50th anniversary of the moon landing. “He is a very well-known author of poems and librettos.” They decided to join forces to celebrate the event.

Around the same time Joe Stanford and Sturk began talking about wanting to do such a commemorative production.

Amazingly enough, when I interviewed him, Sturk hadn’t yet heard his piece performed, even in rehearsal. That happens this week. “I can understand what an expectant mother goes through,” he said. “This piece has been gestating for nine months and I can’t wait for it to be born!””

He recalls, “We gave Tony until November 1 to finish the text. I wanted the text as my inspiration. Not everyone works that way, but I do. At first I think about the text. I read it over and over. I immerse myself in it. I lived with the text for a month and then I began to work.”

Sturk works very late at night. “I’m not a morning person,” he said.

Sturk is mainly a composer of church music. “This was a different challenge for me,” he said. “I looked at the text to identify signature themes we would use in the piece.” He decided the two main soloists would be a mezzo-soprano who would play Luna and the baritone (actually a high lyric baritone) who would sing the composite of the astronauts.

“Luna is the sexy siren,” said Sturk. “During the flight she sings ‘Come to me!’ I think that is the exciting part of the piece. Hopefully, the music will sound seductive.”

Each soloist has an instrument assigned to give them a unique sound. Luna’s instrument is the vibraphone; the French horn and timpani identifies the astronaut.

Sturk employs the tonal scheme of B flat for the Earth and the astronaut and C Major for the moon and Luna. “Occasionally they clash to create an outer space sound,” he says.

Eventually Luna and the astronaut meet when the lunar module touches down on the surface.  She sings and he sings and eventually they sing together.

This show has multimedia elements to it. Early in the piece it combines video of President John F. Kennedy intoning, “We choose to go to the Moon in this decade and do the other things, not because they are easy, but because they are hard!” and other inspirational words.

Previous concerts of the Escondido Choral Arts Foundation have also employed multimedia. “I like to incorporate dance and video,” explains Dr. Stanford.

Sturk began composing “One Small Step” in the middle, the fifth movement. “The text is divided into sections,” he said. “The first section I composed was the fifth, which is the ‘Lift Off!’ It features themes I was also able to incorporate in the rest of the piece.”

The Fifth movement is the “audience participation” element of the cantata. Audience members will be invited to stamp their feet and make noise as the rocket prepares to leap into space.

The cantata is 45 minutes long, which Sturk says is the longest piece he has ever composed. It will come in the second half of the concert. The first half will include excerpts from Haydn’s “Creation” oratorio. Coincidentally, the “Creation” was the first choral piece that Sturk sang in a choir.

Tickets can be purchased at the CCAE box office for this one-time only experience. 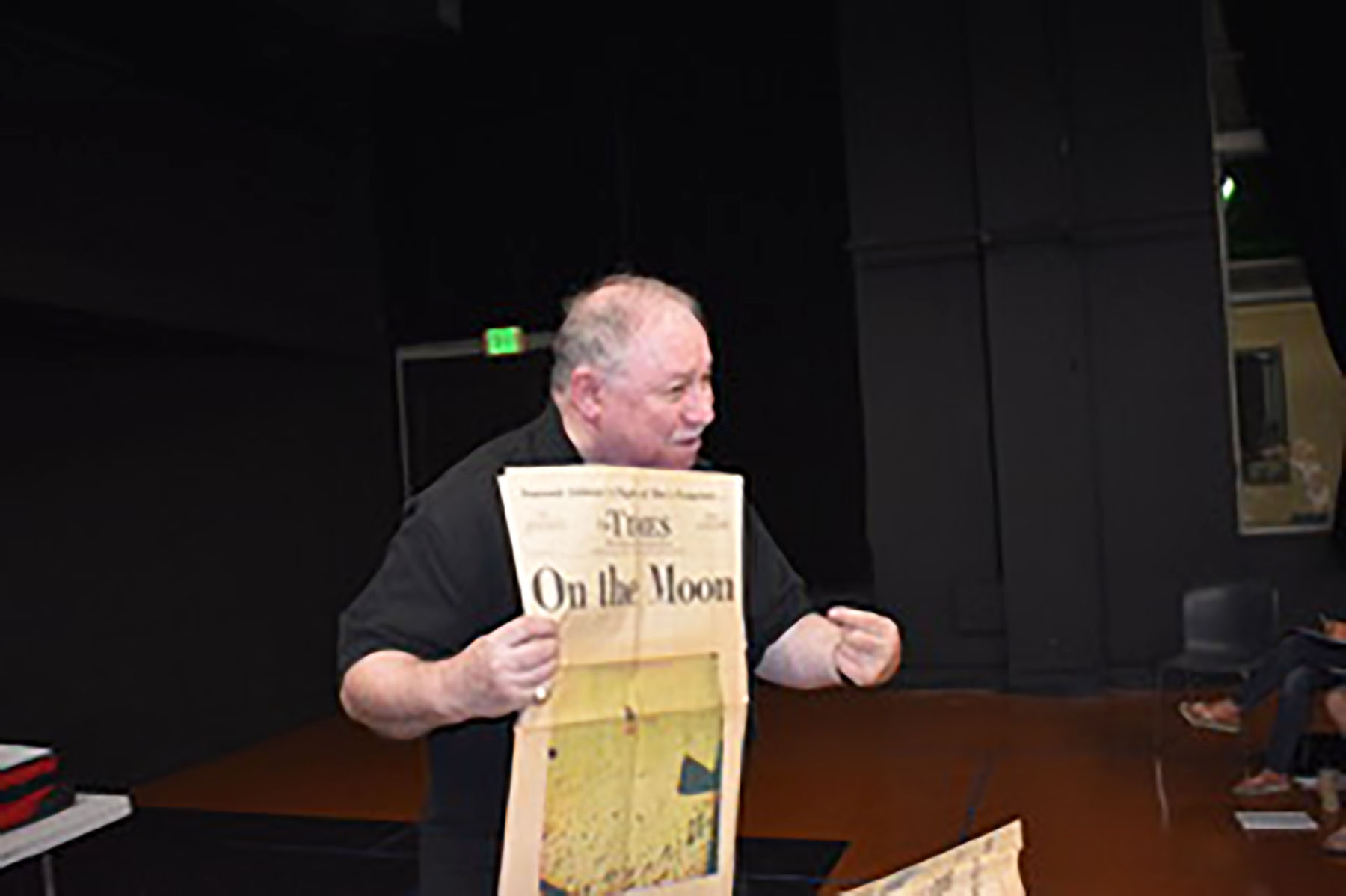 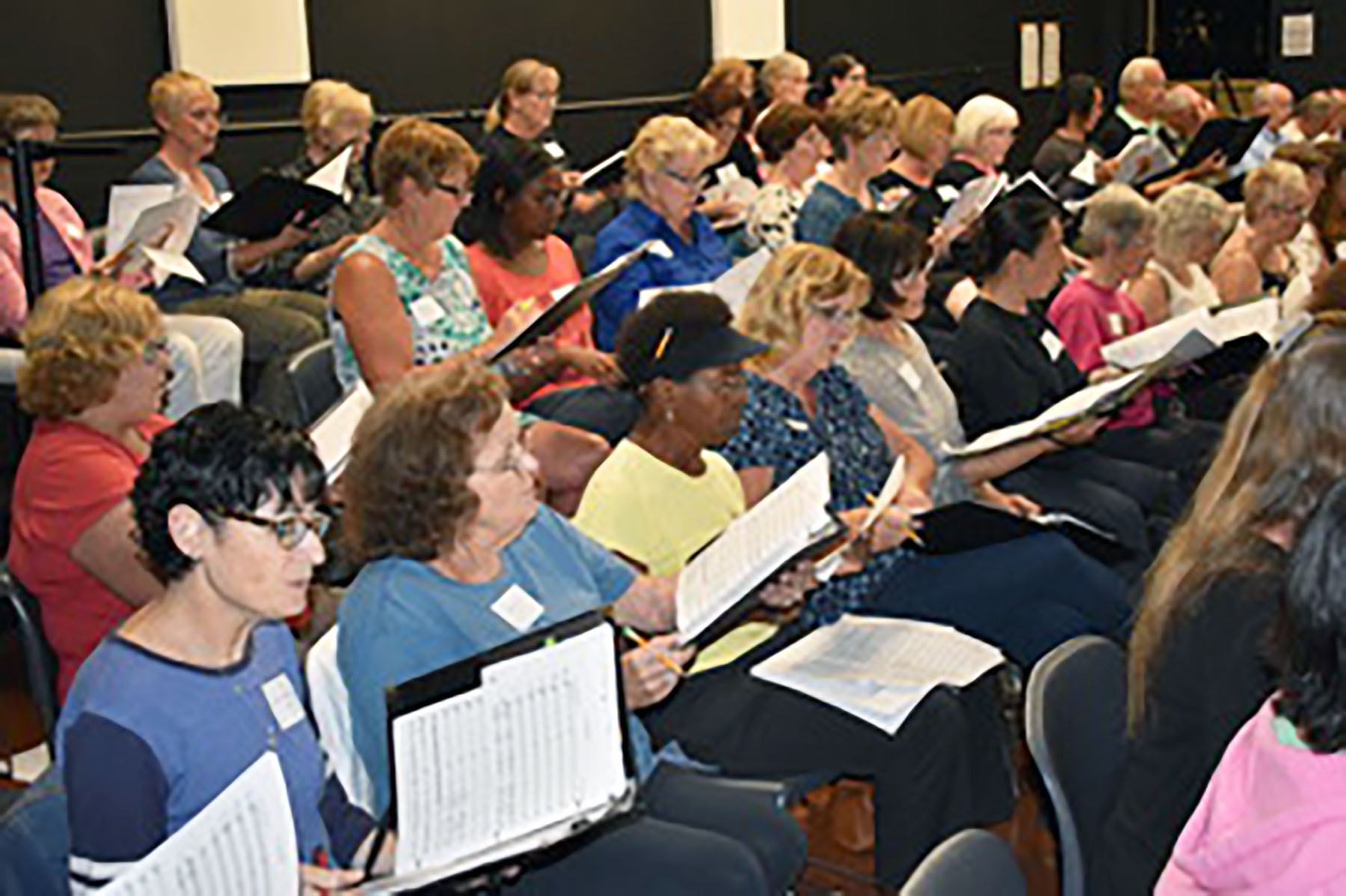