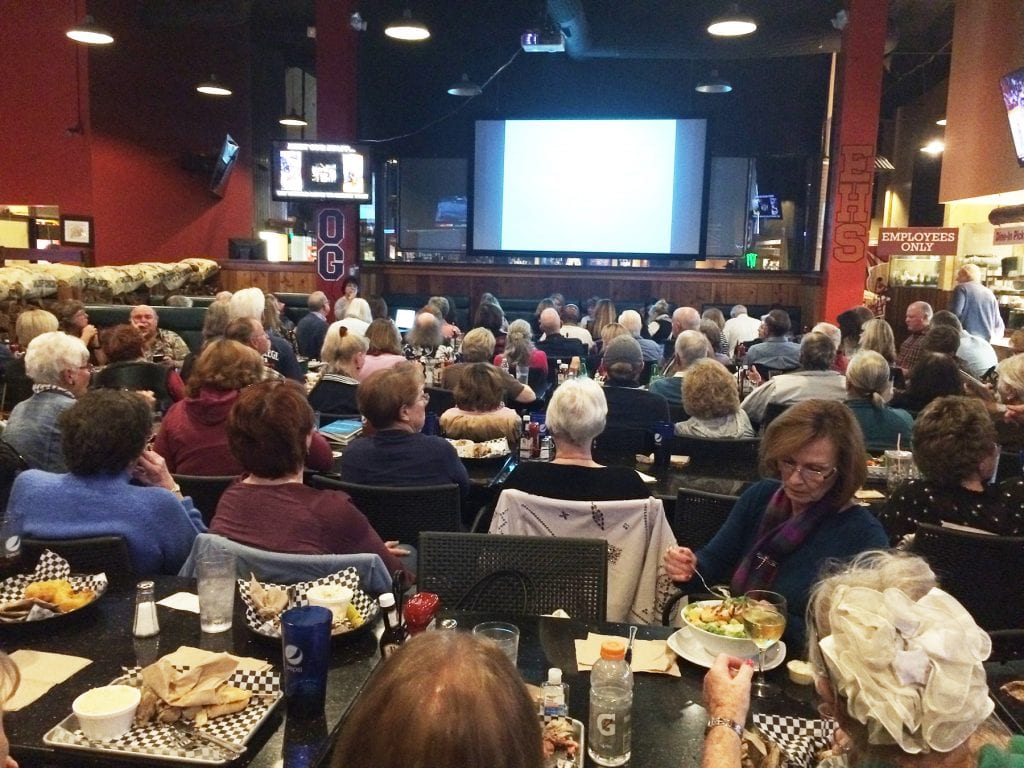 A capacity crowd to hear from the Election Integrity Project.

About 200 Escondido and other local residents Thursday night filled the reception room of Mike’s BBQ to overflowing to hear Ruth Weiss and Linda Paine of the Election Integrity Project. They talked about voter fraud and their recent court victory that forces California to purge voter rolls of possibly millions of inactive names.

You get a sense of what the Election Integrity Project California, Inc. (EIPCa) is all about if you click on its website ( www.eip-ca.com). You see an image of the California Bear Flag with the motto superimposed over it: “Grand Theft Election.”

Weiss and Paine worked on this project for more than eight years, without getting much media attention. Eventually the conservative activist group Judicial Watch saw what they were doing and decided to back them.

EIPCa, assisted by Judicial Watch as its attorney filed a lawsuit in August of 2017 that alleged the defendants, Los Angeles County and the state of California were not following the requirements of Section 8 of the 1993 National Voter Registration Act (NVRA). NVRA requires states to reasonably maintain state and county voter registration rolls.

On January 4, a week before they spoke at Mike’s BBQ, EIPCa announced the settlement of its lawsuit: that the Los Angeles County Registrar-Recorder/County Clerk, immediately begin to follow federal mandates for identifying and removing deceased, moved and other ineligible registrants (as many as 1.5 million inactive registrants) from the LA County voter rolls. The settlement also requires the California Secretary of State, to see that similar actions are taken by each County Registrar throughout the Golden State.

The mandates of this settlement, when performed, will bring California into federal compliance as is required of other states.

The lawsuit was prompted after EIPCa’s data analyst team discovered that the number of registered voters in at least eight California counties exceeded 100% of the eligible population. Los Angeles County had the largest number of registrants, over 100% with about 482,000 people more than those eligible to vote.

Weiss is vice president and director of education and training for Election Integrity Project California; Paine is president and co-founder.

Paine told The Times-Advocate, “The mission of the Election Integrity Project is to restore fair and honest elections in California. We do that by researching voters’ rolls county by county; compare those to death records, to determine if California is compliant with state and federal guidelines.”

According to Paine and Weiss, California has not been compliant with federal guidelines for 20 years because it was given permission to not comply with NVRA during the Clinton administration. NVRA requires that a state MUST remove inactive names. The federal government at that time told California that it MAY remove such names.

“This mandate to follow federal law and properly maintain the voter rolls is a critically important win for the citizens of California and the country,” said Paine, “because it will make vote fraud more difficult to commit.”  She added, “It’ a huge win.”

The lawsuit followed on the heels of Husted v. A. Philip Randolph Inst., in which the U.S. Supreme Court ruled the process Ohio uses to remove voters on change-of-residence grounds does not violate the National Voter Registration Act.  Jon Husted  was the Ohio Secretary of State.

Husted had made a settlement similar to what California just made through Judicial Watch to clean the Ohio voter rolls and was challenged on that. The high court upheld Ohio’s way to clean the voter rolls.

Critics of this approach are concerned that the state may unintentionally remove  legitimate voters. “They are erring on the side of caution,” said Paine. “The problem is you end up with millions who shouldn’t be on the rolls.”

According to Weiss, many on the inactive list can be deceased or moved, which would make the names illegitimate. “One of the solutions would be photo voter ID. If that person voted that person would be ID’d as non-deceased,” she said. 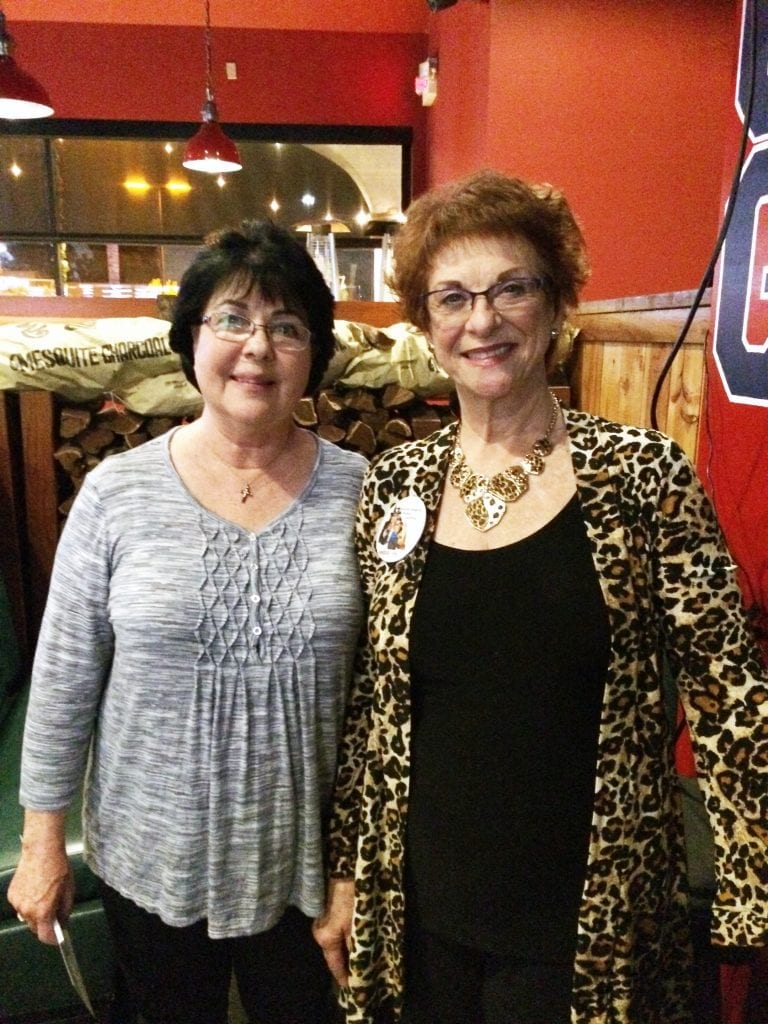 Linda Paine (left) and Ruth Weiss of the Election Integrity Project spoke to a capacity crowd Thursday at Mike’s BBQ.

Weiss and Paine have turned their attention to California’s 2018 election results. Weiss said, “Our biggest concern for 2018 is that we have reports of hundreds of thousands of vote by mail voters who didn’t get their ballots. People were told that their registrations had been changed. We have citizens who relayed to us that they went [to their polling stations] with provisional ballots and were told their votes had already arrived and been processed. That means those votes were intercepted. In that case, the voter must vote provisionally, which then must be tossed out because a provisional ballot is not counted if there is an official ballot.”

Proving actual voter fraud, “was a difficult bar to cross,” said Weiss. “What you need is to remove the potential for fraud. You don’t wait to fix a hole in a sidewalk until after someone breaks a leg.”

Weiss and Paine were at Mike’s BBQ to talk about the recent settlement they had just completed with the Registrar of Voters of LA County. “They are mandated to follow the law,” said Weiss. “They have to begin the process immediately.”

Weiss added, “Those requirements are that those who haven’t voted in two general elections must be sent cards. If the registrars don’t get the card back, they must remove them from the rolls. LA has 1.5 million on inactive. Of those, four hundred thousand must have the cards sent to them.”

The same will be required of the entire state, said Weiss.  The last time they ran the data, in 2017, Weiss and Paine found 3-4 million inactive voters in the state.

They also have concerns about the recently passed Voters Choice Act. “It’s going to be huge,” Weiss said. “It gives each county a choice to keep traditional elections or convert to vote centers. Five counties went to vote centers in 2018. It is the great desire of the legislature and Secretary of State for all counties to adopt vote centers,” she said.

The Voters Choice Act, passed in 2016, according to the Secretary of State, “will modernize elections in California by allowing counties to conduct elections under a new model which provides greater flexibility and convenience for voters. This new election model allows voters to choose how, when, and where to cast their ballot by:

• Allowing voters to cast a ballot at any vote center within their county.”

When that happens, said Weiss, neighborhood polling places will cease to exist. “Instead,

each person will receive a mail ballot whether requested or not. Given the situation of voter rolls, that’s a problem. That creates a smoke screen, that when you put up to ballot harvesting law, allows for illegally harvested ballots.”

Under the Voters Choice Act vote centers now allow ballots to be dropped off or to do same day registration and voting. Voters will also be able to cast ballots in person.

“The difficulty is that the information is not getting out to the voters in time and they assume they can only vote by mail. Processing of mail ballots is very imprecise,” said Weiss. Such ballots are sent 29 days in advance and voters have until 8 p.m. on election day to get them postmarked. They can arrive at the balloting center three days later and still be counted. “If you vote at the vote center and your mail ballot arrives later, it is cancelled,” she said.

Paine said, “We would like to challenge the ballot harvesting law, and the Motor Voter Law and Prop. 2 that have destroyed the integrity of California’s elections. We’d like to audit vote by mail ballots. We really believe that to determine if the 2018 election was legitimate, there is a possibility that tens of thousands or hundreds of thousands of vote by mail may have been cast, and that may have impacted many races across the state. Not just for Congress but every jurisdiction in county and state.”

EIPCa is already talking with a public interest law firm that will focus on a federal level lawsuit. “It is that there is an issue with California’s’ elections,” said Paine. “We have worked in the dark and been ignored for eight years. Now the issue is now going to be taken seriously.”

The narrative nationwide has been that there is no provable voter fraud, said Paine. “We have been screaming in the dark, saying that we have it. Now we have a ruling that shows that there is a potential for voter fraud. Now it’s OK to talk about it and tell the truth about what is really there.”

Paine emphasizes, “This is a message that all California citizens should hear. The media is not carrying this story. We have trained about 9,000 citizens to observe elections and comment what happens. After eight years people wondered if it did any good. It did. So we can see a turnaround in California’s elections.”

Paine adds, “We will have oversight in whether California and Los Angeles County are complying. We are researching what is there and what is happening. If we determine that the state and county is not compliant, we can go directly to the courts.”

EIPCa is looking for volunteers and donations to help it expand its data team. It is a 501 (c) 3 nonprofit. Visit the website at www.eip-ca.com where you can volunteer, donate or become educated. You will find links to the original lawsuit and settlement agreement.