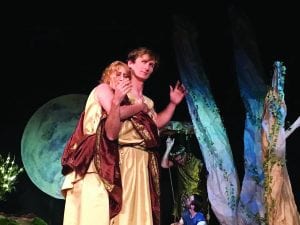 Five married couples come together to create the magic of “A Midsummer Night’s Dream.”

No magic flower was needed to bring real-life couples and their talents to the stage in the Shakespeare comedy “A Midsummer Night’s Dream,” finishing its run this weekend by the Community Players Theater, Bailey/Bees Theater at Community Lutheran Church.

Set in Ancient Athens and in the realm of Fairyland, Oberon, the King of the Fairies and his knavish sprite, Puck use (and misuse) an enchanted flower that makes one fall in love with the first person they see.

With their love of theater and each other, the production has become a family affair as husbands and wives perform onstage and behind the scenes.  Andrew & Kristin Morales play Athen’s Duke Theseus and Hippolyta, Queen of the Amazons who are soon to wed.

Oberon and his wife Titiana are portrayed by husband and wife, Brandon & Heidi Phelps.  Michele Brindle is Egea with husband Chris as Robin Starveling, one of the hapless actors in the Play within a Play scene.  William Buckwalter is the mischievous Puck alongside his expecting wife, Caitlyn who is contributing behind the scenes.

Finally, Daniel Robinson plays the betrothed but jealous lover, Demetrius under the direction of his real-life wife, Chelsea who was recruited by producer Chris Ryan to create the mischief and mirth that is “A Midsummer Night’s Dream.”  The couples anchor a talented cast and crew, the show runs through August 6.

Bailey/Bees Theater at Community Lutheran Church is located at 3575 E. Valley Parkway, Escondido. Ticket info: 858-335-1486 or clcfamily.org/theatre/ Tickets are also available at the door for $12-$15.