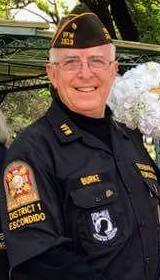 The world lost a friend on Mar 9, 2018 – Michael Elmer Burke – and is a sadder place because of that loss. Many called Michael their friend, since he touched so many lives in so many ways. He will be sorely missed by family, friends and loved ones – particularly by his wife Gina.

His interests were varied, having attended Clayton Valley High School, Concord, California; Diablo Valley Community College in Pleasant Hill, California; graduated from the University of California Berkeley in 1971 with a B.S. in Russian Language and History; and MiraCosta College; where he obtained a college certificate in Landscape Design and Horticulture.

Mr. Burke retired from the military as a major after serving for a total of 27 years in the U. S. Air Force (as a Russian Linguist), in the U.S. Army Reserve and in the U.S. Air National Guard. After retiring, he continued to serve his fellow veterans by his various roles and activities in VFW Post 1513. He helped organize North San Diego County Homeless Veterans Stand Down, California State Military Reserve, was involved with Soldiers Heart, ACVOW, SDVC, and in the Youth Civil Air Patrol.

As stated above, Mr. Burke touched many lives since he was also active in various church ministries at St. Mary Catholic Church, such as teaching RCIA and Baptism classes, as well as leading the “Lord, Teach Me to Pray” series. He was a member of the Knights of Columbus.

He served as a volunteer for St. Vincent de Paul Thrift Store, St. Dismas Guild, a prison ministry, and Interfaith Community Services, touching people of a variety of needs. He taught classes in horticulture, was a docent at the Japanese Friendship Garden in Balboa Park and helped friends plan, layout and install new landscaping designs.

His love of music included playing guitar and trumpet, and as owner of Gary’s Paradise Record Shop, he was able to help other people to share his interest in jazz and Rock ‘n Roll from the 50’s, 60’s and 70’s.

He was also an avid reader. He was in the process of donating a large collection of Russian Language Books to Berkeley’s Moffit Library just prior to getting ill.

Funeral services will be held at St. Mary Catholic Parish at 130 E 13th Avenue, Escondido  on April 27, 2018 beginning with a Rosary at 9 am, followed by Mass at 10 am, with a graveside service at 12 noon at Oak Hill Memorial Park at 2640 Glenridge Rd., Escondido, CA 92027, with a reception following. Please help us celebrate Michael’s life and friendship at that day and time.