Part I of 2 parts

The first part of this article, about the current water situation in the state, will run this week. Part II will talk about the Metropolitan Water District’s general manager, Jeffrey Kightlinger, defending his agency from accusations made by one of its member agencies, the San Diego County Water Authority.

Although this article was written for our sister publication, the Valley Roadrunner, we felt that the regional issues are of enough pertinence to Escondido to reprint the article in this publication. 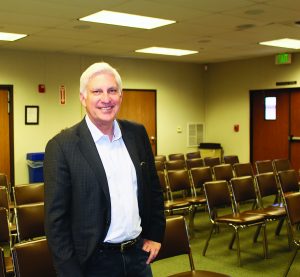 Monday the general manager of the largest water district in the state, possibly in the country, maybe the world, came to the little Valley Center Municipal Water District board room to defend his agency, the Metropolitan Water District of Southern California, from the ankle biting attacks of the much smaller San Diego County Water Authority.

He also came to update Valley Center about the state of water supply in the Golden State.

Representatives of the two agencies have been team tagging each other at board rooms around San Diego County for several weeks. Two weeks ago, the general manager of the Authority, Maureen Stapleton, spoke before the VC water board, laying out a laundry list of accusations of financial malpractice if not actual malfeasance.

Monday the GM for the Met, Jeffrey Kightlinger, limped into the VCMWD boardroom (he’s recovering from the broken leg he suffered when he ventured onto the slopes of the Sierras to enjoy the first true skiing in several years, frolicking on freshly dropped snow that saved the state from a deadly drought—now there’s irony) to defend the reputation, if not the honor, of the Metropolitan.

He was followed at the rostrum by Dennis Cushman, assistant general manager, of the Authority, who pretty much pooh-poohed everything Kightlinger had said.

It wasn’t the counterpoint-counter skit of Saturday Night Live where Dan Akroyd would declare “Jane, you ignorant . . .” It was far too civilized for that.

But the points being debated are not the stuff of comedy. The battle is solemn. It’s dead serious, and millions, if not billions of dollars are at stake. Perhaps even more than that is at stake: the Southern California lifestyle, that depends on the ready available of water, even if the supply is sometimes curtailed drastically.

During his talk, Kightlinger noted that he had last visited the VCMWD board about ten years ago, which was when he first became Met general manager. 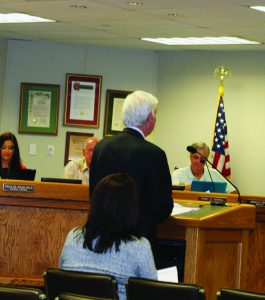 Jeffrey Kightlinger speaks to the VC Municipal Water District board.

Although he noted that  SDCWA is “mischaracterizing certain investments and other governance decisions by Metropolitan’s Board of Directors as ‘financially reckless behavior’ he said “these allegations are not supported by the facts.”

He alluded to the lawsuit between SDCWA, which is suing the Met for how much it charges to move water that San Diego buys from the Imperial Valley to San Diego, without any details, except to note that both agencies are waiting for a decision from an appeals court as to whether San Diego wins its point, and about a quarter of a billion dollars in judgment money.

“We have a complex system here in Southern California and by and large it works pretty well,

he said, adding that the system serves 26 agencies. Formed in 1928 it serves one in two Californians, one in 16 Americans, a total of 19 million people. “It’s working,” he said.

He said his purpose was not to engage in a “point counterpoint” with the Authority, but to update the VC board on the “big changes” that have happened to water delivery. He did get to the “counterpoint” later in his presentation, but we will cover that next week.

Because of storage facilities the Met has built  over the years, it will be able to “bank” up to 1.3 million acre feet, more than even in 2011, which was the previous record year for rainfall.

About 400,000 AF will be stored in Lake Mead. “There are a lot of complex pieces moving around [to find places to store the water], but it’s a good problem to have,” he said. They hope to get close to a record storage of about 2.2 million AF, “which we usually don’t get due to federal policy,” that forces a lot of excess water to be released into the rivers to flow into the ocean, to benefit fresh water fish.

They know California is less likely to have this kind of storage in the future, “due to climate change, environmental regulations and population growth,” he said. Climate change, he said, makes it more likely to get warmer rains instead of large snow packs. Those rains will likely come in bursts of  two or three weeks that must be collected quickly, or lost. About 70% of the water that ends up in the Bay Delta—before emptying into the Pacific Ocean—comes in a spasm of about 14 days of torrential downpours.

“To keep a reliable supply requires, reinvestment,” which includes shoring up the Colorado River supply and trying to do the same at the state level. In the future, we are likely to see more volatility in water supply with bigger storms, he said. “We will need to ‘gulp’ excess water when it’s available,” two or three times a decade.

Starting with Governor Arnold Schwarzenegger ten years ago, followed by Governor Jerry Brown, the state has been trying to come up with a way to bring more water down from Northern California. This “conveyance,” and how to achieve it, has been debated in the Golden State since the 1930s.

In 1980 the “Peripheral Canal” that would have done this was voted down handily by the voters. Later Governor George Deukmejian proposed “Duke’s Ditch” which met a similar fate.

“Now we are doing our fifth run at this, and Brown’s second run at it [Brown was first the state’s youngest governor in the 1970s.”]

This “conveyance” is being worked out now in the legislature and the U.S. Secretary of the Interior and is called the “Delta Bypass.” It involves two 38-foot diameter tunnels, each 45 miles long. If it is approved, Kightlinger, said, it would open the way to more storage projects, which would become more viable. “This would be a seventy-five-year fix to the water system,” he said.