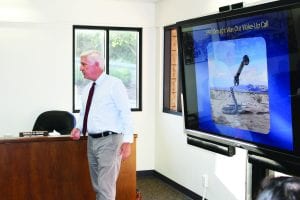 The Rincon del Diablo Municipal Water District Wednesday hosted Jeff Kightlinger the general manager of the Metropolitan Water District of Southern California, an entity almost big enough to be a country in its own right, but whose boss is not above making presentations to the member agencies of the large supplier of much of the water we drink.

In San Diego County, which has worked strenuously over the years to develop its own supply network, the water the Met sells doesn’t make up the lion’s share, but it’s still a vital share.

The Met consists of 26 member agencies, of which Rincon del Diablo is one. It includes cities and public water agencies, that serve 19 million people in six counties.

Kightlinger reminded the board how vast the MWD (aka “The Met) actually is, at least in terms of population. “It is one twentieth the size of the state of California and yet one in two people in the state are supplied water by it,” he said.

The Met supplies one of fifteen of every Americans. “If we were a country we would have the 11th largest economy in the world,” he said.

The largest percentage of water comes from local supplies of groundwater (45%) with the Colorado River supplying 25% and 30% from the State Water Project, which brings water from Northern California.

Because of this diversity of supply, “we don’t have severe impacts unlike Northern California,” he said.

In 1990 the region absorbed a near haymaker— a drought that severely restricted water, especially to growers. They were only saved by what many hailed as the “Miracle March” rains.

“That drought was our wake-up call,” said Kightlinger. “Our diversity [of supply] wasn’t enough.” To guarantee a reliable supply of water, the only way was to grow our supply while reducing our demand while increasing storage.”

The program adopted in the 1990s to accomplish that goal is about halfway completed, he said. That long-term project included the building of the Diamond Valley Lake in Riverside County.

This year’s incredible wet season provided special (and mainly welcome) challenges for the Met. The district was required to do a lot of moving around of water to make room for new, temporarily plentiful supplies. “We have moved more water and put more into storage, all while re-plumbing the system on the fly than at any time in our history,” Kightlinger said.

The Met as a whole can now “bank” 5 million acre feet using a combination of reservoirs and ground water storage, with ground water storage being the largest component. Before last year’s rains began that supply had fallen drastically. “When we get to one million AF we put on the brakes,” he said. “We got a little back into the system in 2016 and from this year we’ve added another 1.3 million AF, which is the most we have ever put into storage.”

Due to increased state and federal regulations aimed at preserving endangered species, the Met is being forced to find new more efficient ways to transport water just to stay in the same place. The average of 4.7 million acre feet delivered to the south will be pushed down to 3.5 million AF, said Kightlinger.

As noted above, about 30% of the water consumed in Southern California comes from the northern part of the state via the Sacramento-San Joaquin Delta. State and federal agencies want to modernize the water system by building three new intakes in the Northern Delta and two tunnels to carry water to the existing aqueduct system that delivers to Southern California.

They would allow the amount of water carried south to be between 4.7 -5.3 million and the 1 million AF expected to be lost to “bio-restrictions” would be restored.

This series of improvements has been dubbed the “California water fix.”

The three new intakes would yield an average of nearly 5 million AF.

According to Kightlinger there are five reasons for building it.

1) The new tunnels could carry water to the south in the event of damage from a large earthquake.

5) Water from the Sierra snow packs is the purest water, so pure it can be recycled many times. The more of it that can be transported south, the better.

Moreover, said Kightlinger, two-thirds of all water used in Southern California falls in about 30 days, and usually from three large water “events.”

Predictions of climate change forecast that as temperatures rise, we will get much the same amount of water, but it will fall as rain. It will need to be captured and stored within a short time, instead of relying on it to slowly trickle down as snow packs melt.

The board of the Met will be voting in September whether to go all in on that project.