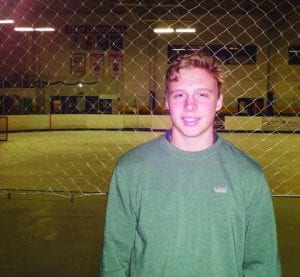 Youngster Brad Larson is stepping up in a big way as an assistant captain and key performer for the San Diego Sabers. Photo by Jim Tal Evans

Writer’s Note – This is the first in what the T-A hopes will be periodic profiles of members of the San Diego Sabers, a Tier II Junior hockey team based in Escondido that plays in the Western States Hockey League.
Don’t be fooled when you first meet and interact with youngster Brad Larson.
At 5-foot-8 and a tight 155 pounds, his size hardly overwhelms you. His face is not only pleasant and welcoming but it tends towards the angelic. Moreover, there’s not a mark on it.
Meanwhile, Larson’s personality is easygoing, casual and likeable, with a dash of understatement mixed in. It’s easy to feel comfortable around the 17-year-old Larson.
Based on his build, bearing and demeanor, if you had to guess what sport he excelled in, the pursuits of tennis and golf would immediately come to mind. On the surface, they’re the ones that seem to best reflect his persona of civility.
But man, in the case of Larson, are looks ever deceiving! No genteel sport for this talented athlete. Instead, Larson finds himself a full-fledged member of the San Diego Sabers, a Tier II Junior team participating in one of the most rugged sports around, ice hockey.
Larson’s interest in hockey was sparked by, of all things, a movie entitled “Most Valuable Primate” that he saw when he was just a bit of a lad. His interest and fascination with the game continued to grow as he made his way through the mite, squirt, pee wee, bantam and midget levels.
As for his life outside of hockey, it has included stops in places like Tucson, Torrey Pines, Shanghai China (where his father worked for Qualcomm) and his current residence in Rancho Bernardo, where he also attends RB High School.
On the ice, Larson carries himself with a maturity and presence that belies the fact that he’s the fourth youngest member of the squad that has players ranging in age all the way up to 20. Testimony to the high regard that both his coaches and teammates hold for him is reflected by the fact that he was chosen as one of the club’s two assistant captains, a real honor in hockey circles. “I was surprised when I was named,” admits Larson, “but it just made me want to take on the responsibility, work that much harder and prove to my teammates that I could do the job.”
Primarily a defenseman heretofore in his career, Larson has made the transition to another position at the Junior level. Manning the left wing, an effective wrist shot is his primary weapon of choice but Larson is quick to point out that thus far this season most of his six goals have come as the result of rebounds or tapping in loose pucks from around the net.
One of Larson’s linemates who has been particularly influential in getting the youngster to upgrade his offensive game has been David Grindstaff, a smart and fast performer who’s particular strong on the puck. Winger Elisha Reece and center Riley Cryan are other experienced players who have played with Larson and helped cultivate his comfort level as a forward.
But because of his extensive defensive background, Larson will always pride himself on being conscientious on the backcheck and being solid with or without the puck. “I definitely want to get better in the offensive zone,” he begins, “and I want to be able to make the plays and learn the wing position. But I also want my mindset to be that of a very committed two-way player who can get it done at both ends of the ice.”
One of the more impressive aspects to Larson’s game is his willingness to take a hit, shake it off and keep right on ticking. Earlier this season when he making the rounds around the Western States Hockey League, teams zeroed in on Larson for some heavy checking in order to test his toughness and grit. He more than measured up to the challenge and began earning a reputation as someone who simply couldn’t be cowed. “I’m not scared to take a hit or deal with the physical punishment that goes along with the game,” Brad states flatly. “I’ve learned that size doesn’t matter if you know how to hang tough.”
Thus far, it hasn’t been the easiest of seasons for the Sabers as a team, having won just three times in 27 outings but that scenario hasn’t been altogether unexpected. With a new ownership group creating a whole different culture and with an exceedingly young roster, growing pains figured to be experienced. But the Sabers have been showing real signs of progress as of late. “We’re young but things are definitely improving and getting better as we move along,” says Larson. “Sure, there’s been some frustration with the losing but it’s a credit to the coaches and players that the guys have remained hungry and really look forward to each and every week of practice. There are some real positives around here.”
As for Larson, he will diligently continue to hone his game with particular emphasis on his passing and skating skills. Agile, aggressive in the corners and equipped with a high hockey IQ, Brad hopes to ultimately use his time with the Sabers as a springboard to a opportunity at the collegiate level, be it Division I or somewhere else. “I’ll be happy to go to any school that might want me,” Larson says.
Based on the enviable skills that he’s already demonstrated, it would be a shock if some school doesn’t come calling in the very near future.