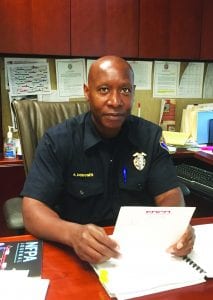 Alphonso Dobynes (he prefers “Al”) performed a variety of jobs for the city before landing at his current post of Escondido Fire Marshal, a position he assumed on March 26.

A fire marshal’s job may not be as sexy and exciting, in a “Bay Watch” sort of way, as a courageous firefighter dashing into a burning building to rescue a stranded puppy—but the job is just as important to the health and safety of Escondido’s residents who rely on the city to ensure the houses they live in have up to code fire sprinklers and new developments are as  safe as they can be.

Before he became fire marshal  Dobynes was a  Fire Prevention Specialist II, having started in Escondido’s Fire Dept. in 2007.

Dobynes came to California from his home town of Chicago by way of the U.S. Marine Corps. From there he joined the San Diego Police Department, where he served from 1986-2001. In January 2002, he joined the city of Escondido as a business license supervisor, a position he held until 2007, when he joined the fire department, working on the business services end until March, when he was promoted to oversee it.

As fire marshal, Dobynes interacts with business owners, and especially developers, who must meet a host of fire department requirements in areas such as sprinklers, locations of fire hydrants and required.

This roundabout way of getting to the fire marshal’s job meant that Dobynes is very familiar with the requirements of both the city and the department. “So, when I talk to a business owner who says, ‘Oh, I don’t need to have a license,’ I know better,” he said.

He has a staff of three full time officers, including Sandy Bauer, Jake Worthy and Lavona Koretke; and three part-time officers, include Tyler Sheldon, whom the department shares with the Rincon del Diablo Municipal Water Districts,—and whose main job is maintaining fire hydrants—Tyler Hay, and Chris Vaccaro, both part-time volunteers.

Bauer is the weed abatement officer. Each year the department sends out mass mailings to property owners in the city of Escondido and the Rincon Del Diablo Municipal Water District who live in zones at high risk to wildfires; informing them of their responsibility to perform weed abatement.

“It’s been very busy this season,” says Dobynes, due to the bumper crop of weeds that cropped after the wettest year on record in San Diego County. The city has already spent the $35,000 that was budgeted this year for weed abatement on such locations as Hubbard Hill, where the city has a repeater. “Everything that is dry and things that we thought would never grow have grown and grown some more,” said Dobynes.

Bauer also investigates complaints from property owners about neighbors who may need to cut back weeds.

Dobynes also goes out in the field occasionally, to meet with contractors and developers at construction sites. “Although developers do submit plans ahead of time, sometimes plans change in the field,” he said.

The department is responsible for doing annual inspections for a number of types of facility:

• Permitted assemblies, such as churches, clubs, such as the Elks Club, and restaurants that seat more than 50 people

The department also does burn permits (including pre-inspection of burn permits) blast inspections, standing by to make sure the explosions are safe, hazardous chemical inspections, doing special events, such as the street fairs and Cruisin’ Grand (on Nitro Nite!) renaissance faires, fires at blacksmithing demos, etc.

Just because a business location gets an inspection and checklist from the city, doesn’t mean it won’t get a visit from Cal-Osha or the County. The rules for these agencies don’t coincide exactly, although “We try not to give mixed signals when we are doing inspections,” says Dobynes.

Other duties of the Fire Marshal include explaining and educating the public about possible fire hazards and speaking to groups such as home owner associations. He also does career days and job shadowing programs, where young people learn what it’s like to be a fire marshal.

When firefighters visit a school, and interact with kids to teach safety lessons, that’s likely an engine company, rather than someone from the fire marshal’s office. Kids are far more likely to be fascinated by and listen to a firefighter who brings along a red shiny engine.

Dobynes is a youthful looking 54, whose three boys are all grown, or nearly there and who lives in Murrieta with Bernadette, his wife of 35 years. In 2011 he began running, something he had done in the Marines and at the police academy, but had let fall by the wayside for a while.

“One morning I just woke up my wife and said, ‘I’m going to run a marathon,’ ” he recalls. She looked at him skeptically, but he kept his promise to himself, and recently he participated in his ninth Rock N Roll Marathon.

Beginning June 26, the department will begin distributing smoke and carbon dioxide detectors to about 200 mobile homes in Escondido. This program came about after a child died earlier this year in a mobile home fire—a death  that might have been prevented if the mobile home had had a working alarm.

“That’s something we never want to see again,” he said. “We have an opportunity to make something good from something bad. We want to minimize the loss of life at every turn.”