McClure has his own ‘Day’ for years of running Safari Park 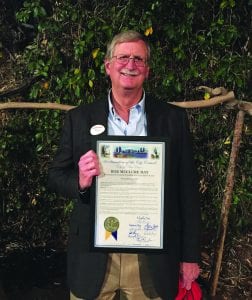 Escondido’s Bob McClure had his own day on November 5 when he was honored by the San Diego City Council. “Bob McClure Day” was held to commemorate his retirement in a few months after 35 years as director of the San Diego Zoo Safari Park.

As director, McClure has been responsible for the overall operation of the 1,800-acre wildlife preserve located in the San Pasqual Valley area of San Diego.

McClure was praised for helping “the Safari Park become one of the premiere destinations in San Diego County, attracting more than 1.5 million guests annually, and care for more than 3,000 individual animals representing more than 500 species, many of whom are endangered.”

The framed declaration praised McClure for helping to “pave the way for the Wild Heroes Program, being the first to offer his support when the Safari Park hosted a Wounded Warrior or veterans event.

In the 1980s McClure led the way to create a recycling program at the park, because he thought it was the right thing to do—despite the fact it cost extra money.”

McClure encouraged the Safari Park to work closely with the community, “working as a collaborative partner to save habitat and inform public development.”

During the Cedar and Witch Creek Fires of ten years ago, McClure stayed at the Safari Park to help evacuate mammals and birds and put out flying embers.

In his upcoming retirement, in about four months, he plans to hike, camp, do woodworking, eat pistachio ice cream and spend time with his wife, two grown children and no-so-wild dog and cat. One of his favorite sayings is “Here today. Gone to Mammoth!”