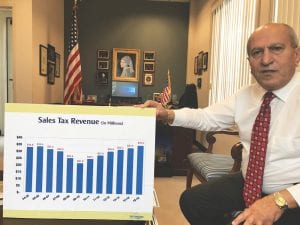 Part of a series. The Times-Advocate plans to interview all candidates for mayor and council. We invite candidates to contact us to set up an interview.

It’s February and with the mayor’s election in November, Sam Abed—who calls himself “the peoples’ mayor”—is preparing to do what he has done twice before: Walk through every neighborhood in the city and meet as many of his constituents as possible.

“I’m so excited and so hopeful about the city,” exclaims the mayor. “I’m running on my record. You can’t run against Sam without an agenda!” He is seeking a third term. He has been mayor since 2010 and on the city council since 2004. “We have a great success story to sell. I am the most engaged mayor ever. I am preparing to walk through the city for the third time.” You will find the mayor wearing out shoe leather on Saturdays. He emphasizes that he doesn’t wait until the campaign season to engage with residents. “It’s a seven day a week job. I’m the most engaged mayor because I love this city!”

He brags that he has already raised $75,000 in the first 60 days of the campaign, from November-December. “I have big checks and I have little checks.”

“I’m very proud of our record. The voters realize the city is doing great. We have a good working city council. Our roads are better. The city is cleaner and safer. We are enjoying the most economic activity in North County. Only San Diego City enjoys more growth, and they are much larger than Escondido,” he says.

He says his opponent, Paul McNamara, “is a nice guy; but politically he has aligned with Olga Diaz [the council member who ran against Abed for mayor in 2014] one hundred percent. Maybe that’s because he couldn’t run against us on a pro-growth campaign. He is running on the same platform that Olga did four years ago, and the city is in even better shape. That is why I have no doubt we are going to keep the council majority. You need experienced people right now.”

He points to his website (www.mayorsameabed.com) that has many endorsements (“I have hundreds endorsing my campaign”) and throws in another little dig. “I’m surprised to see no endorsements for McNamara.”

Mayor Abed is not shy about being a booster for Escondido. During his many public appearances, he often exclaims, “Is this is a great city or what?” and, less frequently, but just as emphatically, calls Escondido, “the greatest city in America.”

He says, “I’m a proud immigrant from Lebanon. I came here for the American dream. I couldn’t ask more than to be the mayor to proclaim those values.”

Obviously irritated by comments from his opponent that he doesn’t listen to his constituents, he says, “If you want to be a public servant you have to connect with the residents.” He visits “all of the city’s neighborhoods, and attends almost all community events.”

A major theme of his reelection efforts is the city’s rise in economic activity since he became mayor. “You can’t be a bedroom community. I believe in assisting our vibrant business center,” he says.

On his watch 560 new businesses have relocated or opened in the city. A total of 35 major developments that add up to about $1.2 billion in economic activity are also in the pipeline or were completed during his tenure. One building right now is Latitude 2 along Centre City Parkway, a sister development to Latitude 33. The Westfield Mall is adding $100 million in investments, including a new cinema, 24-Hour Fitness, the Cheesecake Factory and California Pizza Kitchen. The Marriott Hotel’s Spring Hill Suites is also in the works.

The city attracted Stone Brewing—a $300 million plus business—to locate in the city.

Stone and the nearby Safari Park (not in the city limits but considered by many an Escondido location) are the second and third most visited tourist destinations, he says. “We have also attracted three hotels.”

Asked to name his favorite features of the city, the mayor said, “We have a great downtown, with almost fifty restaurants. We are trying to make downtown the focal point of our community. I also love Daley Ranch and Westfield Plaza.”

Asked what he considers the main issues of the election, Abed said, “I don’t’ see any major issues. I think people are happy with the way things are.”

People ARE concerned about the homeless issue, Abed says, “We are dealing more aggressively and compassionately with the homeless. It’s our biggest challenge. We have ten percent more homeless than we would have because of state mandates.”

The “state mandates” he refers to are AB 109 and Propositions 47 and 57, which, taken together, have put more criminals into the general population by the forced release of inmates from state prisons due to overcrowding—and by reclassifying some felonies as misdemeanors, so that miscreants aren’t imprisoned to begin with.

“People are getting away with crimes they didn’t used to get away with,” says Abed. “Hundreds of thousands have been released into California. That’s why the sharp increase of the homeless into our city.”

Nevertheless, crime has declined dramatically, an estimated 33% since he became mayor. “Escondido is as safe as it was in 1980,” due to the city’s emphasis on law enforcement.

One of the mayor’s proudest boasts is “our city is one of the few cities with a balanced budget for six years in a row. It’s not only balanced, it will end 2098 with a two-million-dollar surplus. We turned a sixteen-million-dollar deficit to a ten million dollar surplus without using reserves or raising taxes.” During that same period the city earned an AA- bond rating.

Answering criticism that the city shouldn’t maintain a $17 million reserve, Abed retorts that is needed to maintain cash flow as money flows in and out of the general fund.

For several years now Abed has warned that soon the city will have to make up $40 million that will be added to its CalPERS pension obligations. The obligations will grow from $19.2 million currently to $36.8 million in four years. That’s hard to accept when the normal return on the city’s investments is at best 5%.

“When it reaches thirty-eight million that will be thirty-eight percent of our general fund,” he says. “We will be left with just enough for fire and police.”  To try to prevent that day from coming, the city has asked all of its employees to pay their own 8% contributions to PERS. For several years the city paid both its share and the employees’ share. New employees are being asked to pay their own contributions, and the city is lowering its percentage from 3% to 2%.

BUT, that does nothing to the address the 800 employees on the old plan and 900 retirees that it is paying now. “We can’t change that,” says the mayor. “We have lowered the pension to the lowest levels allowed. The only way we could change that is through a ballot measure as the City of San Diego has done, or by bankruptcy for the city.”

He places this directly at the foot of the government in Sacramento, which oversees CalPERS. “The state is the most progressive, liberal, emotional government we have ever seen in the thirty-two years I have been here. They are ignoring their base. All they care about are the illegals and most are against what they are doing.”

One glimmer of light in this gloomy projection is the fact that the state’s redevelopment agency owes the city $27.5 million it has been trying to collect for years since the city loaned the money to the fund in the days when the Center for the Arts was being built.

When that money is paid, the city plans to use it to pay down the pension obligation as much as possible. “We hope to reduce the annual obligation by about $2 million each year,” he says.

The mayor has been highly criticized for the number of times the city has been sued. He thinks that’s an unfair criticism.

Regarding the lawsuit from ECCHO (Escondido Country Club Home Owners) Abed originally voted against the development proposed by New Urban West Inc. (NUWI) for Michael Schlesinger. In November the city approved the development, and then, a few weeks ago it filed criminal charges against Schlesinger for neglect of the property.

I asked Abed if, in light of the charges against the owner, he felt vindicated for voting against the project. “I believe in the democratic process,” he said. “This is behind us, although I thought it was a fairness issue. I believe the current city density was determined based on that 120 acres being open space—mitigation for it. The good news is we are moving forward to end that bad situation. But right now, there is a lawsuit by the residents that is not going to help.”

Regarding the lawsuit by opponents of the city outsourcing the public library, Abed dismissed it. “It does not have any merits. It’s hurting the library. Not helping.” He said that not only will the city save the $400,000 a year in reduced costs from city employees switching to employees of the contractor, Library Systems and Services. It will also save enough in pensions to make the total savings each year $1 million

2 responses to “Mayor Sam Abed: “I’m running on my record””