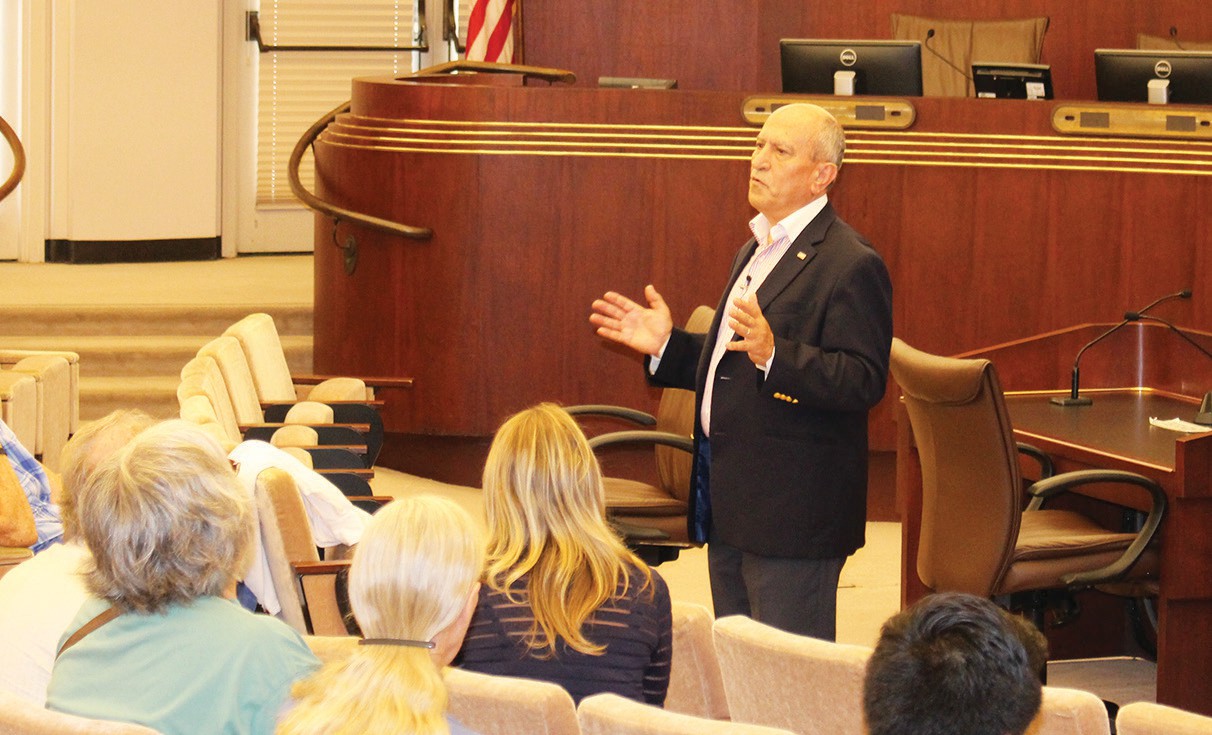 The mayor answered questions about improvements to city streets, protecting the city’s trees from ravishment by city employees, climate change, and the siting of a controversial desalination plant.

These meetings provide a way for the mayor and city staff to interact with the community in an informal way, where anyone can attend and ask questions, unless a city council meeting which is structured. The purpose is not to make policy, but to hear from the people.

Knowing that he was in a roomful of people likely to agree: Abed declared, “This is the best city in America — you agree?”

Following an eight-minute video that touted the city’s many attractions, Mayor Abed spokes about some of his aspirations for the city.

He said he would like to address the issue of the homeless, which is becoming a major problem here. “We are dealing with a homeless population that has almost doubled,” he said. But he also riffed on one of his favorite themes, that of the rising costs of buying a home, caused, he said, by too much regulation, taxes and government debt, especially at the state and federal level.

He also criticized the state legislature for approving AB 109, which made it possible for more state prisoners to be loaded onto county jails and to become homeless, and the voters who two years ago passed Prop. 47, which made many felonies into misdemeanors and lowered the threshold for crimes — “That also sent thousands into our community. Can you imagine if you use drugs and you just get a ticket?”

He predicted that Prop. 64, which would completely decriminalize marijuana use, would wreak even more harm. “They are sending those problems to the local communities. That is why police chiefs all over oppose Prop. 64. We already have enough problems!”

But he also had good news. The five cities along Hwy 78 are cooperating to encourage economic growth in the North County. The city has welcomed 35 major new businesses and private projects valued at $18 million are going through the process — a process that will ultimately result in 1,800 new housing units in the city.

“We have welcomed 1,400 net new businesses since 2010, 427 in 2016,” he said, and praised Stone Brewery’s recent announcement that it would be building a boutique hotel in the city.

He noted that the city will have more that 1,700 events take place this year, with a net increase of $9.5% to the taxes the city collects, and said that 1% of all sales tax collected in Escondido returns to the city. That amount was $35.6 million in 2015-2016 and makes up 38% of the budget, by far the largest revenue source.

Since 2010 the city has had a balanced budget and gone from a $15.6 million deficit to an $8.2 million surplus. However, he said, the city faces heavy burdens from its participation in the state’s CalPers pension plan, which is running a $220 billion shortage statewide. He proposes that the city begin setting aside money on a regular basis to address this Sword of Damocles hanging over the city.

Saying that the city’s number one responsibility is public safety, the mayor praised the city’s Neighborhood Improvement Program. “We don’t want to be like Chicago and Los Angeles,” he said, describing how the program targets and different neighborhood each year, focusing on it in terms of more police presence and municipal improvements to sidewalks and roads, and fighting graffiti. He said both the police chief and city manager are fully on board in these efforts.

After his presentation the mayor field questions from the public.

One woman, who was critical of the city’s tree cutting efforts in the historic district, an action that has sparked some friction with residents of that area, proposed that the city adopted a “tree ordinance” “so we can protect these trees.”

“I don’t need any ordinance,” said Abed. “We are not going to take a tree that doesn’t pose a hazard.” But he added, “We will look into anything that will help us do our job. We are going to look at everything that will protect our historic district, including the trees. We are already empowering saving as many trees as we can, but we have to balance that with the cost.”

However, he conceded that the city fell down on the job in communicating its plans for tree removal with those residents. “Next time we are going to communicate better with you,” and indicated the city manager, Graham Mitchell, who nodded vigorously when he was pointed out.

Mitchell is a relatively new official at the city.

Another woman took the city to task for the conditions of medians along Valley Parkway. “It’s not a true parkway,” she said. “It’s a disgrace.” She compared the city unfavorably with San Marcos, which is planting trees and shrubs in its medians.

Abed said that residents would soon see an improvement along Valley Parkway. The trees died in those medians because the drought forced the city to cut back on watering them. However, it will soon begin diverting reclaimed water to the medians.

Other residents complained about a neighborhood where the sidewalks have been allowed to deteriorate. Abed thanked them for bringing this to his attention. “This is why we have these meetings. We are not perfect.”

Abed noted, “You can looked at the budget on our website and look to see where everything goes. Each year we have to come up with three million extra dollars to provide the same service that we do today.”

There was some discussion of a desalination plant that the city is looking at locating at the corner of Ash & Washington. Some residents of that neighborhood said they opposed having such a plant to look at. Chris McKinney, di­rector of utilities, explained that the city tries to build new facilities that blend into the neighborhood. He said the goal is to build a plant that resembles a residential or office building.

This project should come up before the planning commission sometime in December.