Mayor promises GOP club: “I’ll talk to anybody any time” 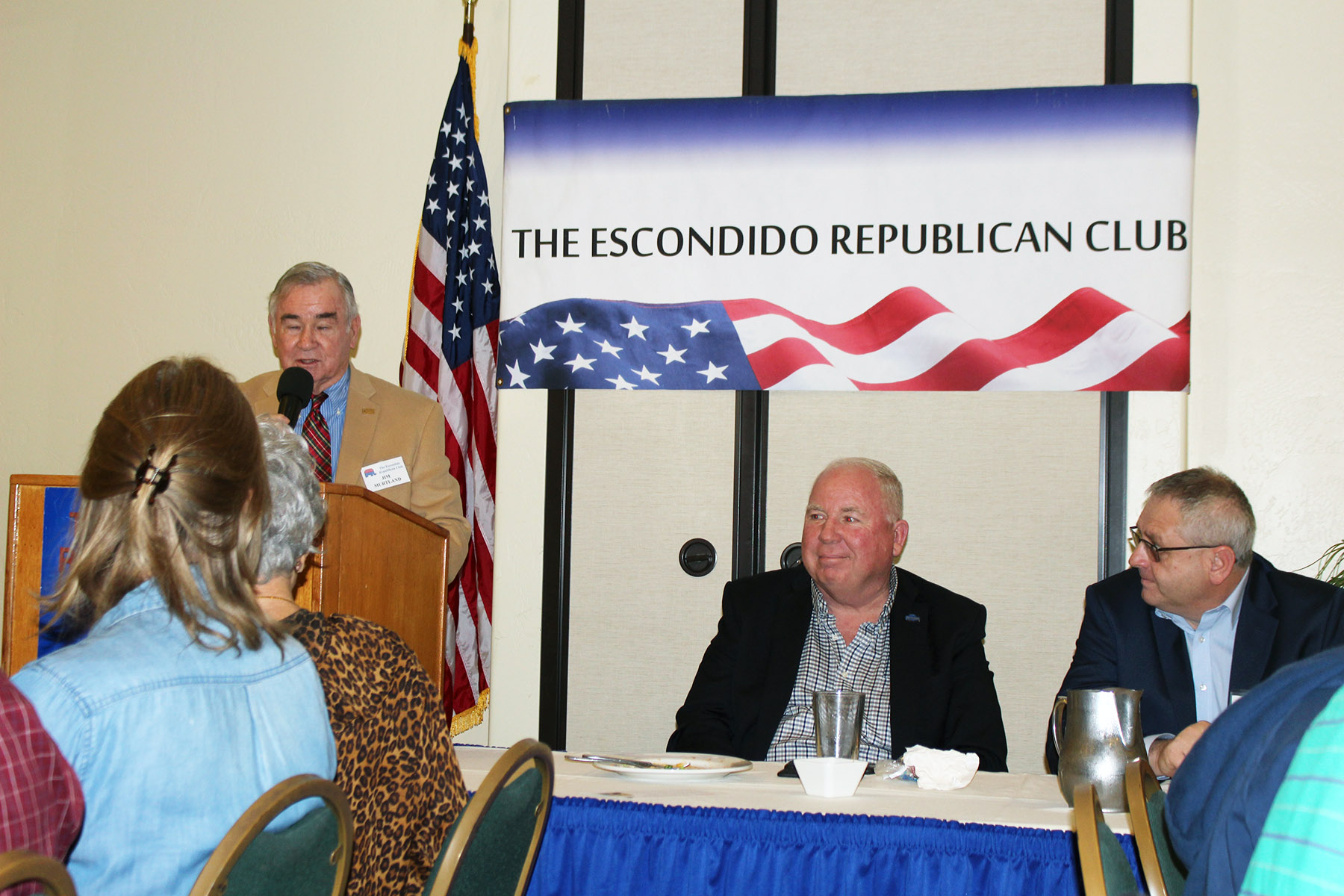 The mayor of Escondido, a Democrat, Monday came calling on the Republican Club of Escondido for lunch. Anyone who expected anything other than a polite, respectful reception came away disappointed.

“A wise man once said: ‘If you want to find a politician you agree with one hundred percent of the time, then run for office,’ ” said Paul “Mac” McNamara, who took that advice and carried it with him all the way to election day—when he was elected mayor.  He told the Republican lunch club that he wants to talk to people who agree with him—but also to get the input of people who don’t. “I want to talk with all of you to help us take the city to the next level,” he said.

He plans to have a monthly “Meet the Mayor” get-together that will be held in the mornings, noon and sometimes evenings at different parts of the city. “Just to talk to people about what we are doing right—or wrong,” he said.

Since election day he has heard a lot of good ideas and wants to hear even more, whether from supporters or critics.  He gave one example, “A little idea: a permanent indoor farmers market. But it’s a good one.”

He is putting together a 45-member mayor’s roundtable that will include business people, social justice warriors, developers, environmentalists, “all to talk about ‘How do we change the narrative of the city to make it more positive?’ ”

McNamara’s first and most important goal, he told TERC, “is to improve the business climate, so more people will want to come here.” That doesn’t mean he will neglect parks, schools, or the homeless. “The question I want to address is how we solve these problems?” he said.

He is looking for people who have a passion. “People who think we need more music, or more art, or who want to promote business or deal with the homeless problem, or turn Grand Avenue into a North County Gaslamp,” he said. The latter is something he especially supports.

Some people hit up the mayor to fix potholes when they meet him. Others, like a woman in her 80s, ask questions that momentarily flummoxes him. “She asked me, ‘What are you going to do about the tumbleweed problem?’ ” He had to confess, “I don’t recall seeing any, but now I’m on the lookout for tumbleweeds.”

Of course, he says, he always agrees it would be nice for the city to pay for certain things. “But the city can’t pay for everything. That’s why we need this discussion. How do we get the most money? By encouraging more business.”

Recently he met with a group of car dealers to ask for ideas on how to create a “black Friday buzz” to get people to buy in Escondido. “Why do people come to Escondido? Because there is something exciting going on,” says McNamara. “Alex MacLachlan [president of the Downtown Business Association] wants to put on a music festival. We are on the verge of a major demographic change. We have the most affordable housing in the County. We should be looking at our businesses to meet the needs of that younger demographic with children.”

Declaring that the mayor is a “non-partisan” office, he said, “I ask you to keep state issues in Sacramento and national issues in D.C. I don’t really care what your party is, I want to hear from you. I’m serious. You have my email. I’ll talk to anybody. If you want to talk to me, I’ll set up a time.”

He relayed a recent conversation he had with the CEO of Palomar Health, the second largest employer in the city, which, he asserted, hasn’t gotten much attention from the city in the past. Such as, for instance, encouraging businesses to locate here that would serve some of the needs of the hospital. “What other good businesses can we bring to Escondido?” he said.

“My kids grew up here in Escondido but they can’t find a job here,” he said.

Asked his position on medical marijuana facilities in the city, McNamara relayed how as he visited some of the many mobile home parks that, besides residents complaining about rents being too high he was told again and again, “I’m on Social Security and I can’t afford to drive to Vista to buy medicinal marijuana.”

McNamara said that when he was a Marine stationed at the U.S. Embassy in Mexico City that one of his missions was to encourage the Mexicans to fight drug smuggling across the border. McNamara recalls being told by a Mexican officer, “You want to end the drug war, then stop using the drugs.”

Whether to allow marijuana to be sold in Escondido, “is not my decision alone. Clearly there is a lobby for medical marijuana,” but a major problem is that marijuana is still a Level 1 federally controlled substance, despite changes in California law. However, he said, “I told people I would bring it back on the table and talk about it.”

He quipped that he told the people at the mobile home parks, “If you are going to buy marijuana, at least buy American.”

He said anyone who is interested in being involved in this discussion to get ahold of him. 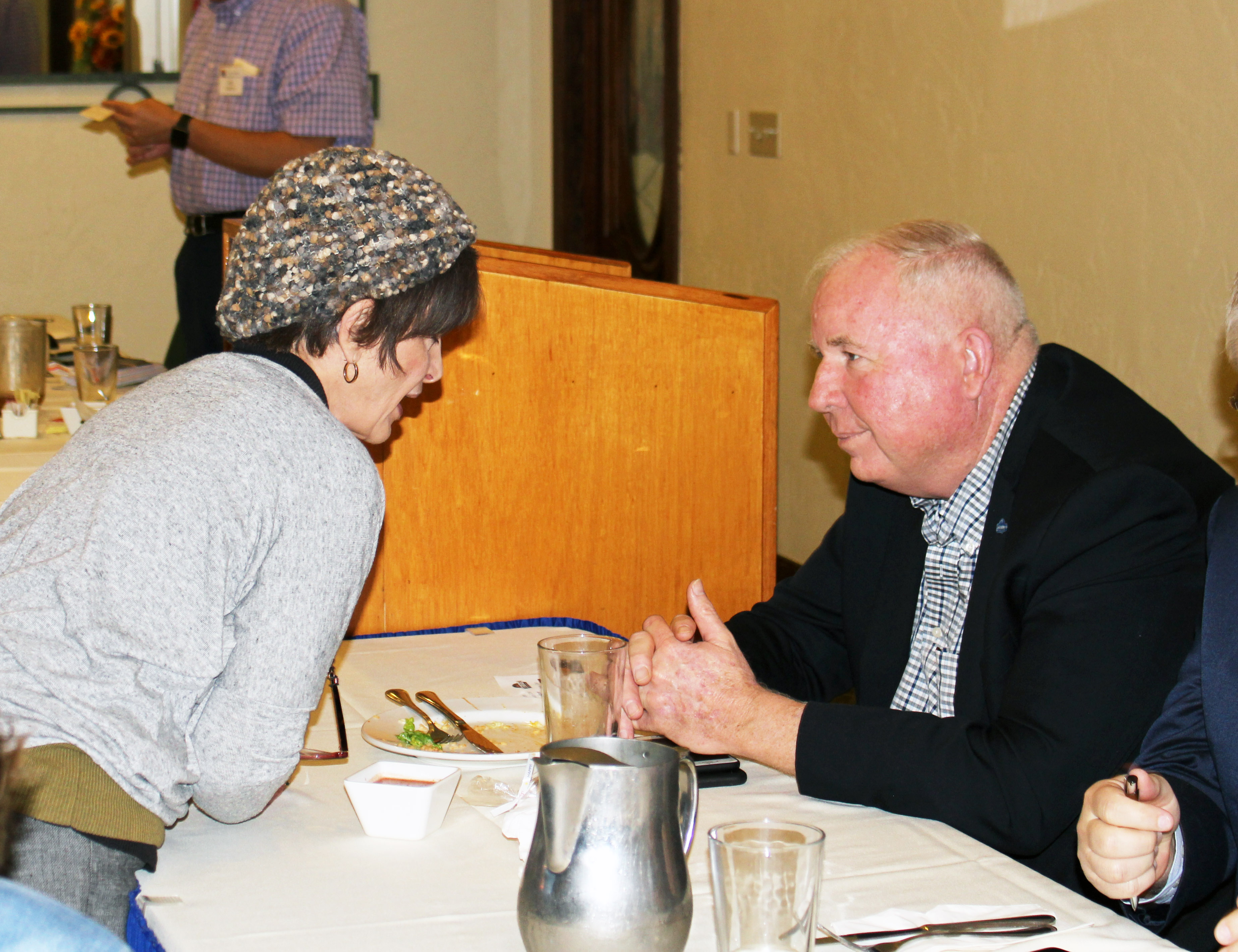 Mayor Paul McNamara chats after his speech before TERC.

Another question asked McNamara how he intended to address the many vacancies on Grand Avenue, and whether he ever considered a vacant land tax.

McNamara said he has talked to some developers who are considering developing some of those vacant parcels, although he is not yet allowed to talk specifics. He said that he was intrigued by the idea of a vacant lot tax. “I’m going to write that down!” he said.

He was asked about probably the most controversial subject of the November election, whether Escondido should be a “sanctuary” city.

“We are already a sanctuary state,” he said, “and I’m not going to break the law and your former mayor didn’t break the law.”

McNamara was asked to talk about his background, which included 28 years in the Marine Corps, including time as a pilot at Miramar. “I fell in love with Escondido and moved here twenty years ago,” he said. When he left the Marines, he started three companies and took them to several millions of dollars profits per year. He said he decided to run for mayor because, “I thought we could do better as a city.”

He fielded another question about the proposed condo on Parking Lot #1, which is the lot across the street from City Hall and behind Grand Avenue, behind Filippi’s Pizza Grotto.  No final decision has yet been made on this city-owned property, he said.

“We have to decide what’s the best use,” he said. “I haven’t committed to whatever the best use is.” He indicated former councilmember Ed Gallo, who was in the audience. “Ed has made a good point about parking. When we have a street fair people still find a place to park, it’s just not as convenient.” He added, “That goes back to what we want the city to be.”

The final question asked whether McNamara supports the development the city council approved for the old Country Club area. “I was opposed to that,” he said. “But I don’t think we have many options now. I don’t think we should have done that and I’d like to do something to mitigate it for those people who moved there with the understanding they would be looking at a golf course.”  He said he will be meeting with residents of the Country Club area soon.

At the end of the speech, the club’s president, Jim Murtland, said, “Thank you for coming into the lion’s den.”

After McNamara’s speech, in other business, Don Burgett, the aide to Congressman Duncan Hunter, noted that Hunter has introduced three bills that would increase transparency for veterans and their spouses. The bills are HR 181, 497 & 610.