Mayor pitches his message over coffee: ‘We didn’t have a revolution, we had an election’ 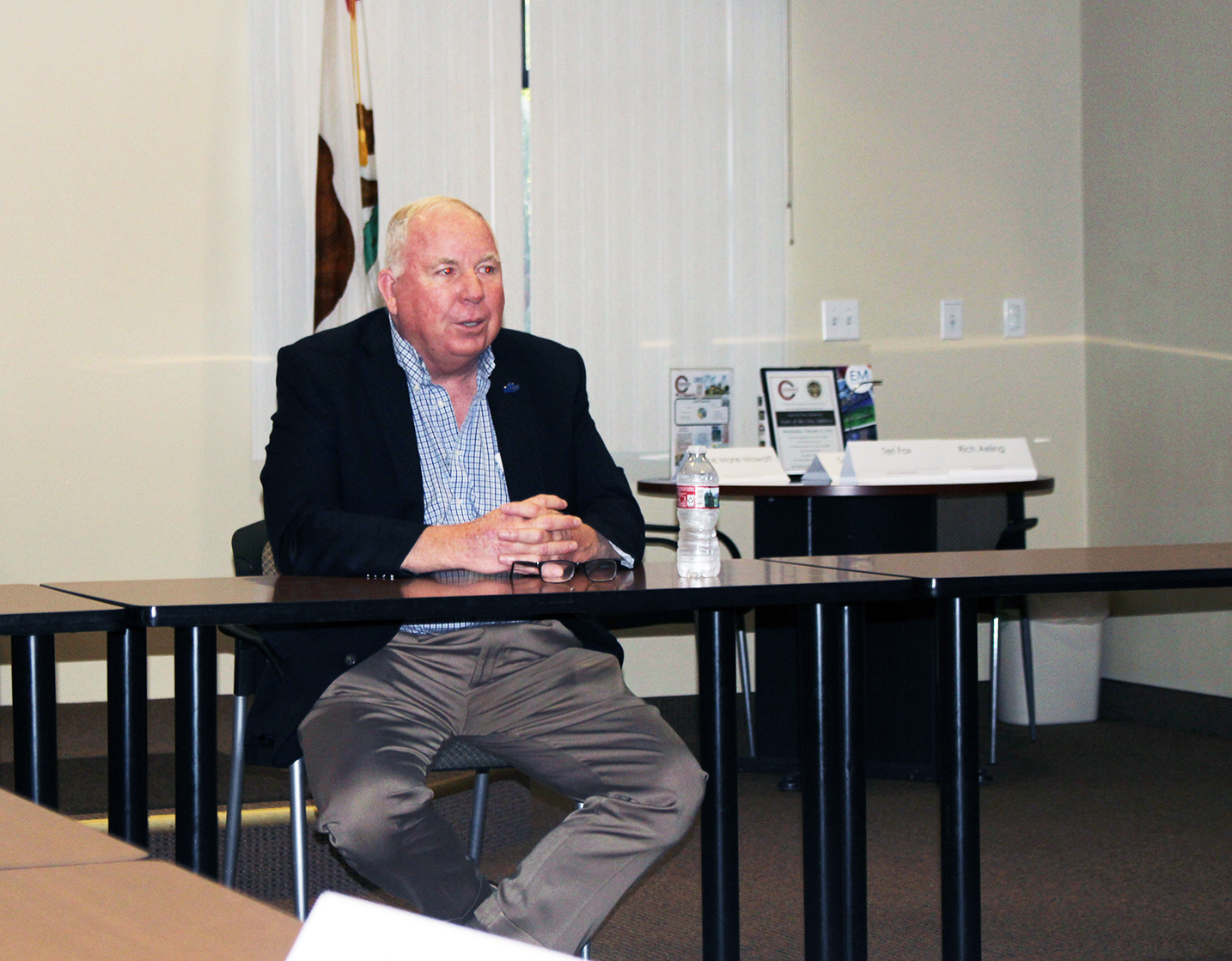 Mayor Paul McNamara talked about his vision for raising the city “to the next level,” and took questions.

Mayor Paul McNamara took his message of inclusion to one of the Chamber’s early morning roundtables called “Coffee with the Mayor” Tuesday, and it was a full table of movers and shakers from the Escondido business world—interested in listening and being listened to.

McNamara sat at the end of a long table. He said it reminded him of his days in the Marine Corps. If an officer was brought in to sit at the end of a table it was because he was in trouble. “I feel like a guy sitting at one of those tables,” he joked.

McNamara, who responded “call me Mac or Paul” when addressed as “Mayor” said he has heard a bunch of “wonderful” ideas from people when he asks them what the city government should do to move the city “to the next level.”

“For our city to rise you need to have a strong business community and be attentive to business. We need to ask ourselves what would bring a business here?” he said. “We need to invest in the city to make it attractive.” Things that will make Escondido more attractive are good schools, good public safety, affordable housing and a variety of quality of life issues, he said.

An example is the city of Coronado. Despite all of its natural attributes, such as a gorgeous bay with great weather, the city invested in a community swimming pool. “That’s a symbol of how a community is what it believes in,” said McNamara.

He spoke recently to a man who runs a church group, and who ran with the gangs as a youth. He said what prevents youths from joining gangs is when they are presented with something else they would rather be part of: a community. “Why doesn’t someone join a gang? Because they are in community sports. We don’t want to be known as the ‘City of Gangs,’ or Es-CON-dido as someone put it.”

He pointed out that when the city hosted an exhibition in 2018 the world tour of the Niki de Saint Phalle that Escondido was “one of four places in the world that had it. Yet it got no press. Nobody knew about it.”

The Times-Advocate points out that our paper gave extensive coverage to the Niki de Saint Phalle exhibit. We can’t help it that other media fell down on the job!

The mayor has gotten plenty of good feedback when he asks, “Who are we as a city?” Some people favor a center of art, others want music to be the focus. Others say the city needs to solve the homeless problem.

“I agree with all of them,” he said. “We don’t want to have all those people on the streets but we need to solve the problem in a compassionate way.”

He said he has been talking to Third District Supervisor Kristin Gaspar, whose district includes Escondido, about homelessness. “I’m of the opinion we need a stronger dialogue with the city and more partnerships within the community to solve this problem,” he said.

When people approach him and say the city should spend money on this project or that project, he always agrees. “But we don’t have the money for everything.” That’s where public private partnerships come in, he said. “That’s why we need a strong business community, to raise more money.”

McNamara repeated one of his favorite mantras: “I really don’t care about your politics. At the city level we can leave the state issues in Sacramento and the federal issues in Washington.”

He said he wants to preside over a city that “gives a you know what.”

The city has many bragging rights about things that could attract business. “We have the most affordable housing in North County.” But it could have even more to brag about.

“We could turn Escondido Creek into a San Antonio River Walk, using recycled water. What are we as a city? We aren’t Carlsbad. We are on the edge of agriculture and the edge of the Backcountry.  We don’t have a great reputation outside of the city limits, but we have a lot of great things. I feel we should capitalize on our agricultural roots. I don’t think we should try to bring in biotech. Agriculture is our strength.

“Farmers are never the bad guys in the movies. They are a good positive image for the city.”

The city’s Comprehensive Economic Development Strategy (CEDS) plan calls for things like developing vertical farming. “Escondido High School has three hundred kids who are in the FFA. That’s 300 kids with no place to go with those skills,” he said, saying Escondido should try to bring the UC San Diego extension here.

Escondido processes water for other cities, such as Rancho Bernardo, turning it into recycled water that can be used for farming. McNamara envisions adding another level of water treatment to produce potable (i.e. drinkable water.) “Water is a big deal in Southern California,” he said.  “We have the Hale Avenue Resource Recovery Facility (HARRF) multi-filtration plant where we will get water to the farmers. Using this water we could become self-sufficient. We could take everyone else’s effluent and process it.”

He wants to form a mayor’s blue ribbon committee to vet these ideas and come up with the best ones. “We are looking to see how we can get some synergy and more people involved,” he said. “Please apply! Don’t save your best ideas for the exit interview.”

Noting that the Grape Day Festival, “has been fading,” he said, “What if we moved Grape Day to early November and combine it with other celebrations? We could have a Harvest Festival, a day of gratitude.” 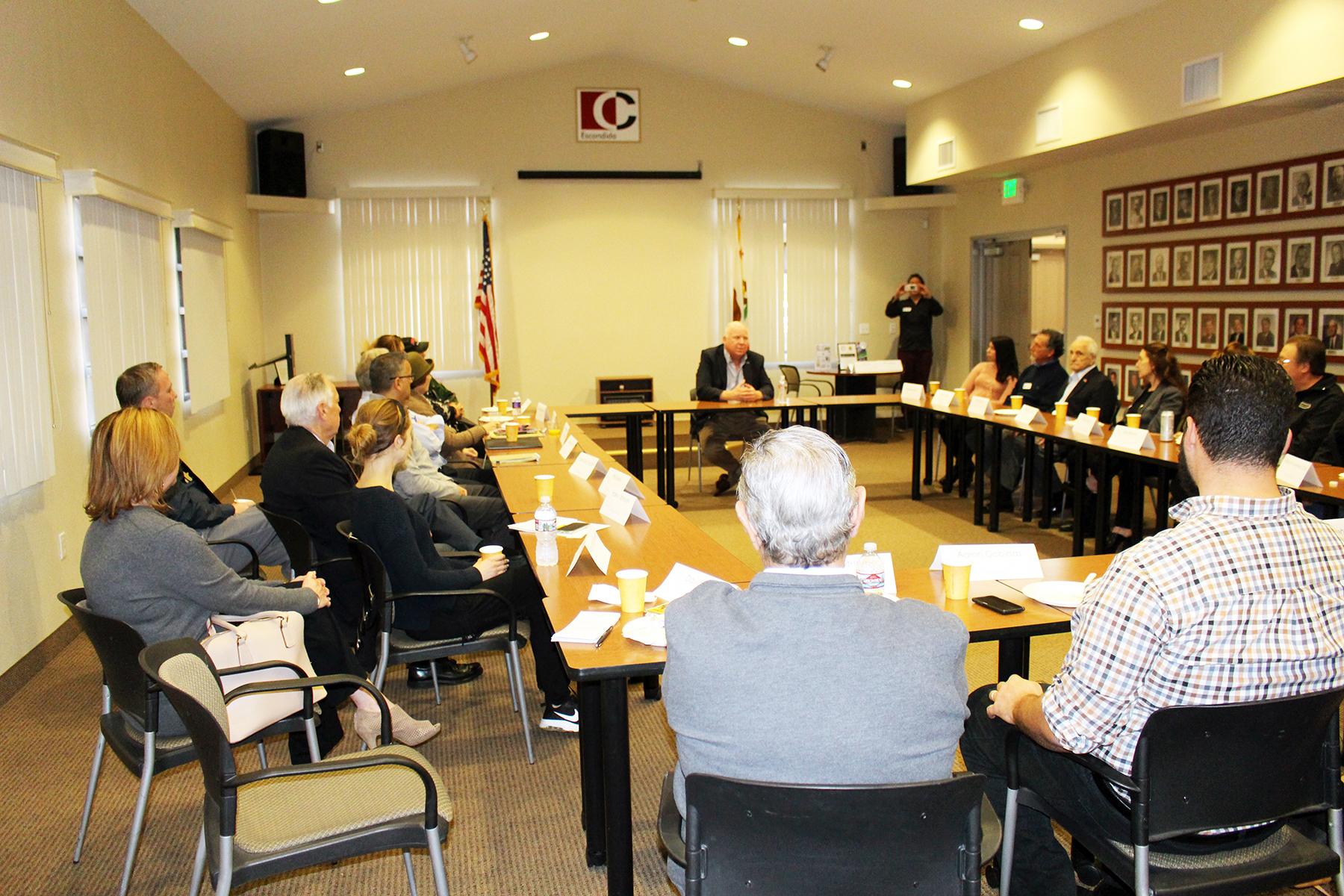 He shared another dream: “The downtown should be a North County version of the Gaslamp.” Noting efforts to enhance that district, such as the Escondido Charitable Foundation Arch (see front page story) he said, “We need development.” He talked about the former Palomar Hospital property that is slated for housing beginning next year. “But we want development with bells and whistles. The kind of development where people will look at it and say, ‘I wish we had of these in our city.” He added, “We are going to squeeze them a little bit.”

Rorie Johnston, CEO of the Escondido Chamber of Commerce said some cities have billboards that define them. “If we had a billboard, what would our billboard say?” she said. “The view from the freeway isn’t our most attractive feature. The city is going through an identity crisis.”

“It’s a great question,” said McNamara. “I like to think something like, ‘The gateway to eco-tourism.’ We are the transition for ag in North County. The continuation of the Crest Trail, a place where you can go to hike. I think we could build on that.”

McNamara said as mayor he has a big say in what committees the city will have and who serves on them. “I want to have a fresh start and have people on them with fresh ideas.” But he added, “We didn’t have a revolution. We had an election.”

A young business entrepreneur, Aaron Gobidas, worries about his employees finding affordable homes. “Not the projects, but not $400,000 either. I don’t know anyone under 35 who has bought a house. Everybody is forced to move to Fallbrook or Temecula,” he said.

And that creates the traffic everyone who opposes development says they oppose, pointed out the mayor.

Johnston added, “It takes ten years to turn a shovel on a project.” She said residents are inclined to vote no on all development projects, which further worsens the housing situation. “It’s a huge issue. It’s an impossible issue to put housing developments in the voters’ hands.”

“I agree,” said McNamara. “We are not anti-development. We need to get to yes, but we have a stewardship. We don’t have a lot of land left, so we need to squeeze the developers a little. We want these projects to be award-winning. At the end of the day,” he concluded. “This is our home.”

One response to “Mayor pitches his message over coffee: ‘We didn’t have a revolution, we had an election’”