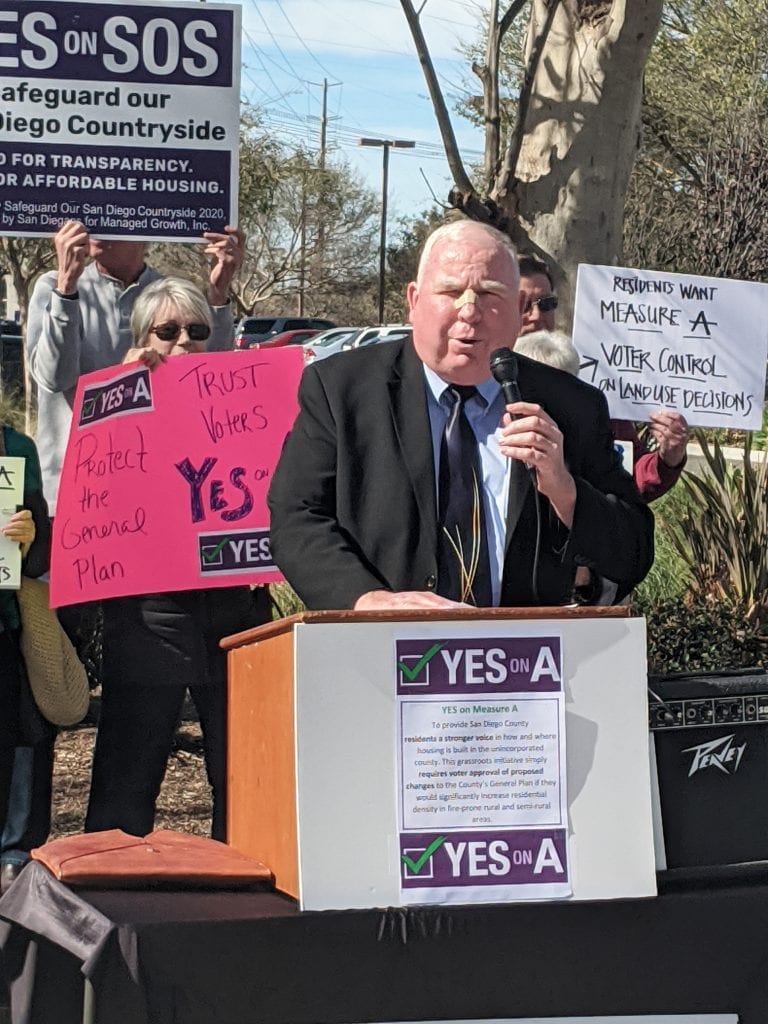 Escondido Mayor Paul McNamara Wednesday speaking to supporters of Measure A in the parking lot of the Escondido transit station.

At a press conference in Escondido, the two elected officials highlighted the benefits of voter involvement in approving General Plan Amendments and spoke about the history of Proposition S, an Escondido land use rule comparable to the countywide Measure A.

“In Escondido, the passage of Proposition S encouraged development where it was needed most,” said McNamara. “Prop S has not impeded economic development or housing development in Escondido, and there is every reason to believe that Measure A will similarly guide developers to build housing closer to jobs and infrastructure.”

Excerpts from the mayor’s speech are included below:

“I moved to Escondido while on active duty with the Marine Corps after serving at the U.S. Embassy in Mexico City as a DIA attaché over 22 years ago.  I completed my Marine Corps career as a colonel, serving as the Chief of Staff for all Marine Corps Forces on the West Coast which conducted operational planning for worldwide post 9/11 activities,” he said.

“After completion of service, I served in leadership roles in various companies eventually starting my own with operations in three states.  Leaving the for-profit world, I served on several non-profit boards and eventually served as the Executive Director of the MCRD Museum Foundation.  Prior to being elected Mayor, I served eight years as an elected Community College Trustee.  I chose to serve in local government because I want to be sure we are doing all we can to create a sustainable future,” said the mayor.

“Measure A is designed to produce better planning outcomes for the San Diego region. As a region, San Diego must achieve sustainability, so that future generations can continue to benefit from a healthy environment and strong economy.  Measure A is a vital part of this effort,” he said.

“We can and must plan for development and transportation in a way that reduces greenhouse gas emissions, addresses climate change, provides affordable housing, and protects nature.  This means embracing growth in cities, near job centers and transit, with homes that are affordable by design.  This is often called ‘smart growth,’” he said. 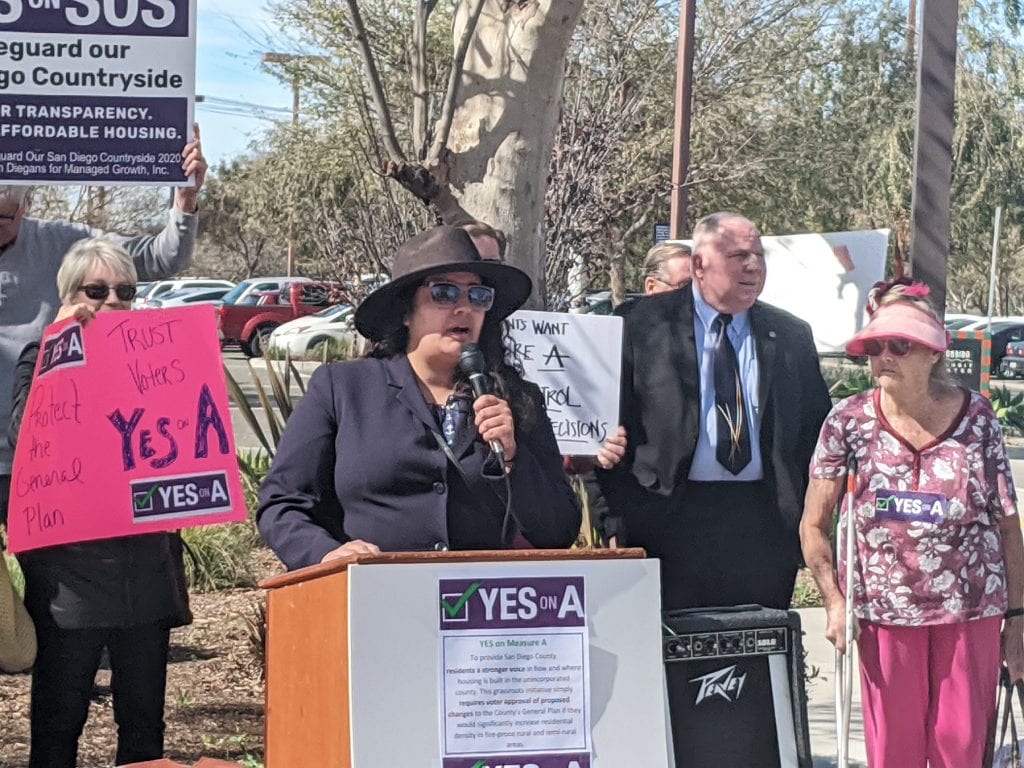 McNamara continued, “The good news is that the General Plan for land use in the unincorporated area outside the cities is already a smart growth plan.  It resulted from years of stakeholder and community input.  It puts development in towns and villages away from fire hazard, saves agricultural land needed for local fresh food, and meets all affordable housing needs with a capacity for 60,000 new residences.  It reduces long distance automobile commutes and greenhouse gas emissions, and saves the taxpayer money on infrastructure and services.  It is good for San Diego’s natural heritage and wildlife.

“The bad news is that major changes to the General Plan are being made through damaging amendments to put in place sprawl development that is contrary to all these worthy goals.  It is important to retain the integrity of the plan and its smart growth goals,” he said.

“Measure A provides the necessary balance of voter oversight over a narrow range of Board decisions, specifically new General Plan changes for sprawl development in rural areas.  It does not change anyone’s existing zoning, nor does it affect cities or County towns and villages.  It also protects the interests of small landowners,” he said.

Mayor McNamara concluded, “As Mayor of Escondido, a city which has had a voter approval requirement for significant changes to our General Plan (Proposition S) for over 20 years, I am in a unique position to assure the public that Measure A is a positive thing.  Economic development in Escondido has not been negatively impacted by Prop S.  Several public votes have been held when significant changes to the General Plan were sought.  Some passed per the will of the residents. Measure A puts trust in the people and gives them a say over the decisions that affect our collective future.”

According to the supporters of Measure A, the County General Plan concentrates new housing in areas where roads, public safety, schools and other services are already available. They are easier to defend from wildfire and have a lower taxpayer burden because they don’t require new infrastructure. The General Plan also zones for housing in areas that would limit traffic impacts.

“Measure A will give voters a say in San Diego’s land use decisions and will reduce the outsized influence of political contributions from developers; it will be a game changer,” said JP Theberge of Grow the San Diego Way and the Yes on A Campaign. “The General Plan has areas zoned for 60,000 more housing units in the county. Measure A will encourage us to build where we smartly planned for development rather than inefficiently and in a haphazard manner in our fire-prone backcountry. This approach has worked in Escondido and in many other jurisdictions, and it will work in the unincorporated San Diego County too.” 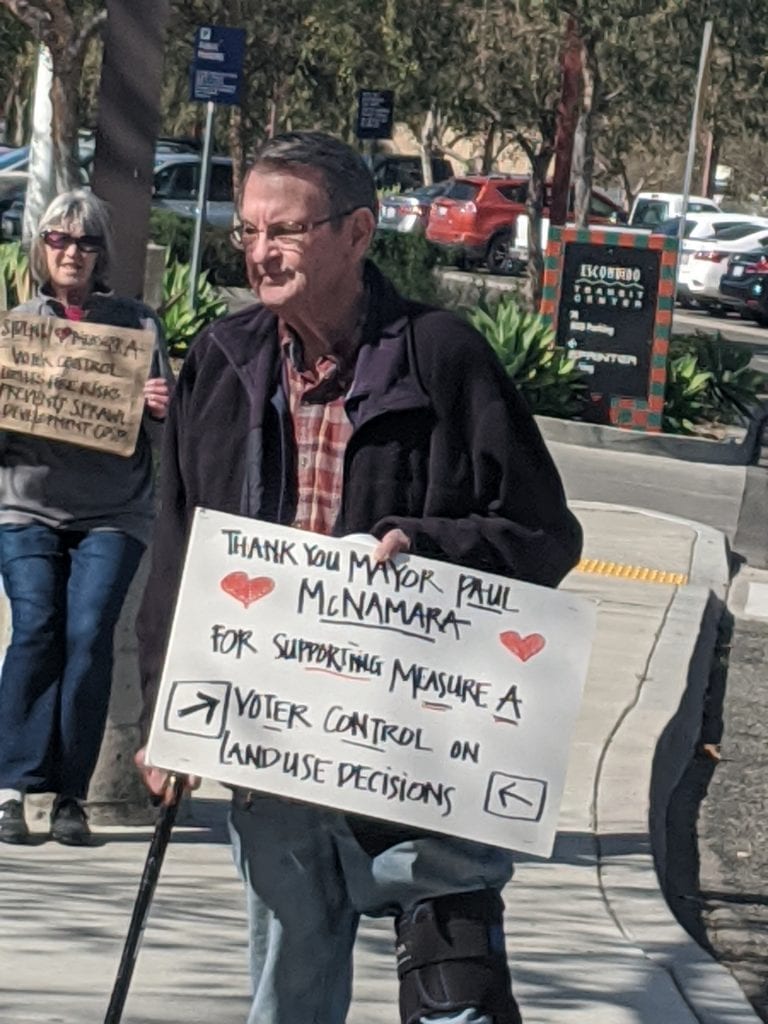 4 responses to “Mayor “Mac” urges support for Measure A”