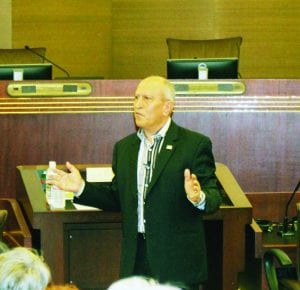 Mayor Sam Abed held his 15th Town Hall Meeting on October 3 at the city hall chambers. It was a pretty mild session, during which the mayor addressed questions about parking on Grand Avenue, housing developments and the city’s policy against marijuana sales within its limits.

Town hall meetings are held quarterly. Abed introduced them in 2010, shortly after he took office for the first time. This one, which was attended by about 30 residents, lasted a little more than an hour.  It began with a video highlighting the city’s progress and goals.

After the video Mayor Abed told the group, “I love engaging the public. I walked ten hours last weekend in Eureka Springs. Engaging in the public is very important, for you to hear from us and us to hear from you.”

At the beginning the question and answer session, Abed set the ground rules: “We are not going to have election questions.” He noted that the city management team was present to help answer questions, and included the city manager, city attorney and police and fire chief, among others.

The first questioner was a woman, a 39-year resident, who declared, “I’m proud to say I live in an un-sanctuary city.”  She voiced a concern about the city selling Parking Lot #1, which is next to Maple Street Plaza that serves several restaurants on Grand Avenue.

“I’m concerned about the safety of going out at after dark. I ask that you look at this more closely from the point of view of someone going out after dark,” said the woman.

Mayor Abed replied that if they do sell the parking lot that at least 76 of the 118 parking spaces in the lot would be replaced elsewhere in the downtown. “I would like to replace them all. We are adding diagonal parking on Grand Avenue to increase the number of spaces. We want to create an environment to benefit most of the businesses. We can’t keep a parking lot to benefit one business [this was a reference to Filippi’s Pizza Grotto, whose owner has said he may be forced to close if the parking lot is sold to development.]”  He later added, “Filippi’s is going to stay in business and they are doing very well.”

Abed continued, “Escondido is as safe today as it was in 1980. That’s why city council has made sure safety is one hundred percent staffed. We are proud to put public safety first.” He continued, “We are going to continue to fight sanctuary cities. We have joined the lawsuit against that. And the good news is that in Huntington Beach they sued the state and they won. The judge ruled that you can’t impose on a charter city.”

Editor’s Note: Last month a Superior Court judge ruled that the state of California through its so-called Sanctuary State law cannot require the city of Huntington Beach to not cooperate with federal immigration officials. Huntington Beach is a “charter city,” one of 121 such cities in the Golden State. The ruling does not apply to cities without charters, such as Escondido, of which there are 361. These are called general law cities.

“Of course, we expect this case to go all the way to the Supreme Court. It’s a federal issue, ultimately,” said the mayor.

The same questioner said she was concerned about approving too many developments in the city as they might strain the resources of the schools.

Abed replied that it was getting harder and harder to build in the county and city. “It’s becoming a crisis for low income people,” he said, adding that the public schools have been operating at a declining enrollment, “They still have the capacity to take more students.”

Abed defended bringing more homes to the downtown and said there will be “plenty of public hearings” to let the residents express their views. “If we don’t build homes in our downtown,” he said, city employees like firefighters and police, “and your sons and daughters won’t be able to afford to live in the city.”

A resident of the area near Kit Carson Park, an attorney with an office on Fifth Avenue, said he has clients involved in legal cannabis. He wants to open a dialogue with the city about allowing legal sales within city limits. He noted that as of January of this year by state law permits may be granted for sales, but that the city has a policy against dispensaries and retail pot sales.

“I understand that you are not going to make permits available next week, but I’d like to open a dialogue,” he said.

Abed responded that although Prop. 64 legalized the personal use of marijuana, and that individuals may grow up to five plants at home, it gave municipalities the option not to allow dispensaries or retail sales.

“The city council voted unanimously not to allow dispensaries, deliveries or growing,” he said, adding that when voters approved Prop. 64 they didn’t know it would allow public sales. “The city decided not to allow these things. We listened to our chief of police. Cities that allow them have nothing but problems. We are not set in stone. If a year from now things change, we are open minded. In the meantime you can go to Vista or Oceanside. We will see how this evolves. I’m concerned about having dispensaries next to schools.”

The attorney told Abed, “I would not be in favor of things to encourage criminality.  However, a majority of residents in Escondido voted for Prop. 64. To say that people misunderstood it is a disservice to the voters.”

Abed responded that while true that 51% of the voters of Escondido voted for Prop. 64, that “when Prop. 64 passed there was no talk about dispensaries next to schools.” He said that some retail operators “are under the misapprehension that dispensaries can open here.” He promised to “continue to listen to people.” However, he was concerned about pot as an “entry drug,” i.e. a drug that leads to other drugs.

Abed appeared to leave a crack open in the closed door: “We can look into this, particularly marijuana use for medical use. But when Prop. 64 passed there was no talk about dispensaries next to schools.”

A man in the audience who said he had been diagnosed with cancer of the esophagus, said marijuana helps with that pain. “There are people who don’t want to take opioids and can’t understand why you shut them down, when the majority of people supported that—and I don’t think they are ignorant,” he said. “I think the city council should take it under consideration again. And not have dispensaries close to schools. Don’t fool yourself, the kids are going to get the drugs. You can’t buy at the dispensary unless you are 21.”

He added, “I live by Escondido High School and they are building million dollar houses. How can anybody afford $600,000 or $900,000 homes? Families are being squeezed out because they can’t afford the rent. What kind of control is the city going to put on these developers?”

The mayor addressed the man’s first concern. “Our problem is not with medical marijuana.

We are talking about marijuana being available to anyone anywhere. You can obtain it from nearby cities. Personally I want to make sure that if someone is sick to make it available. But I have a problem with dispensaries next to schools.”

He asked for the City Attorney Michael McGuinness to explain the city’s options under the law. He said, “State law gives local agencies discretion to make these kind of policy decisions. We comply with state law. Our police officers abide by the law.”

The private attorney who first brought this up said, “Ninety percent of the state is in favor of medical marijuana and sixty percent support recreational use. Giving it to the black market may not be in the city’s best interest.”  He suggested putting a referendum on the ballot to let city voters decide the question.

Abed said the council was unlikely to put that on the ballot. And until the law was clearer about the city’s obligations they would follow the current policy. The city recently closed a dispensary that opened in violation of the local ordinance. “We are going to go and close them because they are violating the city ordinance. We are the five officials elected by the people,” he said. “I don’t see any time soon that we are going to change this policy. There is a higher dialogue going on at the federal level.”

The mayor further explained the city’s development situation. “Escondido is almost built out. We have a sphere of influence around the city. The high priced houses are not meant for the lower end, but they free up units for the lower end. We used to build more low income housing when we had redevelopment agency funds. We have a disproportionate amount of low income housing in the city now, but the state took this funding away from us. So we are building less and less units. A lot of cities are unable to build low income housing because the state.  We have to build mostly in the urban core because they have the least influence on traffic. We are going by the general plan that was approved by the voters.  You have several projects, some were approved, I voted no on the Country Club project because it was too dense, but it was approved.”

He added, “The question is where do we build them? I think the best solution is in the downtown where the impact in minimal. The affordability index, and interest rates are going up. Only one in ten can afford to buy. It is a crisis. The rental properties suffer as well. We are going to do infills. It’s not the quantity we want; we look at the quality projects for our city.”

As the Town Hall closed Abed thanked those who had participated and quipped, “Please contact us before you go wild on social media.”