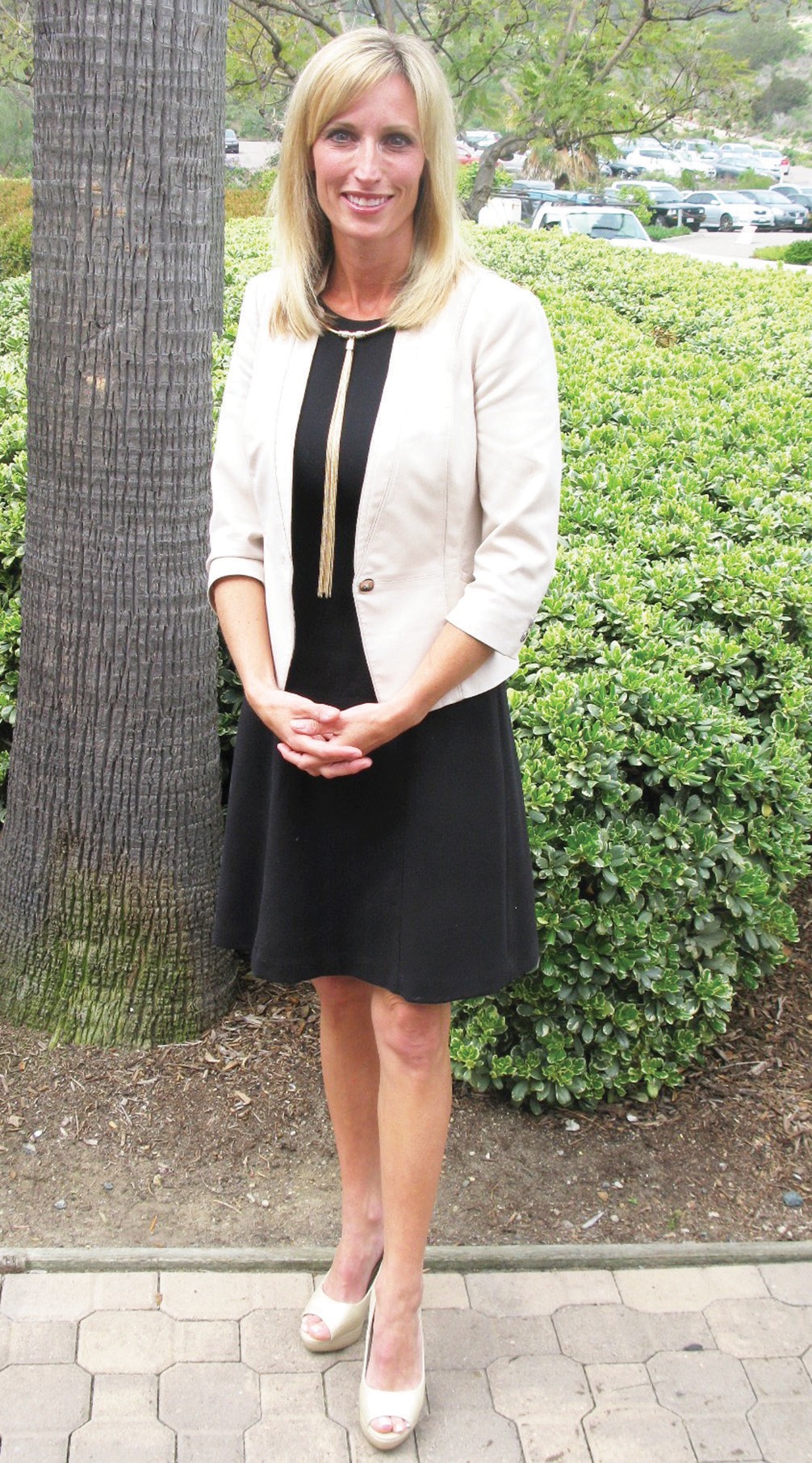 Mayor Kristin Gaspar takes her seat at the Panera Bread outlet at The Forum Carlsbad on Calle Barcelona. She sits erect, on the edge of her seat, alert and ready to do battle in her race to become the Third District County Supervisor.

She is enthusiastic, buoyant even, and a nonstop communicator of her political message: Get behind Kristin Gaspar. Six years ago, she was elected to the Encinitas City Council. “In 2010, I loaded my eight-week- old, my 2-year-old and my 4-year-old into a red Flyer wagon and started walking door-to-door,” to attract vot­ers to her cause, she said.

In 2014 she became the first at- large elected mayor of Encinitas after the Council abandoned the practice of electing the mayor from among its members.

The impetus for her political career came earlier, when Republican Rep. Mimi Walters of the 45th Congres­sional District, was a California state senator.

Gaspar said some friends dragged her into a political meeting and “somebody introduced me (to Wal­ters) as the next (state) senator. I said ‘no way’ and (Walters) said ‘What’s your excuse?’”

“I pointed to my stomach and said, right here.” Walters replied, “That’s no excuse. I had four kids and I was walking pre­cincts with number four” in her womb. “People are thrilled to see people who are involved in their commu­nity,” Gaspar said. “They know me as Coach Kristin from Pop Warner Cheerleading. They know me as the mom who is teaching the civics pro­gram at the school.”

Other constituents are sometimes taken aback. “They don’t automatically think of me as the city’s mayor and I love that. They say, ‘What do you do?’ and I say ‘I’m the mayor’ and then they say ‘What do you really do?’”

She’s a full time enthusiast for the city that she comes from. She went to Mission Estancia Elementary School and was a Mavericks cheerleader at La Costa Canyon High School. Her mother worked for the City of Carls­bad during tough times, but provided good schooling for Kristin, including attending Arizona State University’s Walter Cronkite School of Journalism.

So she bristles at anyone who would dare to insult her hometown, as Es­condido Mayor Sam Abed has done.

Abed’s criticism extends to her role in running Encinitas.

He told the T-A in February: “Gas­par is a young, elected mayor and she needs to fix her city. Her city is run by unions and activists and she has not done anything. We’ll give her credit for banning plastic bags and plastic cups. The city really needs to get (its) priorities straight.”

Gaspar said she was puzzled by Abed’s attack.

“I had to stop and think when he said that. What role have the unions had in our city? And the unions don’t have a big presence in Encinitas. They are not active in our campaigns.”

She said the city negotiates with few unions other than the municipal em­ployees’ unions, whose members seem to be satisfied. “We have really good employee retention and we haven’t had any real issues with the union.”

Then she offered a theory, saying that Abed was supposed to be fighting the unions during his 2014 mayoral con­test when he “moved to stop a 99 Cent (Only) store” that was also opposed by the United Food and Commercial Workers, Local 135, Gaspar said. “The union then sent out mailers against (Councilwoman) Olga Diaz, Abed’s opponent” in the mayoral race.”

The union’s mailers said Diaz was the deciding vote in allowing the 99 Cent Only store to open downtown. Abed was re-elected with 16,224 votes, 59 percent of the total.

“That his campaign was based on the idea that he was fighting the unions was an interesting dynamic,” Gaspar said, before bursting into a barrage of anti-Abed pro-Encinitas boosterism.

“We have some of the highest reten­tion rates in our commercial centers and there’s a big demand for housing in our community,” she said. “There are people who have lived here for genera­tions.”

“I think he needs to spend more time here to see what Encinitas is about. That’s been a big part of my campaign, getting to know the cities that I plan to serve and what are the issues within those cities and not prejudging them,” Gaspar said.

“You know, what I look for in an elected official is someone who is humble and doesn’t take credit for ev­erything that makes a city run well,” she said. “So I spend a lot of time cred­iting the people who work in our com­munity to make it a great place.”

She said Abed, who touts Escon­dido’s balanced budget, started on its City Council in 2004 and in the suc­ceeding years the city’s budget was in the red. She was reminded that Abed had said the council wouldn’t adopt his fiscal suggestions.

“Well, you have to own what hap­pened regardless. Even if I’m in the minority and the city is tanking … I’d have to take ownership of it. I’d like to know I am doing anything in my power to fix it.”

Gaspar’s personal fundraising has been prodigious. She gathered $105,884, according to a report in February and pointed out that none of it came from her bank account. She said all three candidates have around $100,000 to spend on the June 7 pri­mary.

Gaspar referenced her other oppo­nent, incumbent Dave Roberts, saying that her strategy for the primary vote is to get her message out to the vot­ers, have a financially strong campaign and:

“I think the whole campaign is won or lost on showcasing someone who is go­ing to fill that role, absent any personal distractions and is someone who has a track record of managing the workplace and works well with others.”

“It is unacceptable that the taxpayers are on the hook for the situation that they got in with Supervisor Roberts,” Gaspar said, “You should put people into office who have a high degree of integrity and are ethical individuals, so the taxpayers don’t have to fill the bill for unethical (behavior) … you have to manage that workplace.”

As a Rotarian she started the non­profit San Dieguito Sports Medicine Foundation for preventative and on-the- field care for student athletes.

She is CFO of Gaspar Doctors of Physical Therapy in Encinitas, which she operates with her husband Paul. It employs around 140 doctors, therapy aides and others.

She and Solana Beach officials ne­gotiated a successful, long-term beach sand retention program by Civil Works Review Board of the Army Corps of Engineers in Washington D.C. The project also involves unstable cliffs that have caused at least five deaths over the past 10 years.

As mayor she oversaw the comple­tion of Encinitas Community Park, in November 2014. The long-time eye­sore and dilapidated 44 acre greenhouse property was turned into multi-use sports fields, a lake, skatepark and open space.