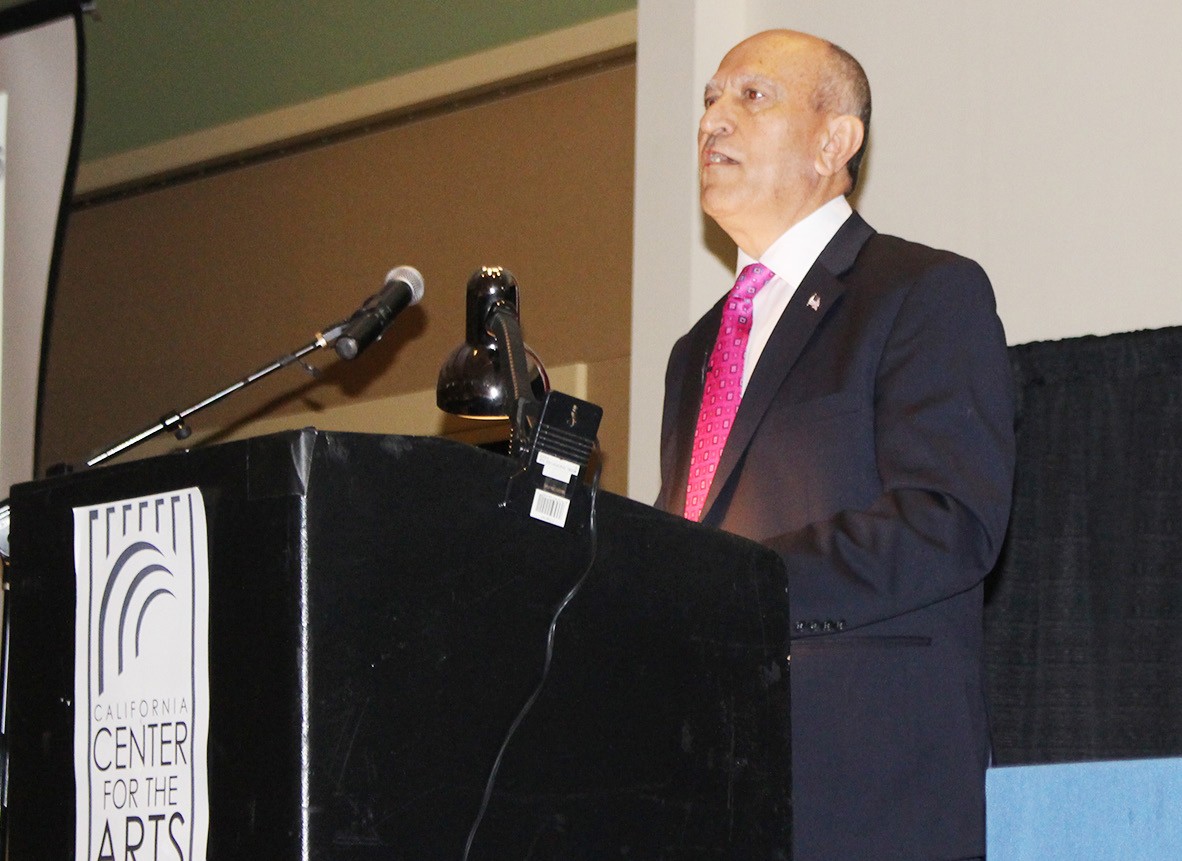 “As my favorite president Ronald Reagan once said, ‘America is too great for small dreams,’” Mayor Sam Abed told the State of the City crowd. “So is Escondido.”

“Our city enjoys one of the most vi­brant economies in San Diego,” he told the gathering in his speech at the State of the City event at the California Center for the Arts on Wednesday, February 24.

“Today we have 25 significant residen­tial developments on 1,800 housing units, upscale retail and commercial properties that are being built or going through the development process,” said the mayor. 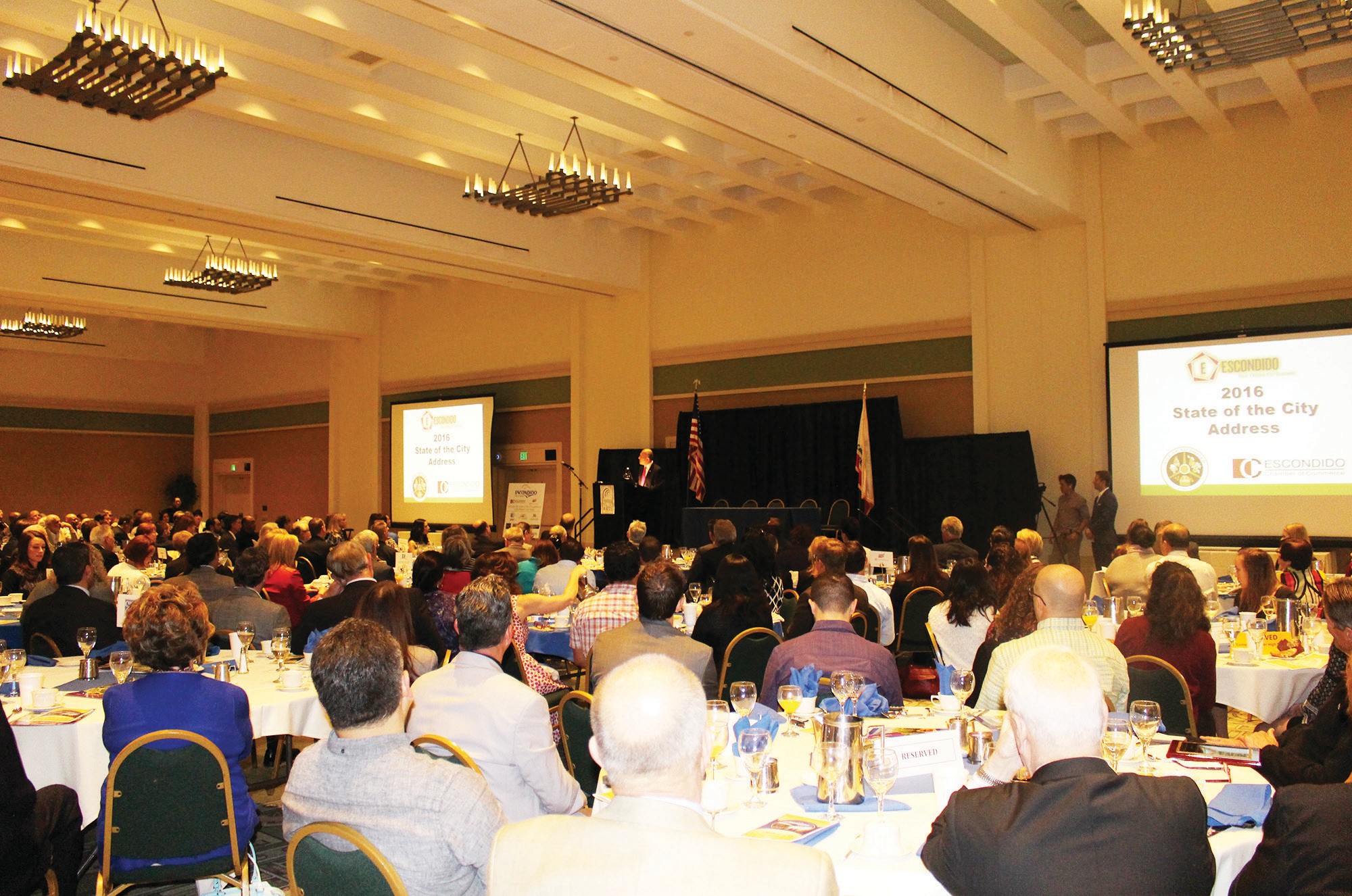 More than 400 citizens, officials from other governments, business boosters and others attended the State of the City speech and awards ceremony on Feb 24 at the California Center for the Arts Conference Center. Mayor Sam Abed said the city was well fixed for the future, having attained economic goals of a balanced budget and fiscal restraint.

More: “The private sector’s confidence is stronger than ever. Between 2010 and 2014 we attracted 500 net new business­es. Last year alone, we brought another 450 net new businesses to Escondido, creating hundreds of new jobs.” 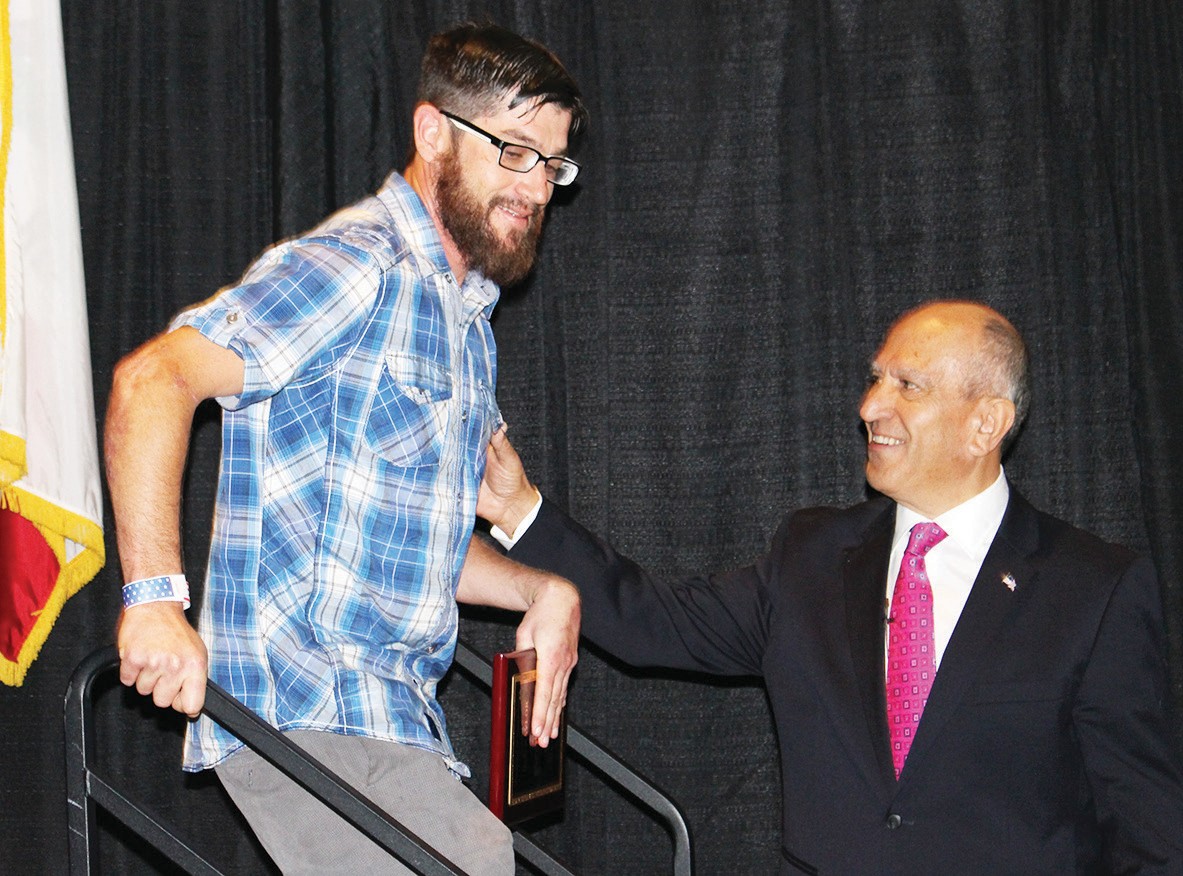 Mayor Sam Abed helps Dan the Man Naylor down the steps after Dan received the award for Public Service from Councilman Ed Gallo.

He said tourism, a “significant part of Escondido’s diverse economy,” brought in an 8 percent increase in hotel taxes due to successful promotion by the city’s Visit Escondido campaign.

The internationally known craft beer maker Stone Brewery (formerly Stone Brewing Co.) was the third best desti­nation in North County. The Escon­dido based business is the ninth larg­est craft brewery in the nation, and is building a brewery in Germany.

“Our historic downtown is full of special

Mayor Sam Abed spoke on various issues including infrastructure, public safety and the local economy at the State of the City address on Feb. 24

events and activities,” Abed said. “Last year the Downtown Busi­ness Association launched its first ever Tamale Festival in Grape Day Park, which was an instant hit.”

He hailed new downtown business­es that are “Cruisin’ Grand”: Cute Cakes, Burger Bench, and Wooden Spoon. “In addition to the Children’s Museum and the History Center, families can now enjoy the amazing Roynon Museum of Science and Pa­leontology,” he said.

Along with the increase in “Tran­sient Occupancy” or hotel taxes, the city’s sales take has increased from $22 million in 2010 to $34 million in

The Orange Glen High School ROTC, Charles Jenkins commanding served as honor guard for the Flag Salute and Pledge of Allegiance for the State of the City Address.

“Our successful financial policy, five year financial plan and our cur­rent reserve balance at 19 percent of the General Fund have improved our general obligation bond rating to AA- by Standard and Poor’s last year,” Abed said. 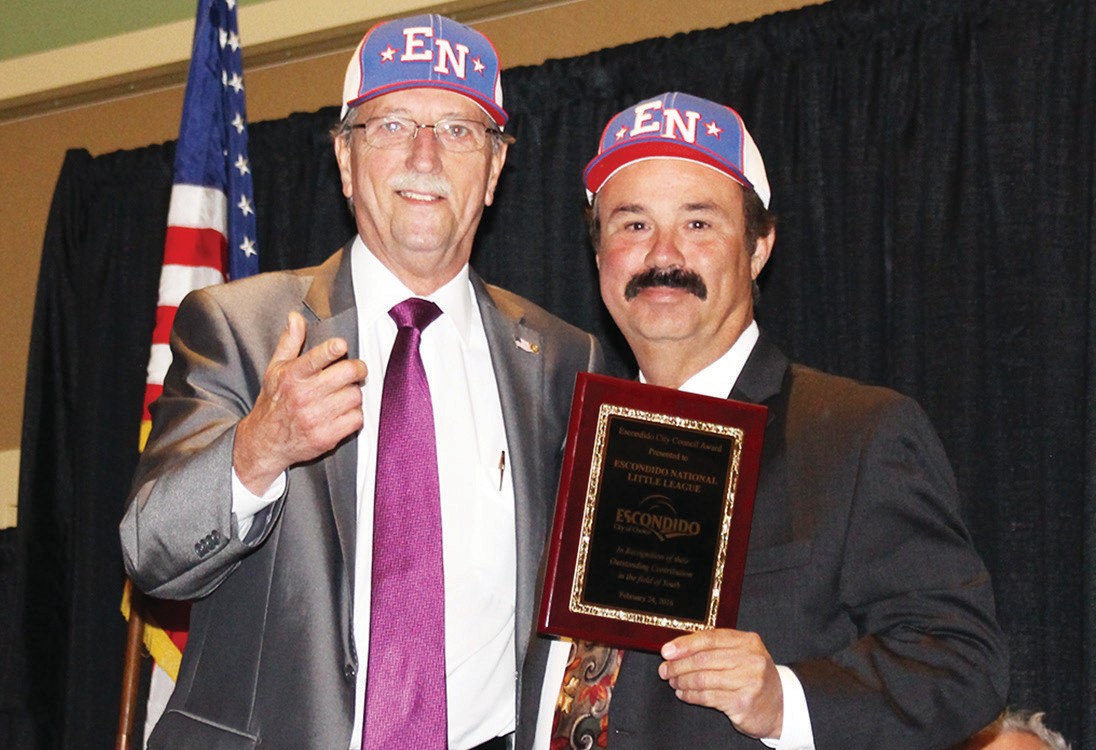 state prisons to our neighborhoods and local jails,” he said.

Proposition 47 lowered the punish­ment for many non-violent crimes from felonies to misdemeanors, which will put more criminals on the street, according to Abed.

“This year the Governor (Jerry Brown) will likely introduce sentenc­ing restructuring laws that will add to the challenges to crime reduction this year,” he said.

Community-oriented policing and a second Neighborhood Transforma­tion Project “in the urban area” and the East Valley Business Association has been revived “to help create a better business environment,” said the mayor.

The Fire Department hired an Emergency 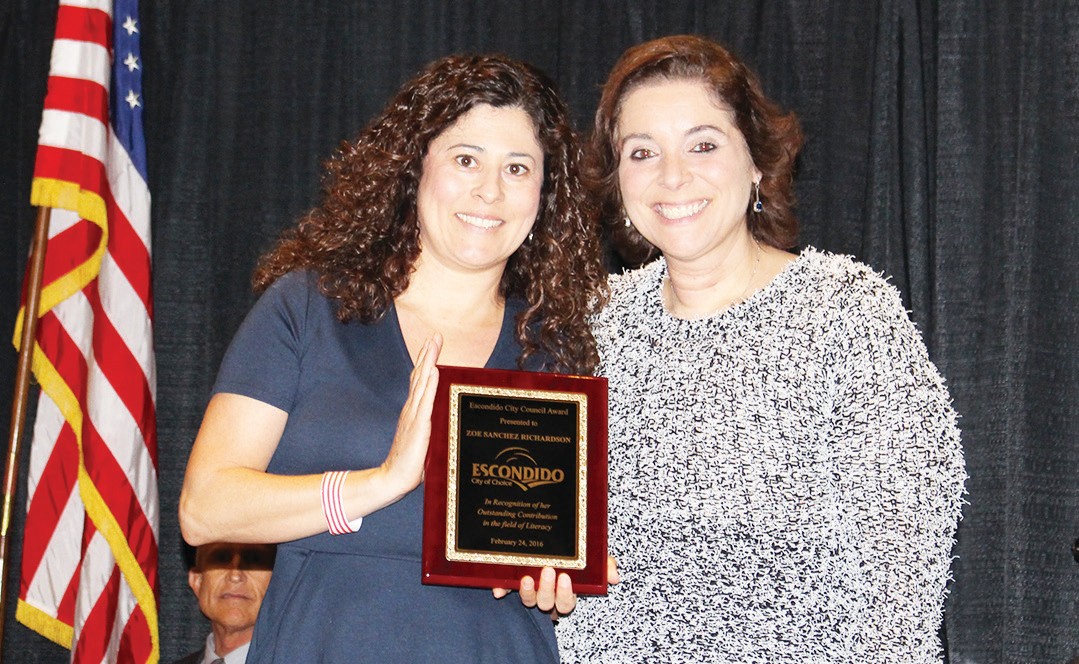 Preparedness Manager last year and will work with the Pub­lic Works Department on being ready for fire, floods, earthquakes, and oth­er natural disasters.

The Fire Department received $626,000 last year for training and equipment, the mayor noted.

The city is working on infrastruc­ture projects, including the “final stretch” of Valley Center Road, which was partly funded by $800,000 donation from the Rincon Band of Luiseño Indians.

North County city officials are working with the San Diego Asso­ciation of Governments (SANDAG) to improve freeways, including the widening of the Hwy 78, I-15 and I-5 freeways. 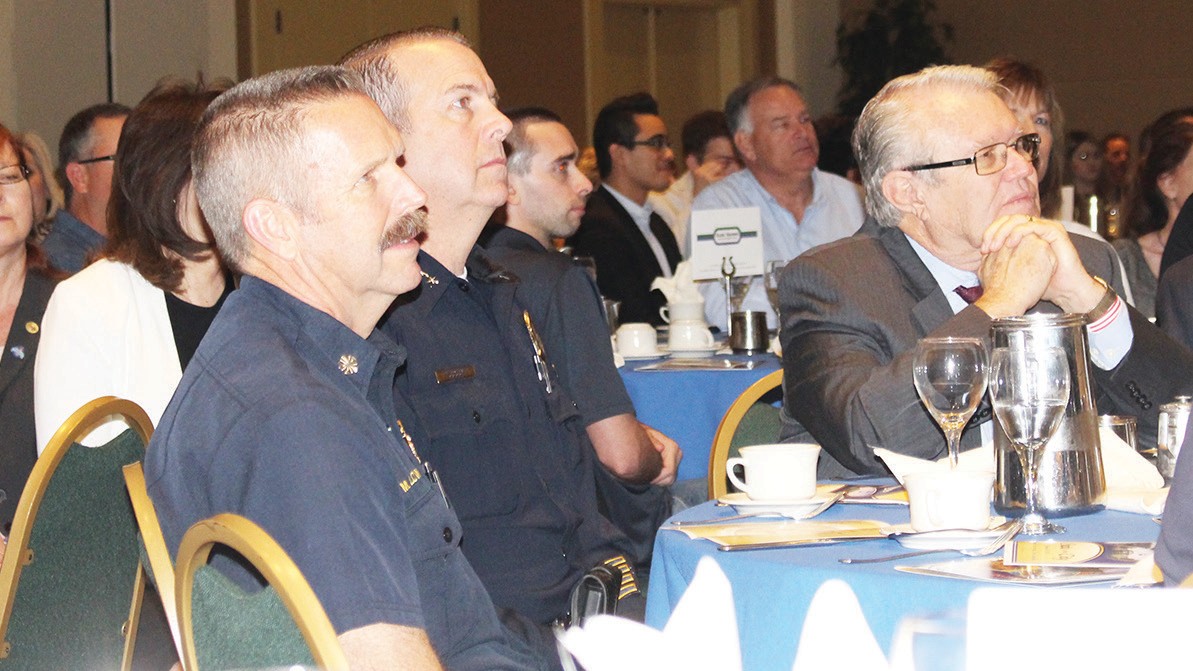 ABOVE: Police Chief Craig Carter and officials applauded Mayor Abed’s remarks in the State of the City Address.

The city is also seeking grants to fund an extension of Citra­cado Parkway to link the 78 and I-15 freeways. The mayor and mayors of Vista, Carlsbad, Oceanside and San Marcos formed the “Innovate 78” to work toward widening and improv­ing the 78 Corridor.

The mayor said culture is on tap in Escondido with the California Cen­ter for the Arts, the Escondido Arts Partnership and Queen Califia’s Magical Circle Garden at Kit Car­son Park. Nearly 300,000 visitors are expected at the Center for the Arts alone. 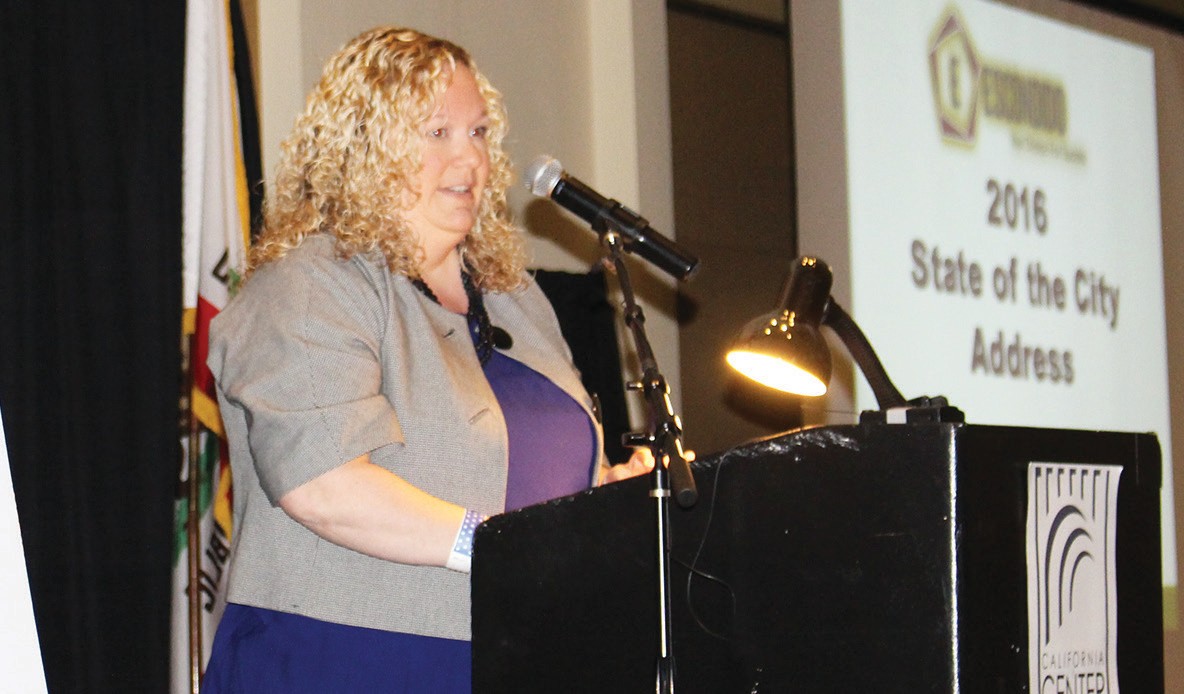 RIGHT: Alicia Reeves, Chairwoman of the Escondido Chamber of Com­merce Board of Directors spoke on the chamber’s efforts to put Escon­dido in the spotlight with its promotions of business, local festivals and civic boosterism in general.

conclusion of his re­marks, Mayor Abed said: “As my favorite president Ronald Reagan once said, ‘America is too great for small dreams.’ So is Escondido.

“Our big dreams should be in­spired by our social and economic potentials and not by our limita­tions. When we work together, we can make our dreams a reality.”

“Let’s build a city driven by val­ues, optimism and faith, where work and family are at the center of our lives and the foundation of our dignity.”