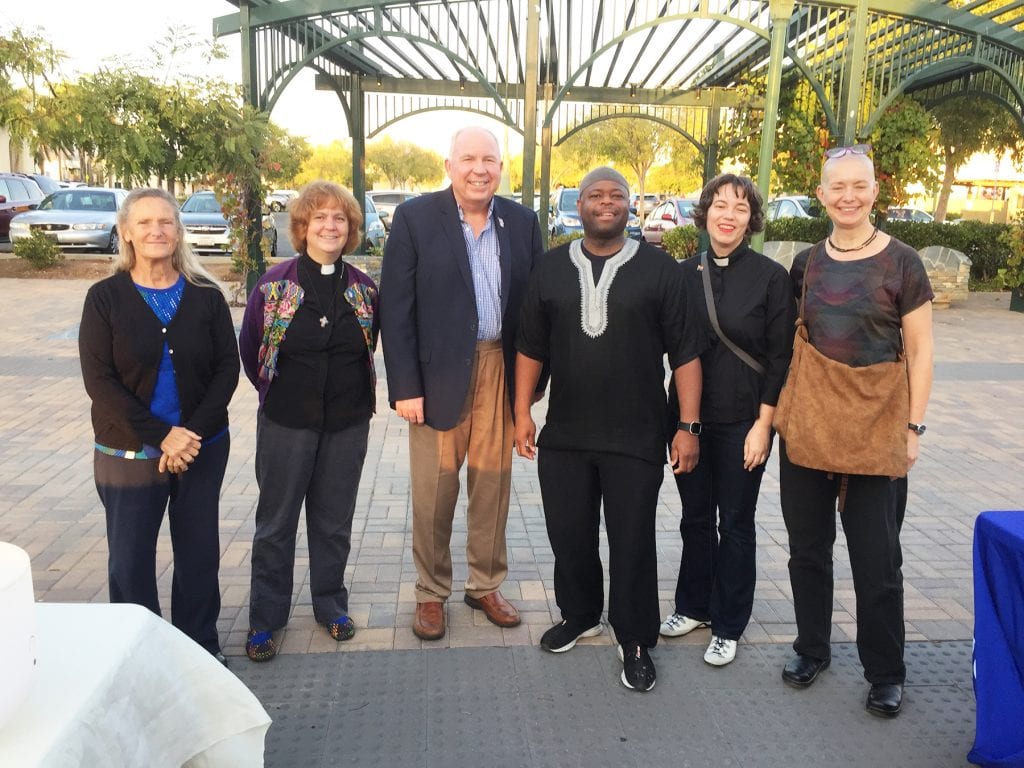 “My donors are small and live in the city”

Mayoral candidate Paul McNamara challenges some of the claims that incumbent Mayor Sam Abed is making on the campaign trail and in forums they are jointly attending. It’s about a month until the city election.

The challenger starts with Abed’s claim that the city has created 2,000 new businesses and 1,500 new jobs. “They are counting small businesses operating out of their homes,” says McNamara. “Businesses where you pay $40 to the city for a license. It’s not true that all new businesses pay taxes. You can’t claim you have created two thousand new businesses and say that you aren’t collecting enough sales tax revenue.”

McNamara points to Grand Avenue, “where you have ‘for lease’ signs everywhere. You can’t have it both ways. Where are the new businesses? You can’t say ‘We don’t have the sales tax to pay for things but we have all those new businesses.’ ”

He also criticizes Abed for talking about how the board has balanced the budget. “They always talk about balancing the budget. Well, you are required to balance the budget. Don’t you have a staff that balances the budget? It’s like saying, ‘I stop at red lights.’ Of course, we do!”

He adds, “A better claim would be ‘We have a budget that reflects the priorities of the people.’ That’s the claim I would make if I was the mayor.”

McNamara also challenges the mayor’s boast that crime has gone down on his watch. “To listen to him you would think he is personally responsible for the lower rate. Our crime rate follows the national trend. It’s not any lower than in San Marcos or Vista.”

He adds, “While the crime rate has gone down, the mayor is not telling us that when you divide the city as he has done that you end up with a lot of unreported crime. The tactic of dividing the city is emboldening the criminal element. The police are not going to be able to maintain their informants because people are afraid of them It’s a failed policy.”

McNamara criticizes Abed for his donors, claiming that he (McNamara) doesn’t take campaign money from outside developers. “He just raised $91,000. That’s outrageous for a city our size. Abed gets all his money from special interests and developers. I personally think it makes it look like our city is for sale.”

At a recent forum Abed criticized McNamara for accepting a donation from Jack Raymond, whom he called a developer. “ ‘How is he any different than the donors that give to you?’ “ Abed asked.

“Jack Raymond is the man whose name is on the Chamber of Commerce building,” said McNamara. “He donated $1,000, not thousands of dollars like the developers who have given to Sam. But what’s important is that he’s retired. He is not doing developments now. That’s not the same as taking money from people the city is doing business with. Is the mayor really making that same comparison?”

McNamara says his typical donation is $10, $25 and $50. “A few are more than that. Mostly, they are small and from people who vote in the city.”

Asked to comment about the recent action of the city council to put Parking Lot #1 up for sale, he said, “I don’t know why they are doing that. When I think of revitalizing Grand Avenue; how about we put in a second level of parking and not additional housing? To make it easier to go downtown. Build a parking structure to encourage people to go there. Of all the plans we are developing I don’t see the benefits of this one. But I see the downtown and you are going to put people without parking there.”

McNamara supports “infill,” “but what are the second and third order effects on traffic and parking if you do that? I don’t think the current leadership thinks that through. It’s more important to create businesses that will bring people to the downtown. If you are reenergizing the downtown you should create a reason for people to come there. If you have houses but vacant business buildings it becomes less attractive. It’s not like we don’t have people at the downtown now. But they roll up the streets at 7 p.m. So where are the people going to go?”

The candidate says he has talked to businesses in that area who tell him the city doesn’t want people to stay out late. “I’d like to see a mini-Gaslamp instead of people having to drive ten or fifteen minutes to other cities or to the coast. Why not come here? But the city doesn’t want to encourage businesses to stay open late. So what’s the point in trying without later hours?”

He favors a more “holistic approach” that involves paying more attention to facilities that not only local residents but visitors use, such as soccer fields. “You can’t just do one thing,” he said. “When you have someone come here to play soccer from out of town and they say, ‘I only know the city by that feature’ and they say it’s not maintained well. It becomes part of the city’s reputation. That doesn’t lift the city up.”

The reason is because the city outsources some maintenance of city parks to private companies. “If you are putting the city into a downward spiral, what’s the point?” asks McNamara. “We don’t celebrate what we have and we what we do have we are putting into slow decline. We are not addressing things in a holistic way.”

He feels that many residents care about their city and issues such as sports, the hospital, nonprofits or parks, “but they don’t have a connection to the city and they feel ignored.” He adds, “No city has endless money to spend, nor should it. But the city can help connect the dots that are concerned with a particular issue. I would make sure we have special committees for these issues to show that we are listening to the residents.”

Such committees exist for the city library, and the council ignored them, he says. “The library has a foundation and a board that advised against the library outsourcing. Why have such committees and not listen to what they recommend or even attend their meetings? You will always have guns or butter decisions but you need to have dialogue. What bothers me is the process.”

Still talking about the library system, McNamara shifts his attention to an old festering political sore with many residents: closing the East Valley Branch several years ago and eventually selling the land to the Escondido Charter High School.  “They never made the case to the residents that that library wasn’t being used. Or that the use of the Charter High School was more important than that use,” says McNamara.

Sometimes just showing up is important, says McNamara. That is why recently he showed up at a suicide awareness event. “Just to show them that I think what they are doing is important.”