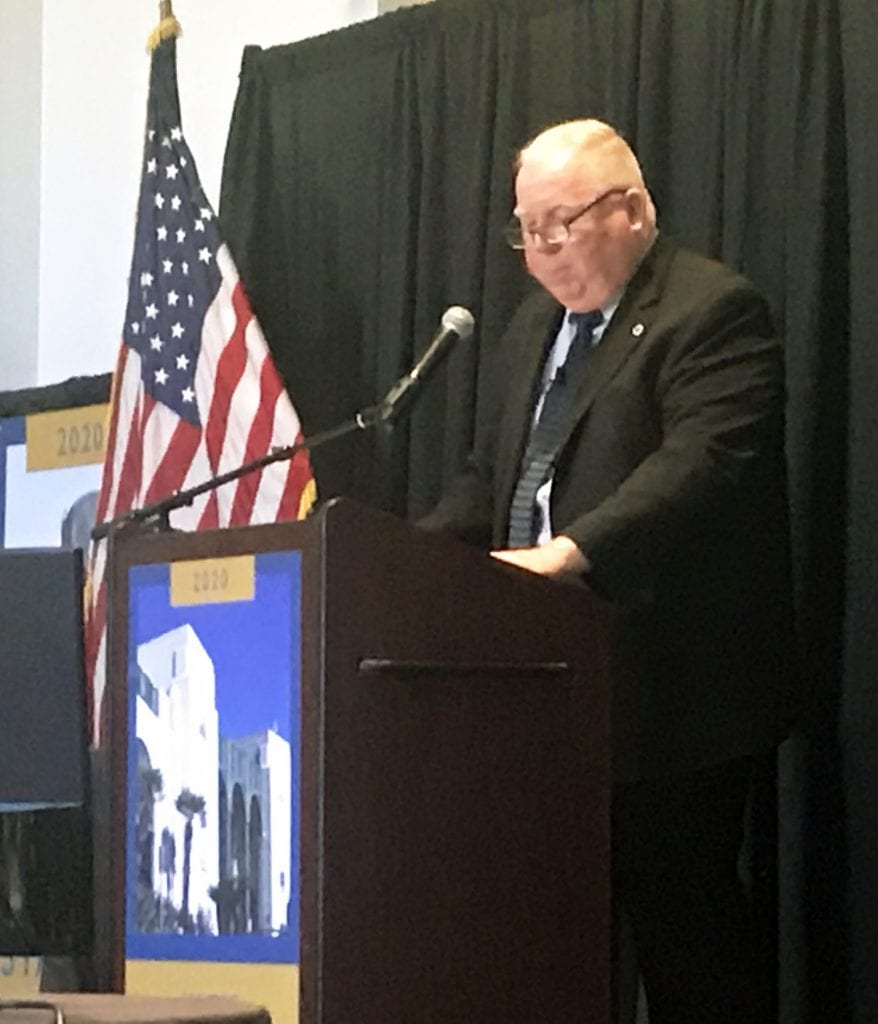 Mayor Paul McNamara gave the State of the City address.

Mayor Paul “Mac” McNamara called on Escondidans to “find your passion whether it is art, homelessness, health, education or whatever it may be and become part of the solution” at the annual State of the City address Wednesday morning at the California Center for the Arts, Escondido.

The address was held after a brief meet and greet that included pastries and coffee.

The call to action came near the end of the annual address in which the mayor laid the foundation for a campaign by the city to energize voters into supporting a sales tax hike to keep the city’s infrastructure from being whittled away by the rising costs of pensions.

The mayor said, “The City Council is considering placing a Public Safety & Essential Services Revenue Measure on the November 2020 ballot to address the increased needs of maintaining and enhancing municipal services in the community.”

He cited a recent survey of 1,000 residents that found that 65 percent of those surveyed “would support a one-cent sales tax increase to preserve and enhance public safety and city services, and secure Escondido’s financial future.”

The current sales tax rate in Escondido is 7.75%. The city gets 1% of that with the balance going to the state, county and SANDAG. “In contrast,” said the mayor, “100 percent of the revenue generated by the Public Safety & Essential Services Revenue Measure would stay in Escondido. This would allow us to maintain and enhance police, fire, paramedic response and other city services, improve city roads, parks and other city facilities, and enhance the quality of life in our neighborhoods.”

The mayor praised city staff: “I cannot even begin to describe how much I’ve learned to appreciate the professional staff that run our City. We’re fortunate to have a City Manager that is an encyclopedia of knowledge and organizational history, as well as having a great sense of humor, which you need on occasion. He and our team of department heads are incredibly passionate about keeping Escondido safe, clean, and efficiently run. They work tirelessly to spend our tax dollars wisely. It is a colossal amount of work to run a full-service City of 152,000 spread over 37.5 square miles on a day to day basis.”

McNamara noted some of the city’s accomplishments in the prior year, such as 526 new units which are part of 28 entitled residential projects and with a grand total of 1,303 units approved for construction. “At the same time, we remain poised to become a local leader in climate action planning by adopting 2035 targets for emissions reductions. All other cities except for San Diego rely on 2030 targets which means that our plan will be even more trail blazing than those of our neighboring cities). Our City Council has been working on plans and standards that will lead by example.”

He praised the Escondido Police Department, noting, “Our crime rate is the lowest it has been since the 1980’s. Last year, our Fire Department responded to nearly 16,000 calls for fire, rescue and emergency medical assistance. That is 22% more emergency calls than they handled just six years ago when our fire stations had the same number of firefighters and six more paramedics.”

Homelessness continues to be a top priority. “In 2019 alone,” said the mayor, “we helped over 60 homeless residents get off the street by connecting them with services and resources or by helping them reconnect with members of their family. The impact to families and those individuals is enormous. We recognize that the cycle of arresting, releasing and arresting does not do much in the long run. We are willing to go the extra mile, and to also address addiction and mental health.”

After viewing a five minute video on the city prepared by staff, the mayor talked about “changing the narrative.” “That means we’re going to talk (really brag) about Escondido. The City is bigger, better and more dynamic than we give it credit. All you have to do is look around and see what we have to offer in culture, sports, and education to name a few. What city has the unique combination of an open mic for opera and the largest Future Farmers of America chapter in the county, coupled to international artists that attract world tourists. No one,” he said.

He talked about introducing the Community Advisory Groups that give citizens a way to get involved. There are CAGs on Health and Healthy Living; Recreation and Youth Activities, Homelessness and Housing, Economic Development and Agriculture; Climate Action and Environment; and Arts and Culture.

The mayor concluded: “Last year I said we are blessed to live in Escondido. I also said that living here, I think of the bumper sticker I saw when I was stationed in the Marine Corps in the South. It said, “American by birth, Southern by the grace of God.” I like the second line because I think of myself as an Escondidan by the grace of God. Now I think of myself as an Escondidan by choice. I know you do too! Please join me once again in reaffirming the values that have made this city, and let us go into the future as a caring community whose values and faith are the bedrocks we build our future on.”

The biographies of the recipients are printed below. They were read by the council member making the presentation. 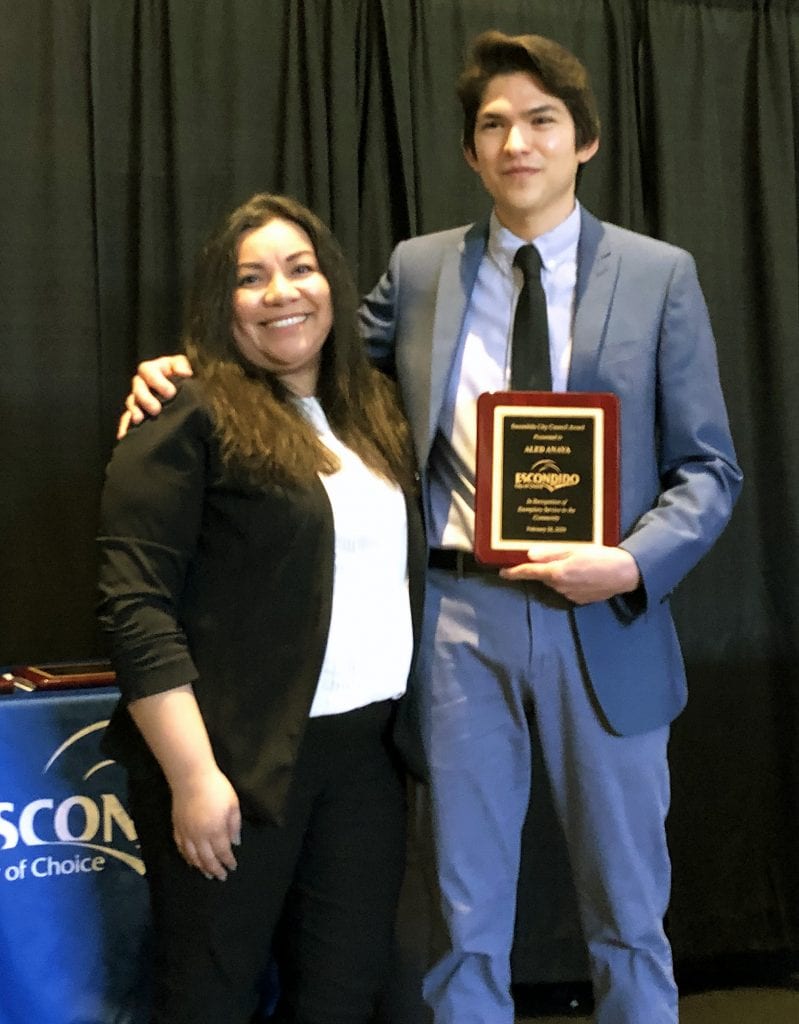 Aled Anaya is an Escondido native and Orange Glen graduate who now works for the Escondido Union High School District at Orange Glen High School. As an educator, he is now teaching the same painting and graphics program that helped develop him as an artist. He leads the mural club offering his expertise and talents to empower the youth of our community through arts and culture.  Aled has been involved with the arts for many years. You can see his work around the City in the murals at Del Lago Academy, Orange Glen High School, and most recently the exterior mural at the San Diego Children’s Discovery Museum.  He represented his hometown of Escondido when given the opportunity to paint a mural at the historic Chicano Park. Aled has contributed greatly to Escondido’s status as a cultural center and has positioned himself as a leader, guiding future generations to change the world through their art. 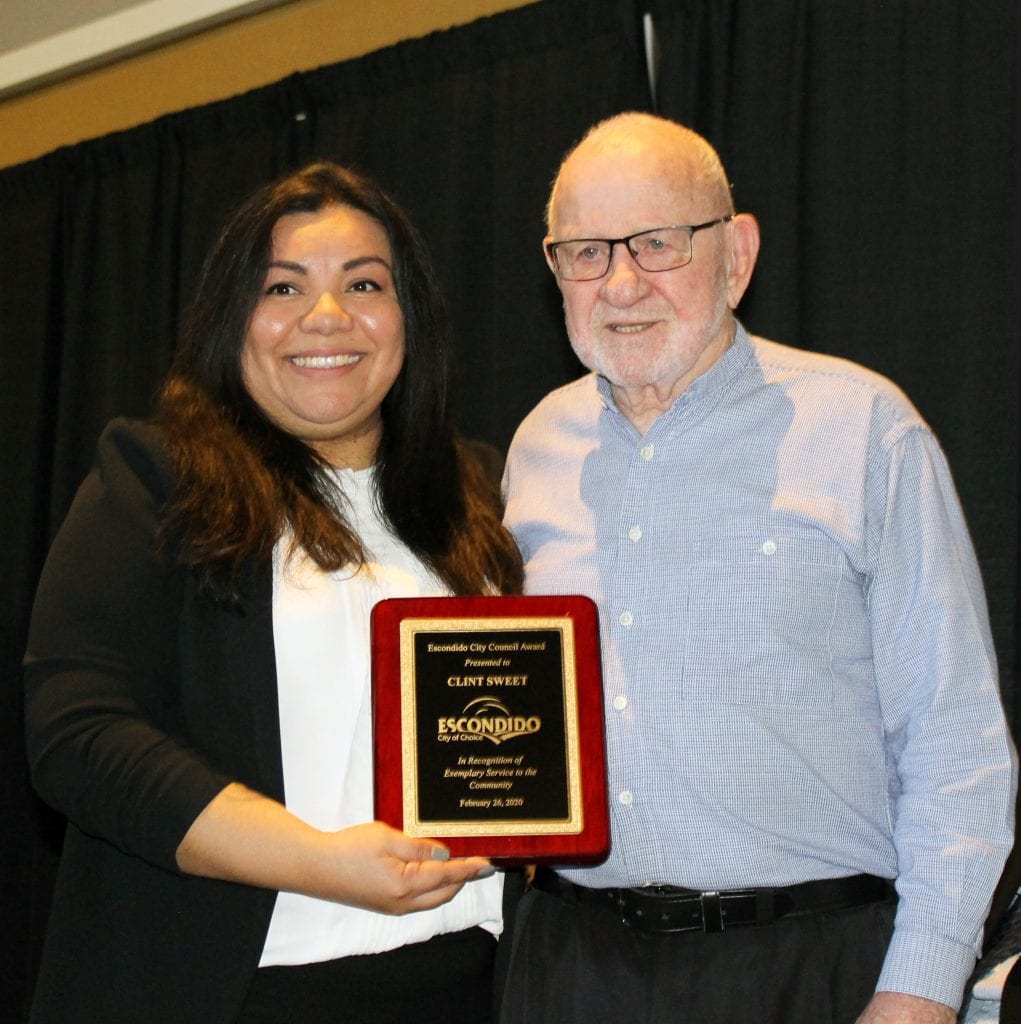 Clint Sweet became a member of the Fire Department Volunteer Program in 2010 and just retired from the program in January 2020. After 10 years of service Clint has contributed greatly to the Department and has served as the program volunteer coordinator since 2017. He and his wife moved to Escondido near Fire Station 3 in 2000, where he quickly befriended a paramedic. Shortly after he learned of the Support Volunteer program and became a highly valued member of the team right away.

The support volunteer program involves serving the public by providing logistic, administrative and public education functions. During Clint’s 10 years in the program he was involved with presentations at special events, smoke alarm installation events, fire extinguisher trainings and much more. Clint’s life experiences, strong working relationships, dependability, self-reliance, strong decision-making ability and his desire to volunteer his time and talents have strengthened the Fire Department and the service provided to the community. He has always been someone the department can count on and look to for guidance. Clint has provided a total of 3,680 hours of service to the City of Escondido Fire Department and the contributions he has made will carry on for many years to come. 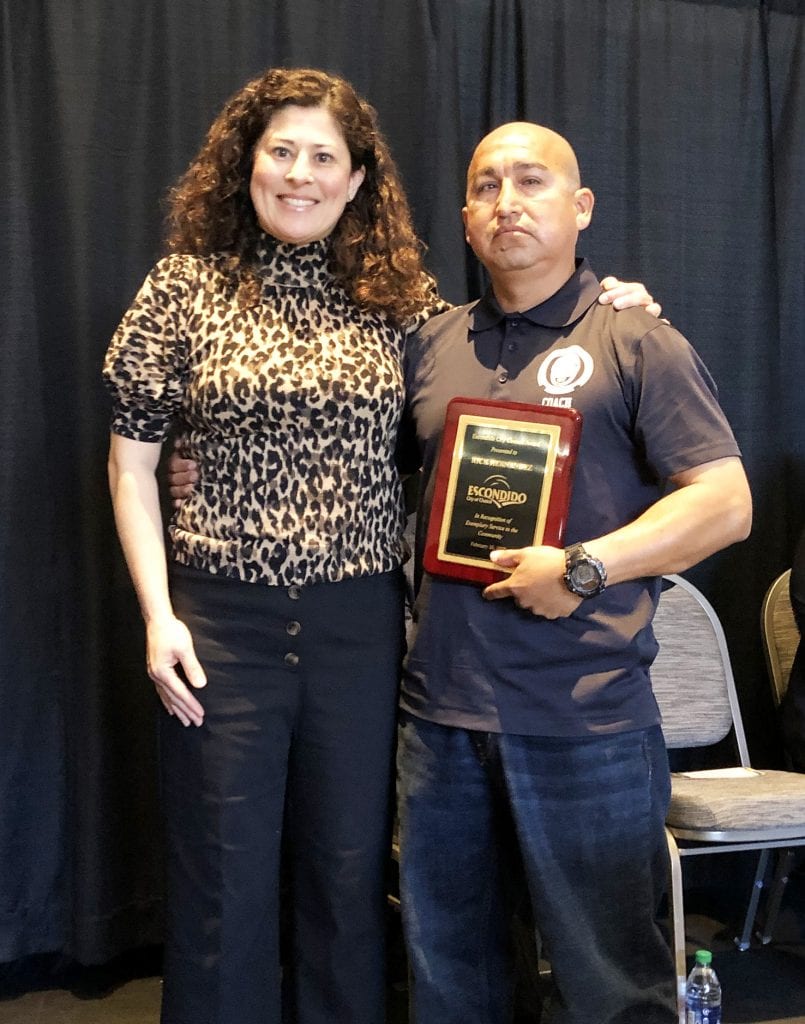 In addition, he volunteers with the Escondido Police Athletic League (PAL) program and was instrumental in helping to develop a boxing fitness program. The goal of the program is to help get troubled youth back on track and become productive members of the community.

With all this being said, Rick is visually impaired and as a result can’t drive. On many days Rick walks or takes the bus to get his kids to school and to perform his volunteer duties. Nothing slows Rick Hernandez down, and despite having a full-time job and responsibilities as a single parent of two talented, respectful, and successful children, Rick continues to give back to many children and families in Escondido through his volunteer service. Rick’s positive attitude and service have made a lasting impact on the community and are why I am honored to present to him this City Council Award for Exemplary Community Services. 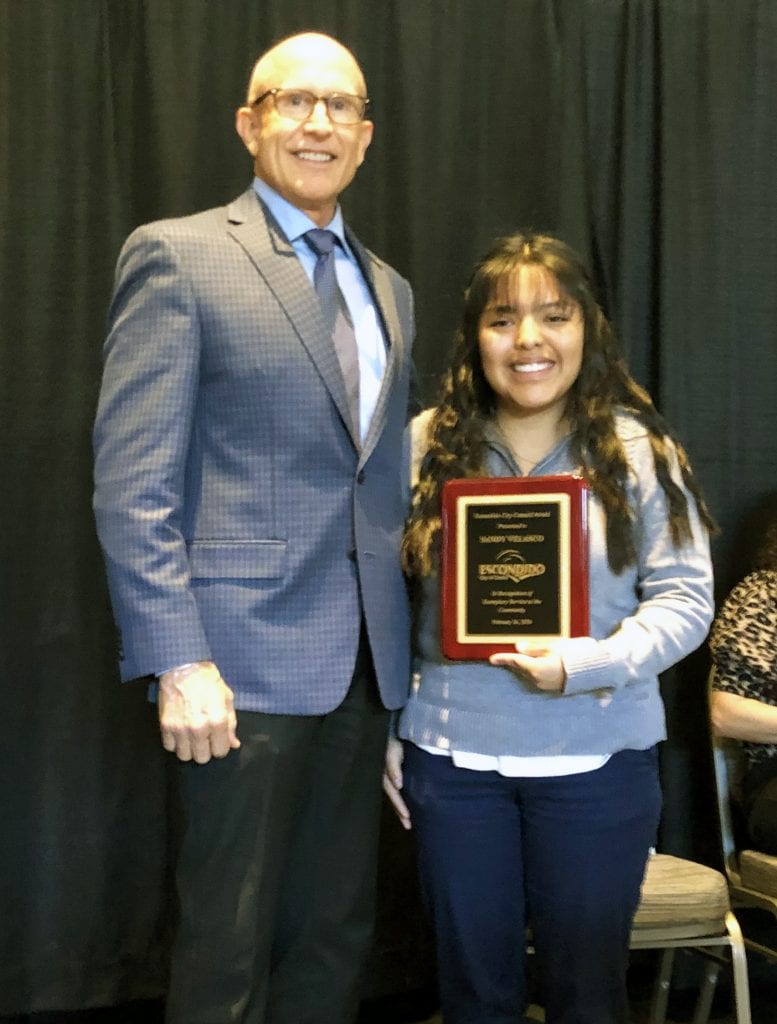 Sandy Velasco is a senior at Del Lago Academy and has been involved with Escondido Education COMPACT since she was in middle school.  As a great advocate for her community, she helped bring crosswalks to the Mission Park area and maintained the garden at Mission Middle School. She has shown outstanding dedication in many COMPACT programs as a member of Helping Hands since 2016 and Youth Leaders for Change (formerly known as CX3) since 2014. Sandy has actively participated in numerous service learning projects such as helping with cleanup efforts throughout the Escondido Creek, COMPACT’s annual Celebration of Peace event, hand-making rain ponchos for homeless in Escondido, organizing the annual Sr. Sr. Prom in coordination with City staff at the Park Avenue Community Center, and so much more.  She is also a Youth Court Attorney through the Escondido Police Department’s Juvenile Diversion Program and serves on the Youth Subcommittee of the North County Stakeholders Meeting. This coalition, organized by District Attorney Summer Stephan, is working on a media campaign aimed at educating parents and youth about the dangers of marijuana and vaping. 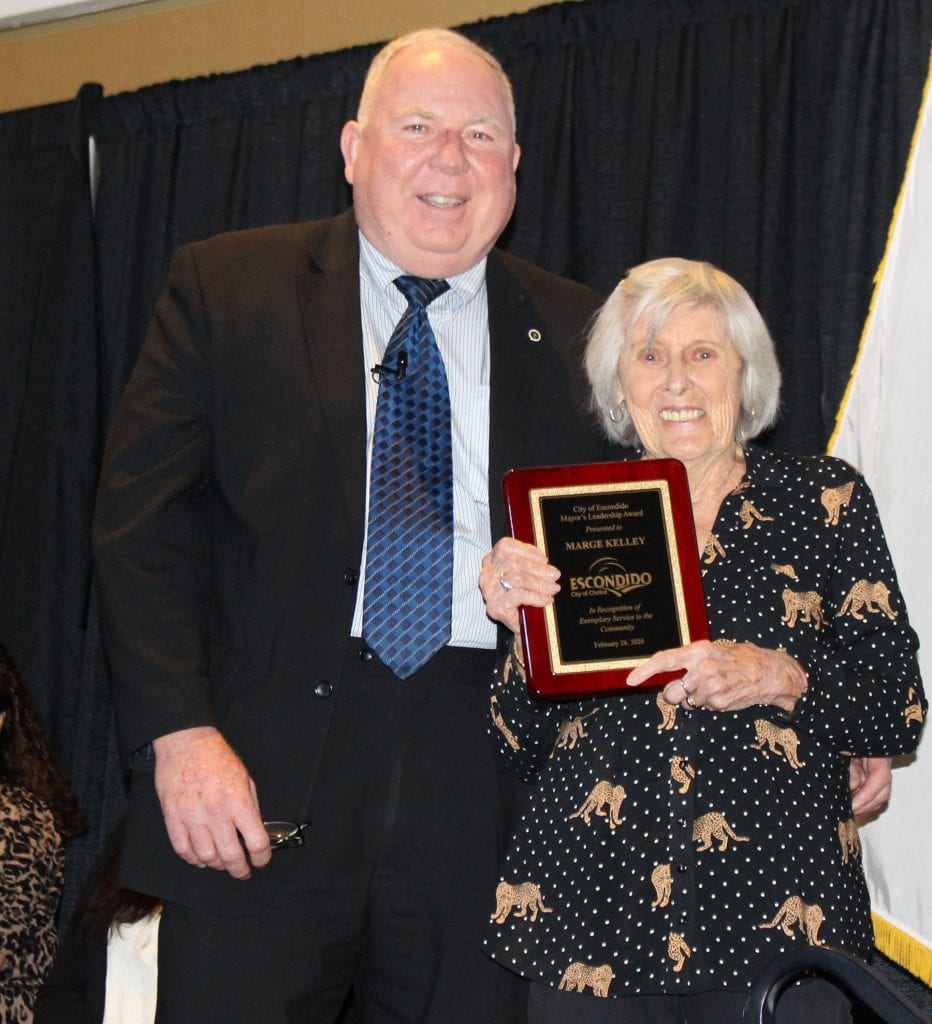 Marge Kelley is given Mayor’s Award for Exemplary Community Service by Mayor Paul McNamara for her longtime volunteer work with the Escondido Public Library.

Marge Kelley has volunteered with the Escondido Public Library since 1990 and has provided over 10,000 hours of volunteer services to our community. She began organizing the Friends of the Library Bookshop and served as the Bookshop manager for over 5 years. During this time, she coordinated the receiving and sorting of donated materials that were sold in the Bookshop in order to raise funds to support Library programming. She managed about 30 volunteer staff and ensured that everyone felt valued and appreciated during her time there. Marge has also been a Director on the Friends of the Library board since 2006, and contributes to decisions about how donation funds should be spent. Marge was the recipient of the 2019 Friends of the Library Volunteer of the Year award. Now in her 90’s, Marge can outwork and outwalk most of us, and Escondido is lucky to have such a dedicated and inspirational community member. Her warm, friendly, and energetic demeanor combined with her institutional knowledge and dedication to giving back to her community make Marge the perfect candidate for this year’s Mayor’s Award for Exemplary Community Service. 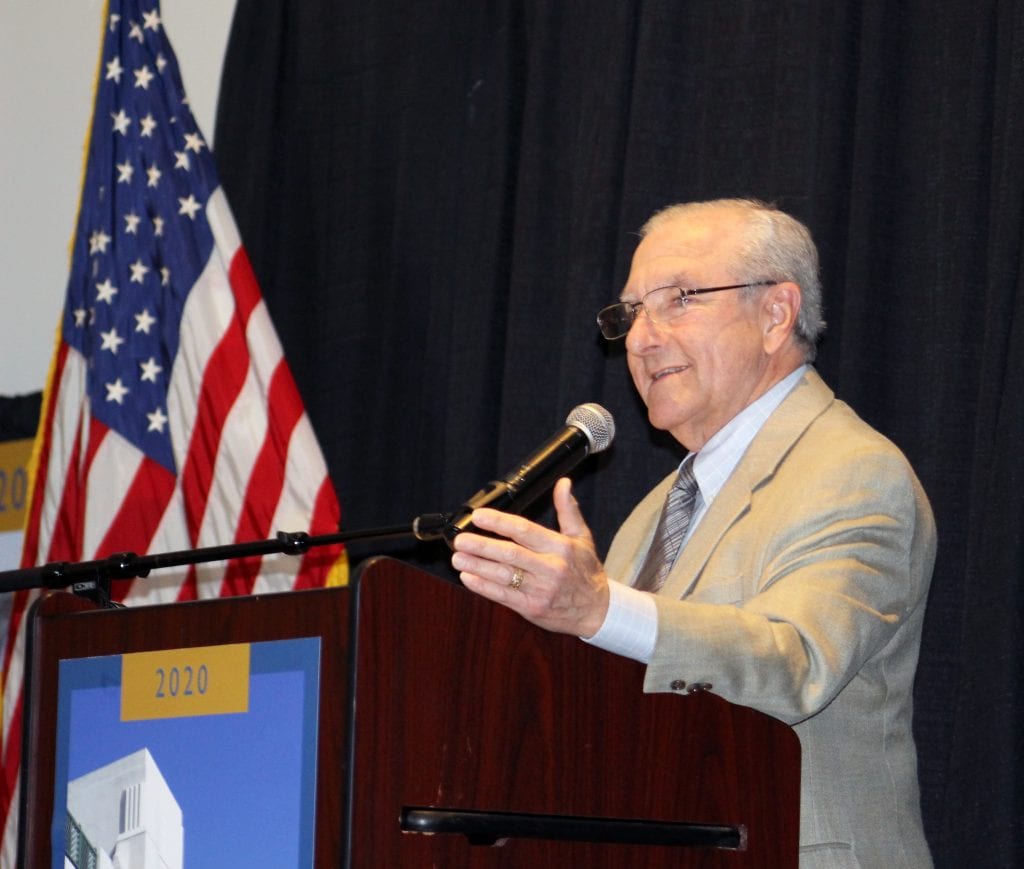 MC Irv Erdos welcoming attendees to the State of the City Address.

The phones are ringing for Steve Waldron: Cruisin’ is coming!Local firefighters to ask residents to ‘Fill the Boot’Escondido area veterans observe Memorial Day