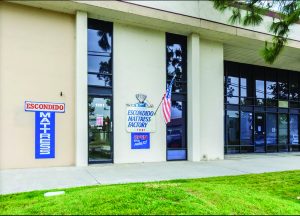 Photo of the Escondido Mattress Co., where there was a fire early Saturday morning.

On Saturday, April 1 at about 1:54 a.m. Escondido Police and Fire Dispatch Center received a report of smoke coming from the roof of a commercial building at 1365 Simpson Way.

A commercial fire response from the Escondido Fire Department was dispatched and arrived on scene to find smoke rising from the center of the roof in a one story commercial building, the site of the Escondido Mattress Factory.

Fire Department crews located the occupancy on fire at 1281 Simpson Way and forced entry into the structure. Upon entering the structure firefighters found heavy fire conditions in a business that produced mattresses. A Second Alarm was requested and units from San Marcos, Vista, and Rancho Santa Fe Fire Departments responded to assist with fire suppression efforts.

Twenty fire apparatus and over 40 firefighters worked for about one hour to contain the fire. Crews remained on scene throughout the night extinguishing smoldering materials. Two businesses adjacent to the fire occupancy were slightly damaged by smoke and fire.

No Firefighters or civilians were injured during the incident.

The cause and origin of the fire is currently being investigated by Escondido Fire Department’s Prevention Division.