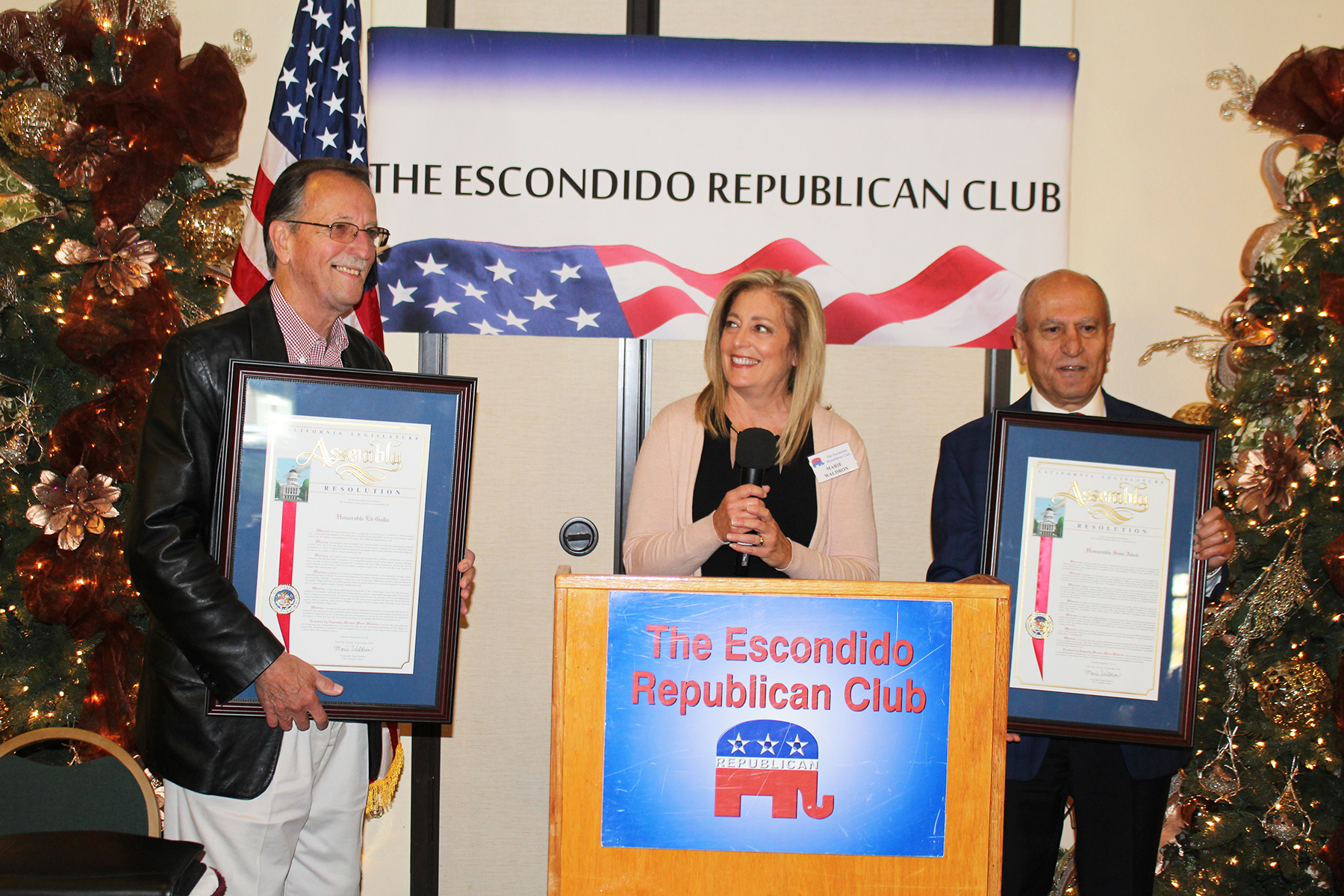 Ed Gallo (left) and Sam Abed (right) were honored for their service on the Escondido City Council by Assemblywoman Marie Waldron Monday afternoon at the monthly TERC meeting at Cocina del Charro.

Marie Waldron Monday paid tribute to men she served with for years on the Escondido City Council before she launched her own career as a state lawmaker in Sacramento where today she is Assembly minority leader. She presented former Mayor Sam Abed and former councilmember Ed Gallo with certificates acknowledging their many years of service during the monthly meeting of The Escondido Republican Club (TERC.)

Waldron of the 75th Assembly District is one of the most powerful Republicans in California, so it was definitely a big honor for her to drop by the club to honor Gallo and Abed, who were defeated for reelection in the November election.

The assemblywoman reminisced about serving with the two men, during the time that, as a team, right after the turn of the millennium, they helped the city recover from poor fiscal management where the city relied more and more on reserves, “and together we took the city into the black,” she said.

Waldron added, “These guys are a force to be reckoned with. They aren’t going anywhere.” She continued, “We’ve had great leadership on the city.”

Abed declared  “This election wasn’t about the candidates or policy. They registered eight thousand voters at the DMV and harvested their votes.” He predicted that under the new regime, “illegals are welcome and marijuana is welcome in our city.”

Greg Thomas, general manager of the Rincon Del Diablo Municipal Water District, which serves part of Escondido, gave a presentation to the TERC group on the history of the district, combined with a legislative update on Sacramento and how the changing political scene could impact local water prices and availability.

The City of Escondido incorporated in 1888. The Rincon water district formed in 1954. It is divided into five divisions, represented by a board of directors, including Dr. Greg Quist, David Drake, James Murtland, Erin Lump and Diana Towne. It also includes a fire department that formed in 1976, and which is today operated by the Escondido Fire Department; and a sewer district, which became active this year to serve the Harmony Grove Valley development. The district has 30,000 customers.

Thomas noted that statewide there was a 65% voter turnout of almost 12.8 million votes, out of 19.7 million registered voters. That compares to 42% turnout four years ago during the midterms. This means future ballot initiatives must secure signatures of 5% of this year’s turnout, so 620,439 signatures will be required to qualify for the 2020 election. A constitutional amendment initiative would require about 1 million signatures, up from 585,000.

Every statewide office was won by a Democrat, he said. In the Senate, there will be 29 Democrats, compared to 11 Republicans, giving them a “super-majority” enabling them to pass virtually anything they want without Republican cooperation.

In the Assembly, there will be 60 Democrats (54 are required for a “super-majority,”) and 20 Republicans. Club member and former Escondido city council member Marie Waldron is now Assembly Minority Leader.

The  Legislature will go into session on January 7. On January 10 the new governor, Gavin Newsom, will propose a budget.

The major takeaway of the 2018 election, said Thomas, is “California is a very blue state!” He added, “Two-thirds vote bills in the State Legislature will be more difficult to stop than in previous years. Majority vote bills will become nearly impossible to defeat.”

Efforts are already underway for the following ballot measures for 2020:

In Sacramento, the new governor’s policy priorities are expected to include:

Safe and affordable and balanced goals

The devastating wildfires of 2018 are expected to generate bills dealing with disaster relief, forestry issues, liability issues and a follow up to SB 901, a bill that requires additional state money be applied to state fire readiness and response.

Thomas told the TERC group, “Governor Brown was fiscally conservative, so was a good counterbalance to the spend, spend, spend legislature.  He actually vetoed many bills that carried huge price tags. We’ll have to see what Governor Newsom brings to table, though with his priorities of free everything, anticipate a sizable budget request, especially with the projected surplus.”

The water industry will promote taking some of the state’s $14.8B projected budget surplus to fund the Safe Drinking Water Trust Fund to pay for water in areas that can’t afford clean water, rather than the proposed tax on water and the proposed AB 401 that would provide low-income water rate assistance. “We feel the state should being doing that rather than taxing ratepayers,” said Thomas.

The industry, which includes such organizations as the Association of California Water Agencies, will fight the proposed AB 134, the water tax bill, proposing instead to take money from the state’s budget reserve and promoting a voluntary check-off on the IRS Form 540.

At the end of the meeting it was announced that the first speaker of the New Year for TERC will be the new mayor of Escondido, Paul McNamara—a Democrat!