was an Escondido native and longtime teacher 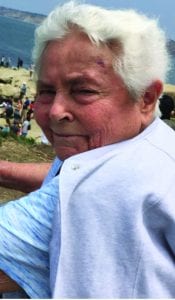 Marilyn Shriver was born on October 3, 1928, in Escondido, the daughter of John and Evangeline Shriver.  The family moved to Oregon as the country sank into the Great Depression.  She began her education in a Catholic school in Astoria in 1934.  In 1942, as World War II gripped the nation, her father entered the U.S. Army Air Corps as a flight instructor, and Marilyn was sent to live in Twin Oaks Valley, with her Grandmother.

She attended the Twin Oaks School, graduating in the last class before the old school closed.  She continued her schooling at Escondido High School on Hickory Street. Always enjoying athletics, she flourished and decided to become a teacher; graduating from San Diego State Collage and on graduation obtaining her teaching certificate.

Her first teaching assignment was at a youth Facility on Palomar Mountain, and soon after she joined the faculty at Escondido High in the athletic department.  When title IX of the Education Act was established Marilyn was a strong booster in its implementation at the school. She was very proud of her work and was honored as Coach of the Year.  She was an ardent cyclist and spent many summers touring with cyclists in France and she also crossed the United States with a group.  An accomplished artist she produced paintings of and for many of her friends in the local community.

Marilyn Shriver died on October 25, preceded in death by her father and mother, leaving only her brother James, and family.  Very close to her brother, who often lunched with her in Escondido, he was always impressed by her many friends (and former students) who stopped to express their appreciation for the leadership she had provided them.  She left her mark and is missed.