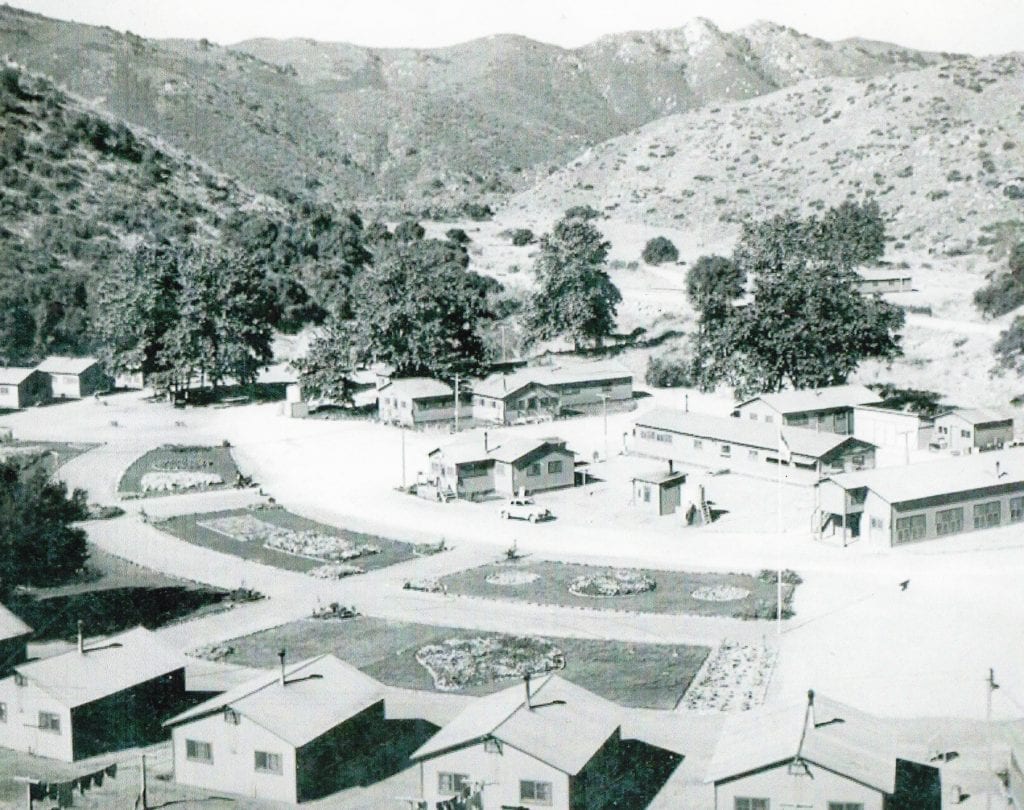 A 1942 aerial view of the San Quentin prison in Valley Center.

For years, San Quentin operated a minimum-security prison in Valley Center, a fact not widely known to most residents.  A major exhibition, with multiple photos and documentation, shows for the first time the scope of the local lock-up and why felons were moved from the main prison in northern California to San Diego County.

The exhibit opens Friday (February 7) at the Valley Center History Museum and will continue to the end of the year.  The display includes a number of official photos plus aerial photos from the collection of the Valley Center Historical Society.  Others were donated by an Escondido resident whose father was a civilian employee at the site, and from the Historic Route 395 Assn. Many have never before been made public.

Known officially as Moosa Prison Labor Camp #38, the facility was constructed in 1940 and attracted little attention from a Valley Center population that numbered less than 2,000.  The following year, some 70 convicts were moved from the main San Quentin complex to Valley Center. The 125-acre parcel had been leased from a local family by the State Dept. of Corrections.

The amazing but little-known story of the prison also involves the nation’s national defense and construction of a major roadway during World War II.

Prisoners were assigned to a work detail building a new road that would link San Diego naval yards to March Air Field to the north.  It was wartime, the coastal road was closed at sundown, and a dependable inland road was needed to transport men and machines.

Since prisoners had a choice of enjoying the sunshine and fresh air of Valley Center or the steel and rock walls of San Quentin, there was no known incident or escape.  On Sunday afternoons, baseball games were held involving local citizens and prisoners.  One of the photos on exhibit shows a game in progress.

On April 17, 1948, the local San Quentin convicts completed a realigned and modern roadway known today as Old Highway 395 which is the western boundary of Valley Center.

After the final segment of road was laid, the prison camp buildings were moved to another camp site.  The property, on a street with the present-day name of Nelson Way, sat vacant until the early 1960’s when a RV campground was established.  A 21-acre nursery later opened on the site.

Many of the photos in the collection were taken or collected in the 1940’s by the late Laurin Portis of Escondido, a civilian employee of Caltrans who worked as a rock mason alongside the prisoners.

The History Museum at 29200 Cole Grade Road is open Tuesday through Saturday from noon to 4 p.m.  Admission is free.  For more information, visit vchistory.org or call 760-749-2993.