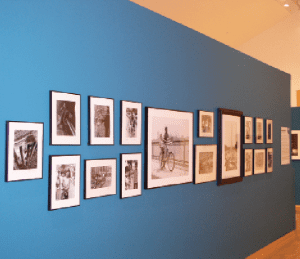 With a well attended opening night, September 29, the California Center for the Arts Escondido (CCAE) appears to be heading for a successful six weeks for the exhibition Photography Expanded: Distinct Approaches.

Twelve photographers, most of them from San Diego County, are represented.  A myriad of creative images is hanging on the walls of CCAE. Some images are from private collections; a handful of historic black/white images are lent to CCAE by San Diego Museum of Photographic Art.  The photographer’s use of the medium of photography is wide spanning and covers traditional to modern-manipulated.

CCAE has selected eighteen images by local photographer, Major Morris, 1921-2016, as representative for the traditional photography during the 1960s and 1970s.  The Center’s selection focuses on two aspects of Morris’ photography: His involvement in education and interaction with children, and his street photography of people and events during the 1960s.

Morris’s keen eye saw what his camera picked up.  CCAE selected his photograph “Gettin’ Along” for their brochure.  Morris took the photograph during a lunch break, taking a walk along Charles River (Boston, Massachusetts).  He saw the children on the bike, took the photograph, and a historic photo was generated.  The viewers’ own experiences from similar or other situations might stop them in front of this image, and make them reflect – on then and now.

Morris writes in his anthology “Escape from Black Bottom” about “Why no Career in Photography,” that he thinks he never pursued a career in photography “… because of the way [he] was raised.”  After dropping out of high school, he had to “get a job” and help support the family.  Photography and other artistic pursuits were considered “esoteric.”

However, he liked photography and as an adult he always carried a camera.  Morris states that “…it was the biggest shock in the world to me when Gordon Parks came on the scene and I found out about him.”  The fact that Gordon Parks could make a living from working with what he loved amazed Morris.

Viewers at the CCAE exhibition are in for a treat of visual impressions, and when they stop in front of Major Morris’s photographs, they might ponder what might have happened in his life had he been able to follow his “innate abilities” without obstacles. He took amazing and extremely meaningful photographs with the possibilities he was given.