Commissioner of Baseball Rob Manfred led the dedication of the new diamond.

Major League Baseball Commis­sioner Rob Manfred stood on the in­field of a brand-new artificial surface and looked out on a beautiful, sunny afternoon at the kids and parents who came out Saturday, July 9 for the re­dedication of the Conrad Prebys Branch of the Boys & Girls Clubs of Greater San Diego, located at 115 Woodward Avenue.

“Here at this wonderful place, the Padres and Major League Baseball donated over $350,000 to give kids an opportunity to play at a facility that’s safe for them each and every day,” he said. “Maybe this facility will pro­duce another great Boys & Girls Club alumnus, like Frank Robinson or Ken Griffey Jr., who’s going to be induct­ed into the Hall of Fame in just a few weeks. I know, however, that this club will play a major role in producing the next generation of people who share great American values.”

It was his second of four such field dedications as part of a whirlwind tour. Commissioner Manfred, who had just arrived in San Diego earlier in the morning, was 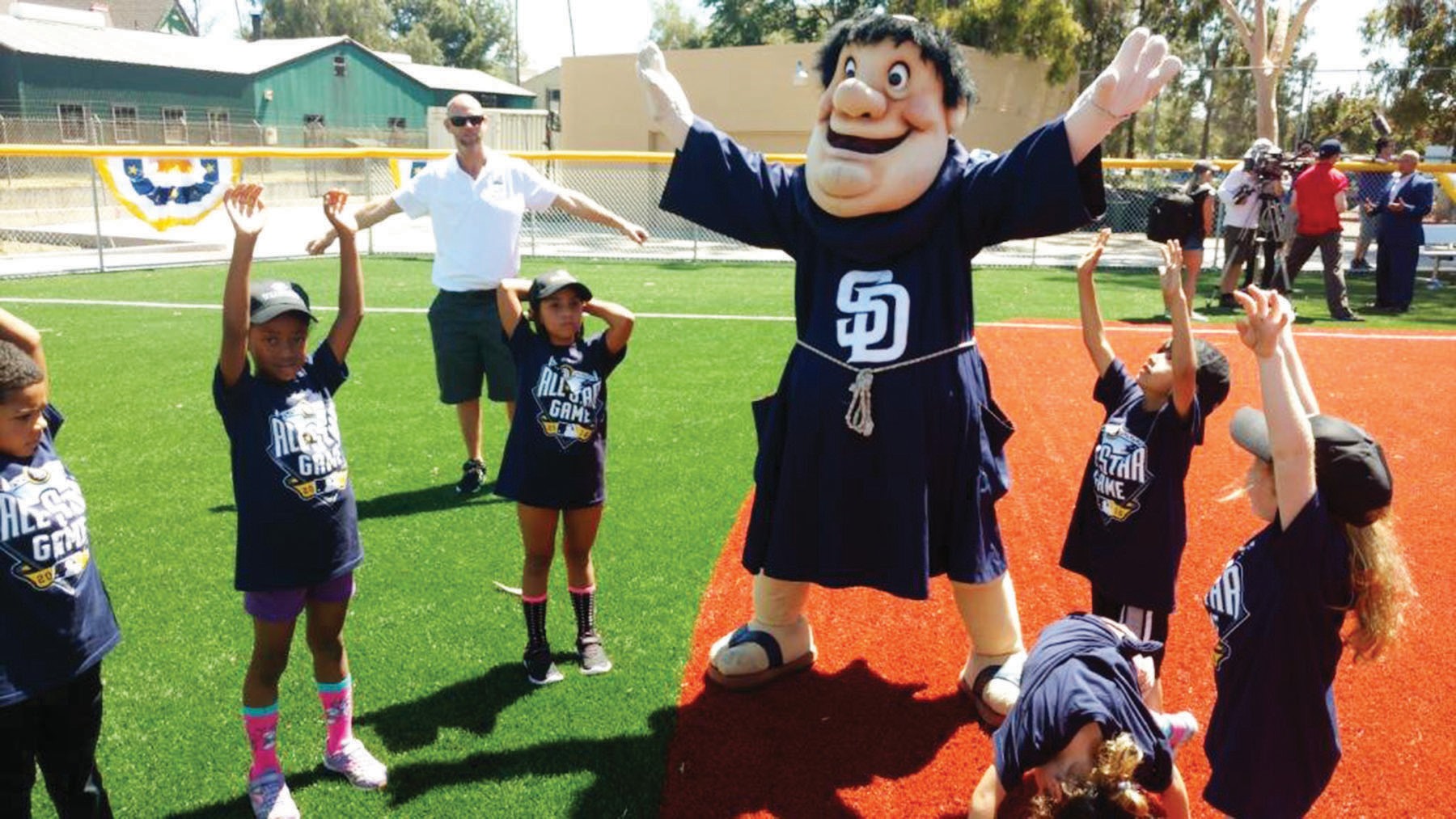 asked after the event about the blitz pace of his personal community-appearance schedule to promote his “Play Ball” initiative to new crowds.

“You have to do as much as possible while you’re here,” he said. “You’ve got to make the most of it.”

This site was chosen by MLB as a 2016 All-Star Community Legacy project. An existing parking lot and green space has been transformed into a multi-purpose baseball diamond complete with manual scoreboard, moveable fences and a large shade structure.

For a special touch at this one, 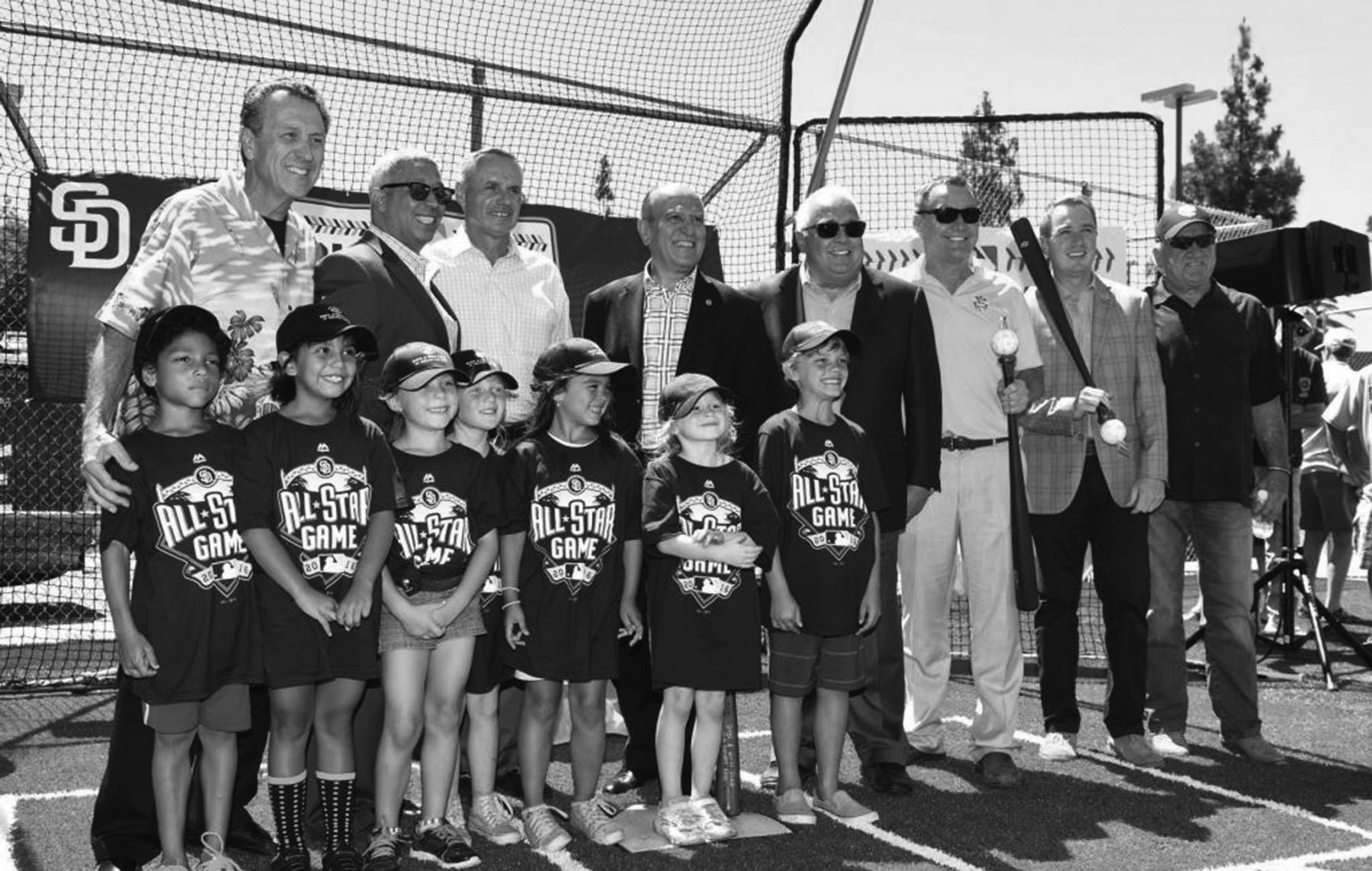 sev­eral boys and girls from the local T- ball organization stood near the dais, each holding a baseball bat that had been signed — usually just a first name — by the children at the facility. The Commissioner went over and was handed the first one.

“The All-Star Game is one of the great events of the summer. It pro­vides an opportunity for Major League Baseball to interact with communi­ties,” Manfred said. “Here in San Di­ego, we’ll leave behind legacy proj­ects, with the help of the Padres, worth over $5 million. Since 1997, when the legacy program began, MLB during its All-Star events has donated over $75 million worth of goods and services.

“Youth is a special focus of this year’s All-Star Game. We’ve expand­ed our All-Star offering to include two new and exciting events. Right down by Petco Park, we have the Play Ball Park for the first time ever. It will be­come a regular part of the All-Star Game program from here on out. And just yesterday, the first edition of the Jr. Home Run 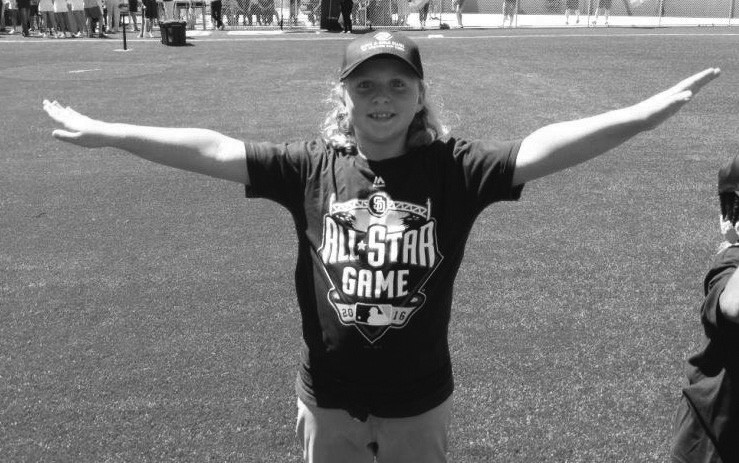 A member of the Conrad Prebys Branch of the Boys & Girls Clubs of Greater San Diego T-Ball club.

At the Conrad Prebys Branch, fund­ing has repurposed an existing parking lot and green space into a multipurpose baseball diamond complete with mov­able fences and a large shade structure. The field will be used for both T-ball and casual baseball and softball play­ing activities that MLB has been pro­moting through Play Ball.

“The backbone of our youth initia­tives is providing kids with places to play our game,” Manfred said. “In the last five years, during All-Star Game events, we have built and restored 27 fields. Five additional fields will be added to that list here in San Diego, and we’re very proud of that accom­plishment.

“Of all our initiatives in Major League Baseball, the Play Ball initia­tive is really the most important. The goal is to get young kids engaged with our game — formal play, informal play — in a safe environment so that we can pass the values of baseball onto the next generation.”

Mark Newman is enterprise editor of MLB.com. Read and join other baseball fans on his MLB.com community blog.