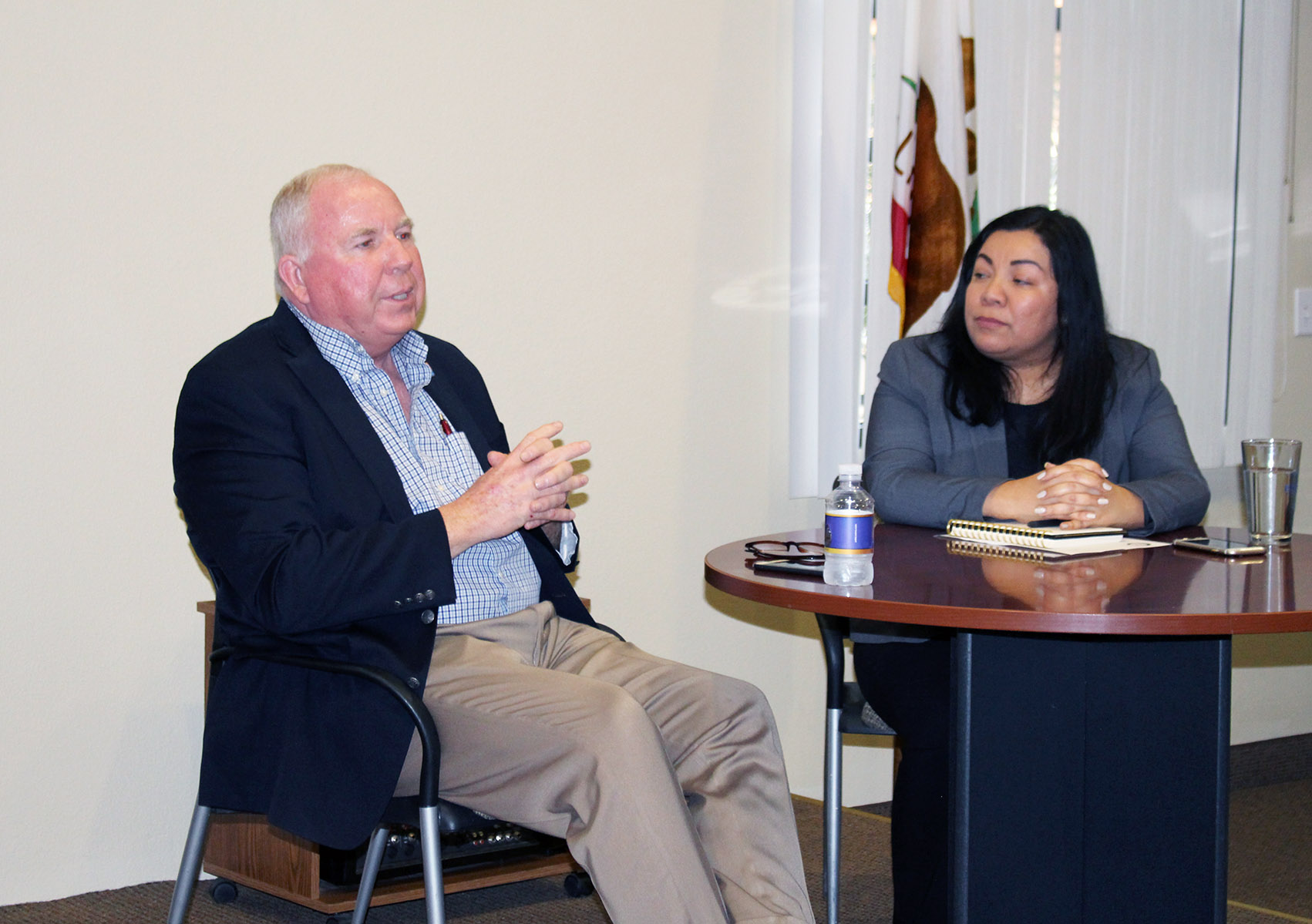 Living up to his promise to go anywhere and talk to any group that will invite him, newly inaugurated Escondido Mayor Paul “Mac” McNamara—accompanied by newly minted Councilmember and Deputy Mayor Consuelo Martinez—Tuesday afternoon appeared before the Chamber of Commerce’s Governmental Affairs Committee to talk about how they plan to lead the city to “the next level.”

Theirs was a conciliatory and soothing message of the need for partnerships, inclusion, transparency and no abrupt, sudden lurches in any direction. Also, a message without a markedly anti-development bias.

One idea they are toying with is changing the times of the city council meetings to make them more accessible to the public that works 9-5.

McNamara and Martinez were introduced by this year’s chairman of the governmental affairs committee, Christine Antoine.

The committee consisted of a wide section of the business community, schools, and several governmental organizations. With probably half attending part of the building industry.  According to the Chamber of Commerce, its Government Affairs Committee “works to create and sustain a favorable business environment in which all businesses can grow and prosper through the monitoring of legislation and influencing of governmental decisions on behalf of the interests of our members.”

“I’m of the opinion that we need a strong business community if we are going to do anything in this city,” said McNamara. “We need a holistic approach to reaching the next level.”  This will require a combination of “partnerships, transparency and dialogue,” he said.

As part of this this dialogue he wants to appoint is a “Mayor’s Round Table Commission” to tackle the city’s problems “from economic development to the homeless, with education in between,” with a variety of viewpoints “to reach the next level.”

“You can’t fix just one thing without working on all of it,” he said. “We have to strengthen our partnerships.” Sometimes that means admitting the city should not always be the leader in a certain area when another group has better expertise. “Sometimes it should be a facilitator,” he said.

A “bible” in this process will be the city’s CEDS (Comprehensive Economic Development Strategy) which, “talks about where the city should go economically,” said McNamara.

Note: This document can be found on the city website: www.escondido.org/Data/Sites/1/media/PDFs/CMOffice/Attachmenttostaffreport-Updated2017CEDS_v2.pdf

The first CEDS was completed in 2012 and a comprehensive update was done in 2017. It “reflects a thorough re-assessment of local and regional economic conditions; extensive input from private and public stakeholders; and a revisiting of priorities regarding the City’s potential development related infrastructure investments.”

Closely studying this document has been part of McNamara’s homework. The city has a choice between trying to bring in a completely new industry, such as biotechnology, as opposed to “strengthening the industries we already have,” such as agriculture, he said.

The CEDS document indicates strong polling support (80%) from the 36 members of the CEDS committee for further developing agribusiness and ag-tech. Other types of business development that got even higher support included culture, entertainment and tourism and specialty foods and beverages. 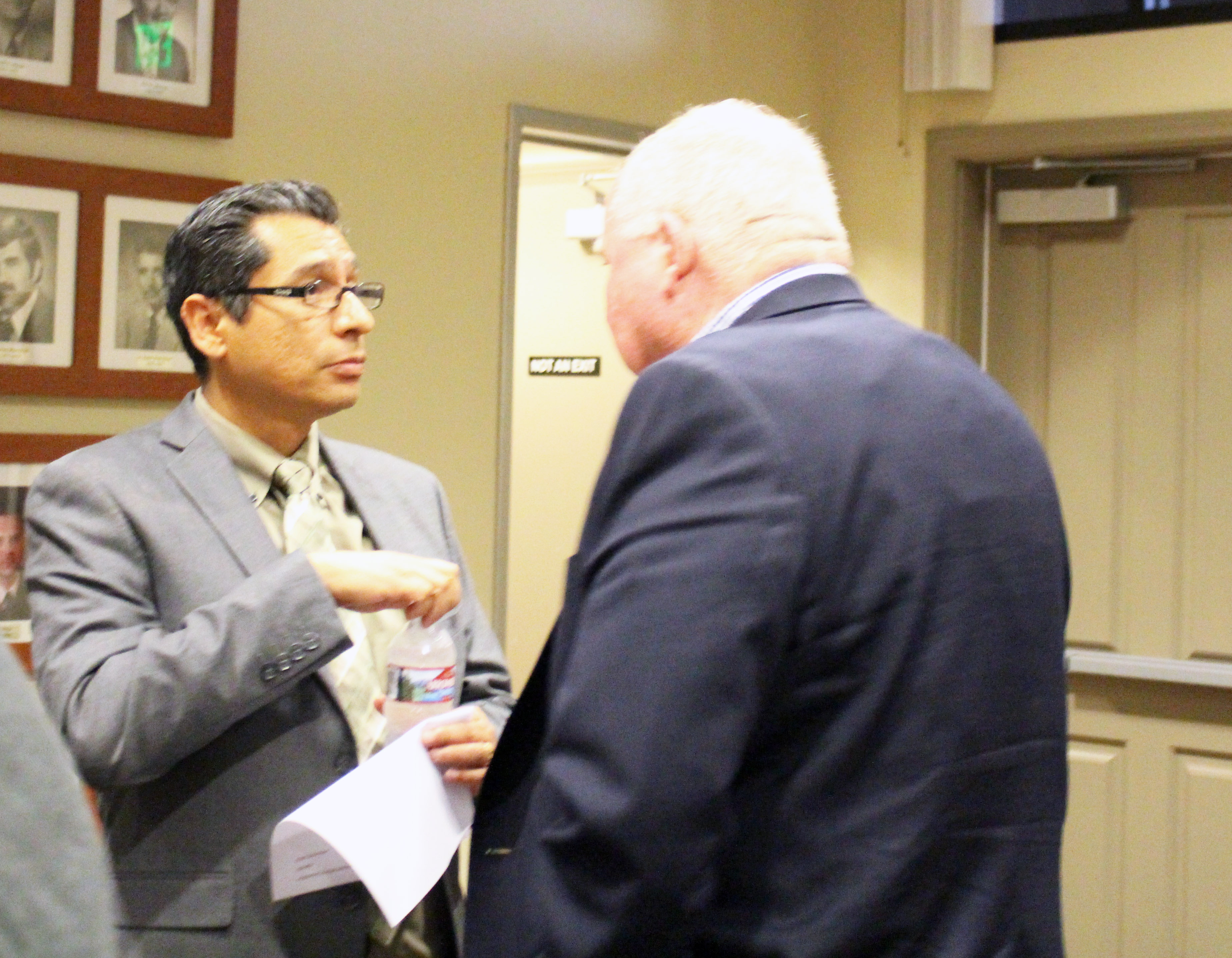 Noting that he came to the task after several years on the Palomar College board, McNamara said one type of industry that could be fostered is vertical farming, which is something the college’s president, Joi Lin Blake, has expressed an interest in expanding as part of the curriculum.

Vertical farming is the growing of produce indoors in vertically stacked layers. It uses skyscraper-like designs and precision ag methods to grow food without soil or direct sunlight. This could take advantage of the fact that Escondido High School has one of the largest FFA (Future Farmers of America) organizations in San Diego County, he said.

“That could lead to having UC Davis open an extension in Escondido,” said McNamara. “We are looking at what are we doing now and what can we expand on and what can lead to other industries? It is harder to, say, bring biotech here to Escondido.”

He continued, “I’m not saying ‘no’ to anything, but we need feedback from all of our stakeholders.”

That is how he approaches the Safari Highlands development proposal, which calls for annexing territory near San Pasqual Valley and the Safari Park to build 551 residential units on 1,098 acres. “I want an award-winning Safari Highlands, with net-zero housing and where all the houses have solar—with drought-tolerant plants with all the bells and whistles,” he said.

Regarding development, McNamara said, “We know that every time we build something, we are putting another car on the road.” As a member of the San Diego Association of Governments (SANDAG) board, he noted they are confronted with the question, “What’s the solution? More highways or more smart cars?”

He recalled that when he moved to Escondido more than twenty years ago that what drew him were amenities such as the California Center for the Arts and the parks. “I fell in love with it. We would like to grow a city that will make others say, ‘Why would you not want to live here?’ We are running out of land for development—so we need to be very smart about what we do.”

Next, Deputy Mayor Consuelo Martinez spoke. “I bring a different perspective to the council because I have never run a business and I’m a renter,” she said.  I’m one of two city council members who grew up here.  I have spent most of my life in District One.” 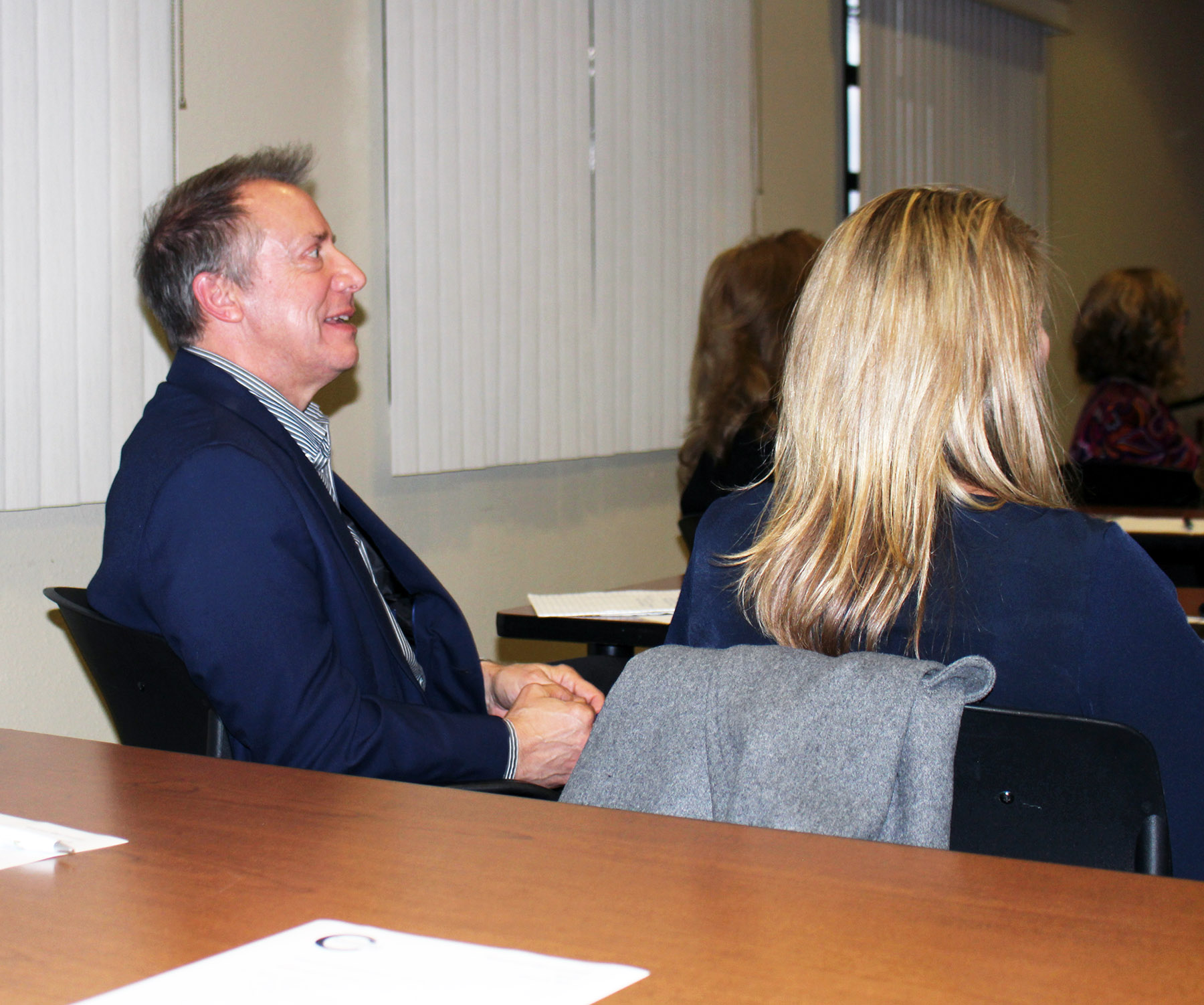 She attended elementary and high school in Escondido and originally wanted to be an entrepreneur, and had attended Escondido High School’s business academy, but she ended up working first as a teller at Bank of America at the age of 16, attended Palomar Community College for two years and then to Cal State San Marcos where she earned a degree in Political Science and Women’s Studies.  For a time, she explored becoming a public interest attorney but the potential for so much college debt was off-putting.

“I believe people should be more involved in their neighborhoods. Residents of communities are the real experts about what is needed,” she said. “I ran for city council because I wanted to represent the perspective of my community.” She said she supports the revitalization of Grand Avenue, “but I want the East City revitalized too.” She wants to partner with the Chamber of Commerce “so you can educate me about business.”

When she was campaigning, she spoke to many merchants who said how hard it had been for them to open a business in the city. “Many of them talked about the challenges they faced,” she said, adding, “How many more people like that are there who maybe didn’t open a business because of those challenges?”

She said she wants to have a “strong relationship with small businesses,” adding, “relationships are everything, folks. I’m a leader. I listen and I’m open to learning.”

The duo took questions from the audience. The first concerned the future of the previously announced intention to sell the city’s Parking Lot #1 to Touchstone Communities. That vote last summer whipped up opposition from the business community, led by Filippi’s Pizza Grotto—whose owner said he’d have to close his restaurant if the sale actually goes through.

“Mac” was noncommittal on this—saying he had just been briefed by staff. The current status is that no decision has yet been made. He supports a strategy for “infill,” i.e. converting other uses into residential housing to increase downtown density. The logic is to create more customers for the downtown merchants.

A member of the audience warned against “destroying the charm” of the Grand Avenue district by creating too many multi-story buildings.  She predicted this would draw “drunks” into sleeping on the sidewalks.

Martinez said this is a major topic on social media, which she monitors. She said she had also read several articles about it in The Times-Advocate. “It’s very controversial,” she said. “I’m a supporter of infill.” She supports encouraging owners of vacant lots and vacant buildings to utilize them. “I’d like to find out what incentives we can give the owners to sell or doing something with those properties,” she said.

Attending with McNamara and Martinez to provide staff support was Deputy City Manager Jay Petrek and Economic Development Manager Michelle Geller. Petrek confirmed that no final decision has been made on Parking Lot #1.

McNamara said, “One of the challenges and one of our goals is the development of Grand Avenue. It could become the Gaslamp of North County.” He added that many people are critical that not much happens on Grand Avenue at night, “and that they roll up the streets after sunset.”

He continued, “I think we can all agree that we can do better. There are various options as to what we should do. We are both of the opinion that it requires a lot of dialogue with the community.

One audience member observed, “Parking structures are expensive. We are all used to parking for free. If you don’t mind walking a couple of blocks there is parking.”

Audience member Ray Register asked if there was any interest in annexing the Harmony Grove community.

McNamara replied, “There is discussion about annexations of various ‘islands’ in the city but there are costs associated with that.”

Another question asked when the city might extend Citracado Parkway from West Valley Parkway to Andreasen Drive,  to connect with the rest of the city—which is also a desire of the Palomar Health System. McNamara said that was certainly desirable, and it would reduce some of the traffic. “City staff are at work on it,” he said.

Another question asked when Stone Brewery’s previously announced hotel would be built. “It’s still in the works,” said the mayor.

Petrek explained that Stone must work out the details with the owners of the Escondido Research & Technology Center (ERTC), a 164-acre technology park that includes the 550-megawatt Palomar Energy Plant, Stone Brewing Company and Palomar Medical Center. “They still want to do it. It involves conforming to the park’s CC&R’s. It’s a matter of negotiating the details,” he said.

Towards the end of the hour-long meeting, McNamara pledged to “come to any of your meetings, just invite me,” and extended that to any organization in town that wants to host him. He added that he will also do a monthly “Mayor’s Meeting,” at various locations. These meetings and times and locations will be announced on the city website.

Martinez similarly said she is available, although because she works part-time at CAN she is usually more available in the mornings.

Both said they favored at least talking about changing the times of the city council meetings, which currently begin at 4:30 p.m. at City Hall on Wednesdays. “The idea would be more accommodating to people who are just getting off from work,” she said.