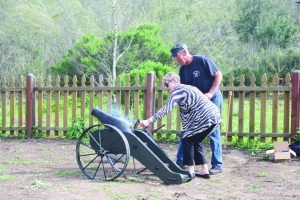 A “Demonstration Kaboom” of a cannon lost for decades and only recovered recently was held at Sikes Adobe, Escondido, on Saturday, March 4, 1 p.m.

The cannon was originally a gift to the city of San Diego by San Diego pioneer and ‘City Father’ William Augustus Begole. He came west in 1849 and to San Diego in 1869. One of Begole’s gifts to the city – for San Diego’s BIG celebration of the 1876 American Centennial on July 4th — was a cannon. The cannon was recently recovered by SOHO (Save Our Heritage Organization) and restored by Escondido’s Bandy Blacksmiths at the Escondido History Center.

On Saturday, these organizations hosted a talk about the cannon’s recovery and restoration followed by a demonstration shoot at the Sikes Abobe, which is an historical farmstead in the San Dieguito River Park in Escondido.

About 40 people attended. Dr. Lael Montgomery of Valley Center, who has written a biography of Begole, did a PowerPoint on his life. She told The Times-Advocate: “The restoration story was fascinating. It’s incredible that those guys could bring back what was basically a cannon barrel full of packed dirt and cement to a functioning noisemaker!” 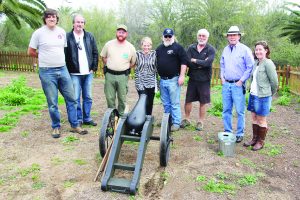 1876 cannon fires again Gathering at the Sikes Adobe in Escondido on Saturday, March 4, 2017 to celebrate the recent restoration of the San Diego 1876 Centennial Cannon are history enthusiasts and a few of the people responsible for its recovery and restoration. From left: James Thayer, Bandy Blacksmith Guild, Blacksmith and Artillerist who presented the story of the cannon’s restoration; Kerry Watts, history enthusiast, Valley Center; David Vidal, Interpretive Ranger, San Dieguito River Park; Lael Montgomery, who is a cousin of the cannon’s originator, San Diego 1869 Pioneer William Augustus Begole, has recently published his biography and presented his story; Earl Brown and Richard Thorpe, both of the Bandy Blacksmith Guild, the artisans who restored the cannon; and Bruce Coons, Executive Director, and Amie Hayes, both of Save Our Heritage Organisation (SOHO). SOHO recovered the cannon and organized its restoration. Photos by Jonathan Vick

William Augustus Begole stepped from the side-wheel steamer S.S. Senator onto Horton’s Wharf  in “New Town” San Diego on September 24, 1869. For the next thirty-two years he worked to shape the city’s governance, politics, civic institutions and fraternal life.

His story was lost to history when his first cousin (four generations removed), Lael Montgomery of Valley Center, re-discovered him accidently. She has spent the last five years researching, writing and publishing the tale. Coincidently, SOHO recovered his Centennial Cannon in the middle of Montgomery’s research project. The cannon’s restoration was completed by the Bandy Blacksmiths of Escondido through a gift from Begole family members, Dr. Montgomery and her cousins, Lani Sevelle and Diny Peterson.

William Augustus Begole is also a cousin of Robert Begole, benefactor of the Begole Archeological Center in Borrego Springs. 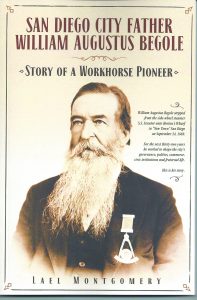 The book cover for the biography of William Augustus Begole.

The book, “San Diego City Father William August Begole—Story of a Workhorse Pioneer” is available on Amazon. The cannon will live permanently at Whaley House, San Diego, and will be fired, as it was in the past, to celebrate city events.