Looking back on an eventful 2022 in Escondido

The news that the Escondido Stater Brothers is going to close was our biggest story of the year.

Welcome to the week in between Christmas and New Year’s, when it’s in one year and out the other. Each year at this time we review the most popular stories, as indicated by hits on times-advocate.com. As these stories were picked by the readership, I dedicate this list to them!

Believe it or not, the most popular story this year was: “Stater Brothers store to close.” There’s obviously more to the store than just that simple fact, and we have contacted Stater Brothers corporate headquarters and public relations department to see if we can find out some more. Like what might replace the market at that location?

For the online story, visit: www.times-advocate.com/articles/stater-brothers-store-to-close/

The second most popular story in the TA online this year was “Costco coming to Westfield Mall,” which we published June 26. It reported that “The Escondido City Council at a special meeting on Monday will vote on a resolution that will renew the existing lease with Westfield/ North County Shopping Center and lease land to Costco for a new center at the city land, which is located at the southern edge of the city.” Costco will be built on the former site of Sears, which for many years was one of the anchor stores of the mall.

You can find the story here: www.times-advocate.com/articles/costco-coming-to-westfield-mall/

The third most popular story online this year was “Four teens arrested for murder” which we ran last week (December 24) and which started off: “On December 11th, 2022, at around 5:45pm, numerous 911 calls were received by the Escondido Police Dispatch Center reporting gunshots heard in the area of the flood control channel at Hickory St. A 16-year-old victim was found in the flood control channel. The victim was transported to the hospital and unfortunately was pronounced dead around 6:45 pm.” It continued, “On December 22nd, 2022, a 17-year-old male, two 15-year-old males and a 15-year-old female were arrested and charged with murder. All four juveniles are currently in custody. The suspects are all Escondido residents. The murder was gang related. The victim had no affiliation with any gangs.”

You can find the story here: www.times-advocate.com/articles/four-teens-arrested-for-murder/

This story was read and quickly shared across the globe with tens of thousands of views just the first day of posting.

Escondido residents are very fond of their food establishments, so the opening of a new breakfast and lunch venue is always a story of high interest. That was very true of “Huckleberry’s to open in Escondido next month,” which we ran on March 3. The restaurant, which “brings Southern Cooking with a California twist,” did indeed open and has proven very popular those who like their breakfasts southern. See the whole story here: www.times-advocate.com/articles/huckleberrys-to-open-in-escondido-next-month/

The fifth most popular story in the TA was “Founders of Our Faith: Kathryn Kuhlman” which was written by Rob Granger, author of the Churches, Words of Faith weekly column. The story can be found here: www.times-advocate.com/articles/founders-of-our-faith-kathryn-kuhlman/

Number six in our hit parade of popular online articles is “Property once proposed for huge project bought by Golden Door spa that opposed it.” The story noted: “The land formerly known as Newland Sierra, and Merriam Mountains, where county voters two years ago defeated an effort to build a huge development of 2,100 homes between I-15, Deer Springs Road and Hwy 78, has been taken out of play permanently. It will become protected, preserving open space, wildlife and habitat areas. Golden Door Spa, which led the fight against any development in the area, purchased the 1,900 acre property.”

The 7th most popular story on The Times-Advocate website this year was “Ashley Williams sentenced 25 years to life,” which ran June 30. Williams was convicted of the deaths of four pedestrians, including two children, in a car accident that happened May 5, 2020, on San Pasqual Valley Road at Oak Hill Drive.

The 8th most popular story on The Times-Advocate website in 2022 was “Sheriff seek 2 attempted murder suspects” which was published May 13. This story followed the stabbing of a 15 year old, in which two suspects were sought by the San Marcos Sheriff’s Station.  Find the story here: www.times-advocate.com/articles/sheriff-seek-2-attempted-murder-suspects/

The ninth most popular story for 2022 was “Delight of France is moving” which appeared on August 25. It reported on the plans by the owners of the popular French bakery restaurant to move to a new, two-story location also on Grand Avenue, next to O’Sullivan’s.  One of the owners told us: “We’ve outgrown this location.” Read the whole story here: www.times-advocate.com/articles/delight-of-france-is-moving/ 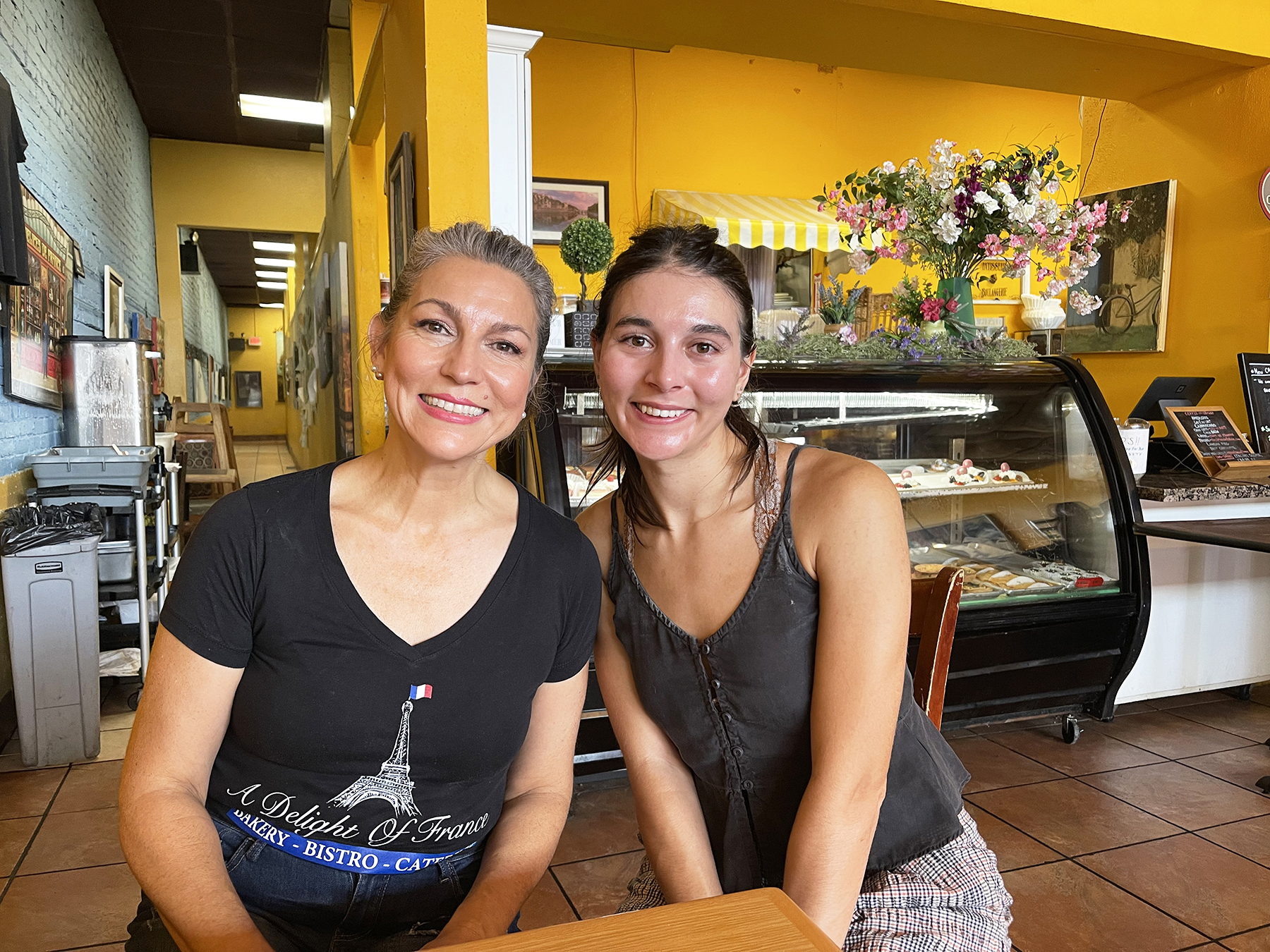 The mother-daughter team of Alberta Agyan and Grace Hall of the Delight of France bakery, which is relocating on Grand Avenue.

The 10th most popular story was one that sparked the most national interest: “CCAE leadership to remove controversial cops as pigs painting.” That headline turned out to be erroneous, as the board of the California Center for the Arts, Escondido, vacillated and issued conflicting statements as to what it was going to do about the most controversial piece in the Street Legacy: SoCal Style Masters exhibit. Ultimately it kept the painting where it was and, also something of a surprise, the Street Legacy exhibit turned out to be one of the most popular in the museum’s history.

The most popular stories after that included:

“Suspect in domestic violence dies in motorcycle collision” (My 23)