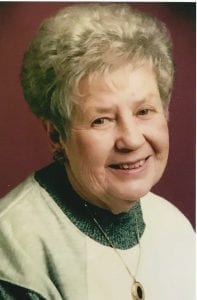 Lola Luella (Harden) Patton of Poulsbo, Washington, passed away on November 20 at the age of 95.

She is also survived by her dearest friend Lillis Gallo of Walla Walla. True friends of 70 years, remaining in touch into their 90’s.  Speaking on the phone frequently, they called each other “Lil” and “LoLo.” Friends through hard times and happy times creating memories, and setting an example of true friendship. Lola was born on August 9, 1922 in Elmont, Kansas, and grew up in Kansas with her seven siblings.  She attended Shawnee County Schools, graduating from Rossville High School and later enrolled in nursing school in Topeka.

On January 6, 1941, Lola married her husband, Chester. After starting their family, they moved to Walla Walla.  She began her career in the bakery business at the Delishus Bake Shop owned by the Frank Family.

Moving to California she worked at Wedeking’s Bakery in Escondido where she became well known for her strawberry pie. Upon her husband’s passing she moved to West Hartford, Connecticut to live with her daughter and family. She worked at Conard High School cafeteria where she continued her love of baking and decorating cakes. After moving to Poulsbo, Washington she began working/volunteering at the Poulsbo Chamber of commerce.  In 2004 she was given the outstanding volunteer award by the chamber.  She continued working there until age 85. Her laughter and smiles will be missed forever.

Mrs. Patton will be laid to rest with her husband Chester at Rosehill Memorial Park, Rocky Hill, Conn. Graveside services will be held at the convenience of family.  Memorial donations to St. Jude’s Children’s Research Hospital at www.stjude.org or Make a Wish Foundation 1-800-722-9474 or online at wish.org.