Locals get the scoop on proposed Lilac Hills Ranch development 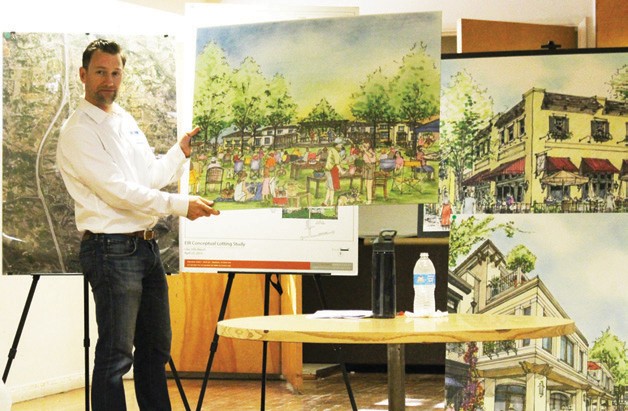 “I think this is going to be the best community in California ever built,” Jon Rilling told an audience of VC residents who showed up to learn about Lilac Hills Ranch.

About 20 local residents, including several members of the Valley Center Community Planning Group, attended lunch and got information on the proposed Lilac Hills Ranch development at the VC Chamber of Commerce’s Lunch & Learn program on January 14 at VC Community Hall.

The program was given by Rilling, project manager for the 1,746-unit development that is proposed one mile south of the intersection of I-15 and Hwy 76, and Cassandra Costa.

Rilling talked about the strong, growing San Diego economy, which, he said, is being driven by the biotech industry that many feel will one day make the region into the Silicon Valley of biotech. He noted that the area has added 43,000 jobs in recent years and that the population will continue to increase “as we live longer and have more kids.” The building industry has not kept up with this demand he said. Hence the need for projects such as Lilac Hills Ranch.

The project has several goals in mind, among them to create a development that will support business as well as a green lifestyle. Because so-called “Smart Growth” is an underlying philosophy of regional government, the Accretive Group selected a location that was near to a freeway, one half mile from I-15. Smart Growth mandates that homes be near infrastructure and shopping. Developments that provide such things are called mixed growth developments. They provide a place to live, work, play and learn, with all of the homes within a ten minute walk of a community center, neighborhood center or retail shops.

“It’s very rare to have such a thing unless you live in an urban environment,” said Rilling, who noted that the idea is to promote a healthy lifestyle by encouraging walking.

The project will also have what Rilling described as “more parks than I’ve seen anyone have before.” These include both neighborhood and community parks, plus trails that will crisscross the development and provide a way for children to safely walk back and forth to school. Besides three main community centers, there will be community pools, a vineyard (they hope) and 50 acres of farmland incorporated into the perimeter of the project from the total of 400 that is currently in farming.

There will also be sidewalk dining, public community centers and passive parks, all incorporated into a mixed-use

The Times-Advocate community that will create a unique social fabric, says Rilling.

Rilling emphasized the “green” aspects of the project. “Consumers love to get green for free, but they don’t want to pay for it. Our approach to green is that every aspect is green,” he said. Green aspects of the property include sidewalks made of a special permeable concrete that allow water to seep into the soil, rather than becoming run-off and gray water systems that allow water to be recycled. It is expected that almost all of the project’s landscaping water will be provided by recycled water that the project will get from reclaimed and treated effluent from toilets.

“We will have net zero water use,” explained Rilling. “Which means that we will be using less water than the land uses now for farming.”

Rilling bragged about the “hundreds of community meetings,” that Accretive has held over the years since 2005. “We have been getting the pulse of the actual people who live here,” he said.

Rilling said he has been repeatedly asked when the development will be built. That, he said, depends on when it comes before the Board of Supervisors to vote on the project.

If the project is approved it will be built in several phases, reflecting demand and the economy, he said.

After Rilling’s presentation members of the audience were invited to meet with him and Costa to ask questions and see up close some of the envisioned houses and commercial aspects of the project.