Doing things right is important to Rached Maalouf, the owner of the Sattva Fitness Yoga Center in Escondido.

“Authentic” is the word that keeps coming up when talking to him about his yoga business and lifestyle.

“Authentic Hatha Yoga from India is what I know and what I teach,” he said, “All of my teachers that I learned from all learned from gurus from India.”

Maalouf was born in Lebanon and moved to Boston, Mass., in 1976 at the age of 12. He move to San Diego Coun­ty in 1990 and now resides in Escondido with his wife Darlene and two children.

He learned yoga from Ranjani Cobo, a female pediatrician who studied with Indra Devi, who in turn was taught by the legendary B.K. Iyengar and Patthabi Jois.

Iyengar is known for being a stickler on alignment, the exact, correct position­ing of the body in the postures (or “asa­nas”) of classical yoga. Jois is known for his Ashtanga or 8-limbed yoga and the flowing practice of yoga.

“I’m grateful and fortunate that I studied with her,” he said. “She teaches the Ashtanga that is very authentic and the Iyengar which is about alignment, so that is the best of both worlds.”

Iyengar and Jois are an important part of Maalouf’s yogic lineage, both gurus were students of Tirumalai Krishnam­acharya, a grand master who died at the age of 100 in 1989. Jois was 93 years old when he died in 2009. Iyengar died at age 95 in 2014.

The teachers of Maalouf’s generation studied with these founding fathers. He followed the Ashtanga path with Tim Miller, the well-known Encinitas-based teacher. Maalouf added Synergy Yoga, which takes place in a heated room, to create his own style.

Classes range in difficulty from 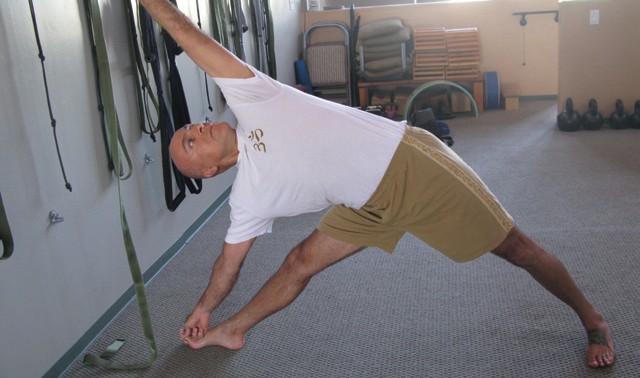 mildly challenging to a 1½ hour, Level 3, heated workout (45 minutes stand­ing, 45-minutes on the floor). His oldest student, 87, has been coming in weekly for 11 years for her Level 1 class. She opts for a Level 1 class and restorative postures.

“Only in the last 100 years have women been doing yoga,” he said. “Be­fore, it was a father-to-son business in ashrams and temples in India.”

His Escondido clientele is largely made up of women. Twelve women and three men in a class is not uncommon.

“My most challenging students are certified vinyasa teachers that come in and I have to fix everything they do,” he said. “Sometimes they are not doing what the teacher is practicing.”

His gets teachers for his studio from the ranks of his students who attend 31 classes per week, which includes free meditation classes on Tuesday and Sat­urday mornings.

Maalouf supplements yoga teaching with classes on strength and condition­ing with Russian kettlebells and TRX suspension training. He learned the kettlebell techniques from Pavel Tsat­souline in a grueling three-day mara­thon training on a La Jolla baseball field. Trainees had to perform many difficult lifts themselves before receiving certifi­cation.

Maalouf practices what he preaches: vegetarianism, doing yoga consistent­ly, “ahimsa” which is Sanskrit for non violence (“not even killing a bug,” he says.), and striving for “sattva,” which is a state of balance.

Overall, he believes that yoga should be authentic.

“Over the years I’ve had people come from doing yoga from a video or a book…but if they keep going like they were doing, they would have created an injury,” Maalouf said. “Because a video can’t correct you; a real person has to see you.”