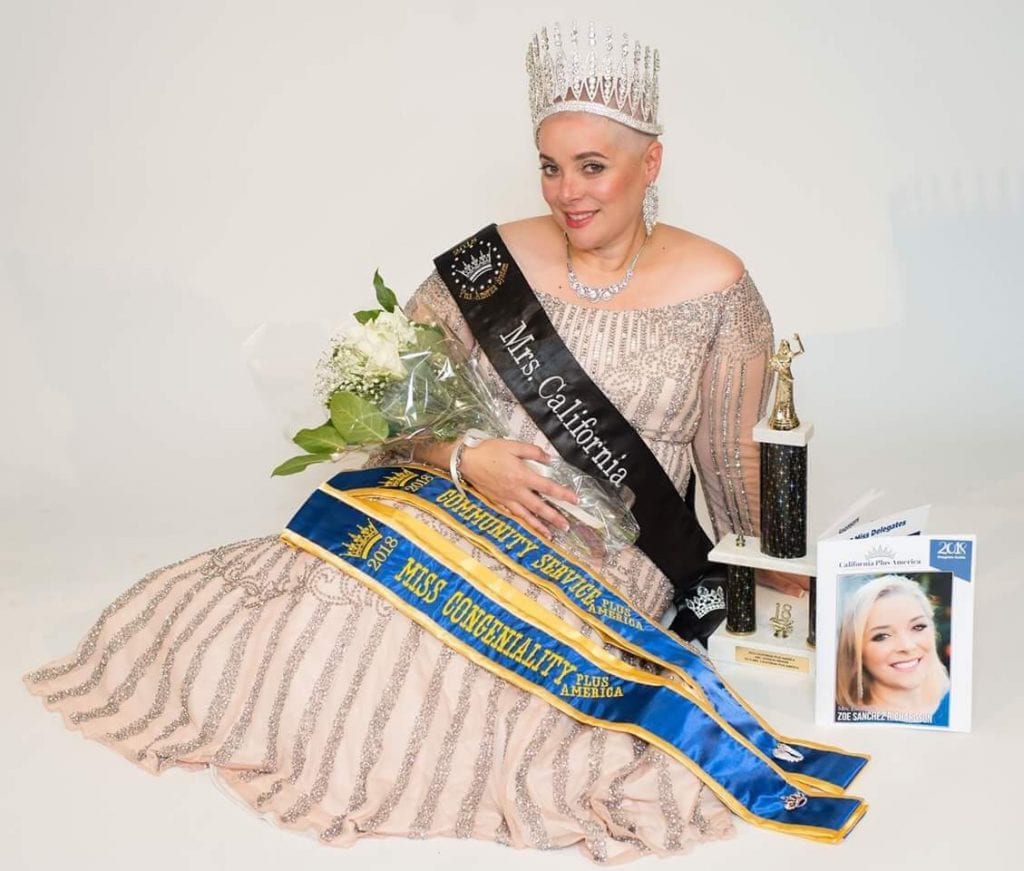 “The purpose is to embrace the beauty of a plus size woman” says Zoe Sanchez Richardson of the Mrs. California Plus America Pageant, which she won Sunday.

A woman who is fighting cancer and yet finds that when it comes to parenthood things are “cheaper by the dozen,” has won the Mrs. California Plus America Pageant.

Zoe Sanchez Richardson of Escondido won the crown over the weekend in Anaheim.  She won several awards at the pageant, not only Mrs. California Plus America, but also for Community Service, Miss Congeniality and Cover Girl.

Mrs. Richardson, who is a breast cancer survivor—and an indefatigable volunteer in many of Escondido’s charitable causes and for causes around the state and country—explained that the pageant is for plus size women, 14 and above. “The purpose is to embrace the beauty of a plus size woman.” Things taken into account include professionalism and volunteer work. “It’s about promotion, self-esteem and community awareness to bring the sense of pride among other women about being plus size. In the fashion world you are considered plus size. The average woman is a plus 14,” she says.

She added, “We aren’t saying ‘look at me, look at me!’ We are being proud of who we are. We are not trying to be anyone else than who we are ourselves.”

Volunteerism was a “huge” factor in her winning the crown. “Our pageant director is a Hollywood actress who volunteers immensely. She wants us to be out there. All of us who competed this weekend had thousands of volunteer hours.”

On her Facebook page Mrs. Richardson wrote, “I will honor every woman who has battled cancer and lost their breast to cancer. I will continue to work hard supplying my community, foster homes, senior citizens, and Tijuana orphanages with books and buddies.”

She added, “My work does not end just with cancer or literacy. My passions are endless and I will succeed and WIN this battle against cancer! Cancer messed with the wrong girl!” 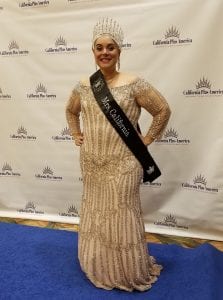 Her volunteerism included her year as Miss Escondido Plus Size, many different organizations associated with the American Cancer Society and the fight against spina bifida. She also started a reading program called “Sweet Reading” for which she won the literacy award from the City of Escondido and a Points of Light Award from former President Bush. “I’m a big advocate for getting kids away from technology and into reading,” she says, and added, “I read your newspaper!”

Her big weekend started on Friday night at the Anaheim Garden Majestic Hotel, followed by a visit to Disneyland, where the 11 contestants mingled and got to know each other. “It was our moment to bond, take pictures, meet other people and watch Disney Fireworks,” she says.

Saturday morning were their interviews with the three judges. Biographies they submitted, and these personal interviews helped determine their final score.

One of Mrs. Richardson’s questions was “How would you mentor a woman facing difficulties?”

“I told her that it was important to mentor women,” recalls Mrs. Richardson. “We need to lift women up. I would define her goal based on what she wants and make a plan. Nothing happens overnight. This isn’t a quick instant thing. You set up plans, and cross off things that can be done immediately. You persevere. When you are down, pick yourself back up. I’ve been knocked down and I pick myself up. You have to decide if you will be Debbie downer. I would rather be positive.”

The second judge asked her attitude toward “The Wall.” “I told him, my grandparents fled from Havana Cuba when Castro took over. They lost their business and homes and fled on a banana boat. My grandparents were able to land in Miami. They took refuge in America and in eight to ten years became citizens. You can build a wall but why not invest in education, and business in redeveloping things in Mexico? Why not do what we did for Japan and cities like Hiroshima after the war? You can build a wall but if people are determined to come they will come. Let’s bring the country up so they won’t have the desire to come in.” She added, “I’m a Republican, but I don’t necessarily agree with the current president.”

The third judge asked her about the foster children she and her husband host. She described how when they had been married for five years they decided to foster children. They have faced twin challenges together. She with her breast cancer and he with spina bifida, a condition he was born with.

“My husband is a dispatcher with the Escondido Police Department,” she says. “With his coaching for Police Office Athletic League, we felt that kids needed homes. We got our first siblings. A year and a half later it has been amazing. It’s one thing to have biological kids say, ‘I love you,’ and a different level to have kids who know who they are, calling you that.”

They are fostering two siblings they intend to adopt. “We plan to adopt twelve more. They are all going to be girls—so my poor husband!”

After the interviews they rehearsed and readied for Sunday, the last day of the pageant.

At the pageant itself, Mrs. Richardson was “completely in shock and blown away!

Not only did I win Mrs. California I won cover girl, community service award and was picked Miss Congeniality!”

Her duties as Mrs. California Plus America will be to continue her platform of Breast Cancer Awareness for Women and Men. “My organization is the American Cancer Society, which has been there for myself and for my family. Our duty is to continue our volunteerism and bring awareness for plus size women and to empower women. Every weekend I will have some kind of event,” she says.

That doesn’t mean just showing up in a crown and a sash. Zoe Richardson likes getting her hands dirty.  “In September we have an event in Skid Row [in Los Angeles] feeding the homeless,” she says. “It brings an appreciation of what you have personally. This is a problem we have had since the 1970s. And the solution, and problems of homelessness and issues with mental illness have not been addressed. Something has got to be done to address these issues.”

Her two foster children lived on the streets of Escondido. “Their situation was brought about by their biological parents. This is real and happening in America and happening in our cities. It’s just heartbreaking. Our youngest slept in a shopping cart while our oldest slept in the sewer. We are America. We are the greatest nation and we have all these issues. I don’t think my platform will just be cancer awareness, although I’m very passionate. I will do a plethora of community works. I don’t get involved in politics, I like to work with people who like to get their hands dirty.”

If you are a women age 18 or older who would like to compete in the Mrs. California Plus America Pageant, Zoe Richardson is ready to help you.  “They are more than welcome to reach out and contact me!” she says. Call or email: 760-855-6867 or zoesanchezrichardson@yahoo.com.