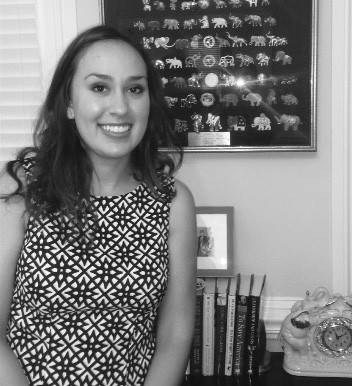 Sophia Hernandez at the National Federation of Republication Women Headquarters.

Hernandez was one of two young women selected within the U.S. for this paid internship. The program is named after former National Federation of Republican Women President Dorothy Andrews Kabis, who served from 1963-1967 and was later appointed Treasurer of the United States by President Richard Nixon. Each year, the program offers two young women the opportunity to spend up to six weeks in our nation’s capital working in the headquarters of the country’s foremost women’s political organization.

Hernandez is majoring in Business Management with a minor in criminology at Cal State San Marcos with hopes to pursue a career in criminal justice. She is an active member of the San Diego Young Republicans and works for Assembly Member Rocky Chavez.

Hernandez sees the Republican Party “in the midst of a renaissance” and believes her “experience as a young Latina California Republican can add fresh ideas and a new mindset to the conversation”. Hernandez feels: “Each day is a new and exciting adventure in the political process and I wish more young women were moved to participate. I want to express my most sincere thanks and appreciation for the efforts and kindness you have shown me in supporting my internship this summer. Having such great support back home is an amazing feeling and pushes me to do better.”

For more information and applications go to: www.nfrw.org/programs/ scholarships.