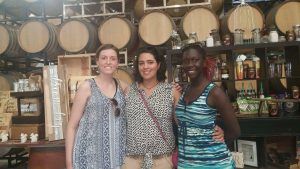 Several film students at John Paul the Great Catholic University in Escondido are raising money to fund a film that will be their Senior Thesis.

They are required to develop a Senior Thesis short film from pre-production stages all the way to post production.  In order to do this each project must raise a certain amount of money to get the film made. The film is called “Windfall Rising.”

“Windfall Rising” is the story of an old grape farmer named Will. Since childhood, Will has loved his vineyard, which has been in his family for generations, and has committed his life to preserving it. Will’s world is under attack when Jack, a young business man, sets up a grape stand across from his, stealing his customers and business. Will takes on Jack’s advances to prove his worth and save the only life he knows.

The team telling this story is composed of young, diverse students who are pursuing various film related degrees, including everything from producing to production to screenwriting. And this project, “Windfall Rising,” is one of the Senior Thesis projects chosen to be screened at the local Regal Cinema at the end of the year. 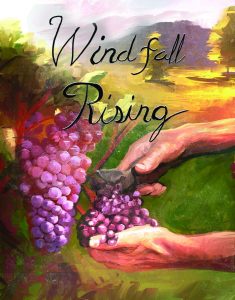 A poster for the film Windfall Rising.

Meghan Woodard told The Times-Advocate: “We are telling this story because it is one that deserves to be told. It is in our human condition to suffer for the things we care the most about. Will’s love of the land and his determination to power through his pride reflects how we as a people move past our flaws in order to keep the things we love most alive. This story is a reminder of our humanness and a reminder that we should never let anything get in the way of achieving the things we strive for in life.”

She added, “The only way this film can be made possible is with the support of family, friends, and the people around us that believe in this story as much as we do. We invite you to please check out and share our website and various social media sites to learn more about our inspiring story and our talented team. Then, if you are able, please consider donating to our IndieGogo page as well so that this film can go from script to screen. Thank you so much for your help and support!”