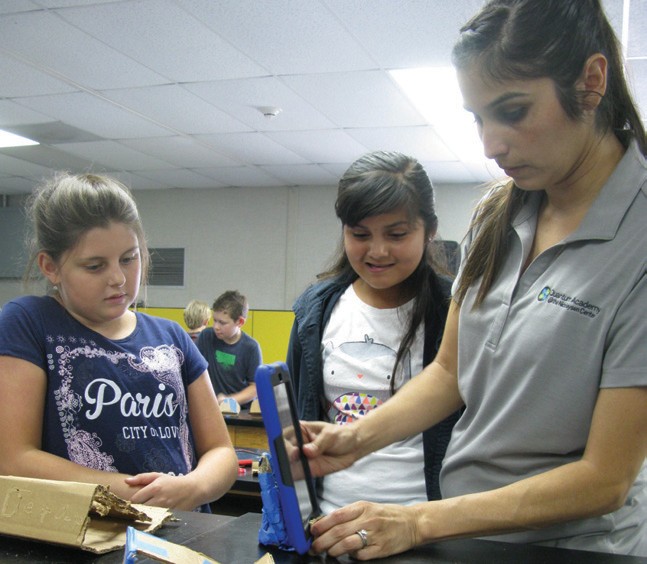 Above: Anna Distefano and Rita Sauceda work with Ms. Miramontes on their iPad mini projects. Photos by Doug Green.

The walk to Vanessa Miramontes- Solorzano’s classroom takes me through a central, high-ceilinged room. It is full of children. A teacher cautions “don’t step on the drone” and I hop-skip around the device, about the size of a pie plate, with four tiny rotors.

The children are gathered around the tiny aircraft, learning a lesson in physics. Their instructor “is teaching them how to program” the drone-copters, “distance times rate times time, so she’s putting some physics in there and they’re being introduced to it and building background knowledge,” Miramontes tells me later.

I pass through Miramontes’ room, which is a standard schoolroom, to the outside and then into a workroom with computers along two walls and industrial looking work tables. Here is the classroom of the present and future at Quantum Academy in Escondido.

Miramontes is leading her sixth-graders in her stated goal “to establish a much richer technology – and engineering-based experience for our students and then fully integrate these projects into the classroom.”

Miramontes says her sixth-graders have been assigned a project: produce a stand for their iPads using as little cardboard as possible and making sure the iPad will stand on its own.

All around us students are working at computers “scaling a design in two dimensions” and hacking through cardboard with electric knives and using blue tape to stick their cardboard designs together.

Students bring the cardboard prototypes to Miramontes to test to see whether they can hold up mini iPads in a readable position.

The prototypes designs are then put into the computers and a 3-Dimensional printer will produce the stand in plastic.

As of last week, three of the iPad stands had been produced in three 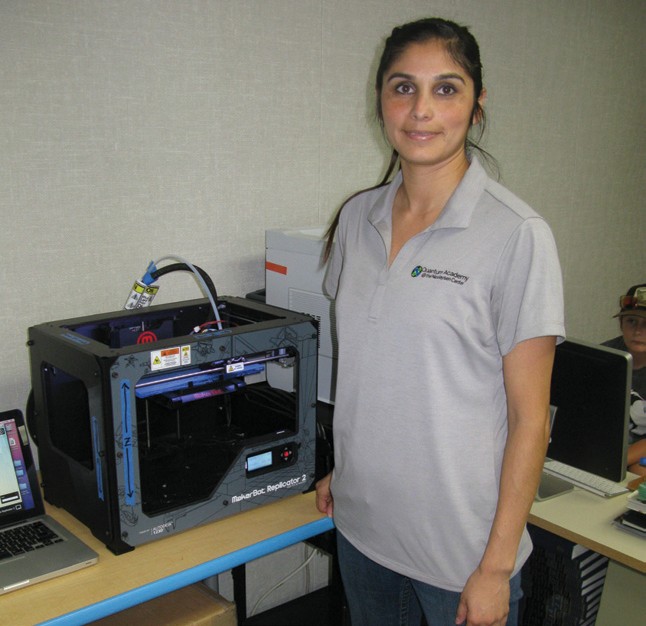 Below: Vanessa Miramontes had the academy’s only 3-D printer running at top speed as her students prototyped, computer designed and prepared to create an iPad mini stand using the new 3-D printing technology.

dimensions, which is a burgeoning technology in the business world.

“We’re moving along slowly, but we’re getting there,” Miramontes says.

The academy, which opened in August of this year, hopes to get two more 3-D printers in the near future, according to Principal Ted Kirkbride. The school wants students to experience creating things with the technology so “there is nothing they can imagine that they can’t create,” Kirkbride says. “We’ve been learning a lot as we go along as well.”

The academy had just under 500 applicants for its six opening classes and was able to place 192 students in August. It will add seventh grade classes in 2016 and eighth grade in 2017. Kirkbride says. The lottery for next year’s new students opens again this month.

The academy is a product of the Escondido Union School District’s desire to bring technology into the classroom. The model is called STEAM, which stands for science, technology, engineering, arts and mathematics.

Miramontes, whose immigrant father told her there would be no money to send her to college, didn’t falter in her pursuit of education. She worked full time while earning her degree and teaching credential. She has been working with the EUSD since 2001 and was Escondido Union Middle School teacher of the year for 2014-15.

She aggressively uses funding sources from donate.org, an award-winning website that helps teachers gather donations. Her last project bought USB hubs that allow teachers to update seven iPads from one source at a time. She says “doing it one at a time was very tedious.”

Her donate.com pitch states “My students are 21st century learners who will be confident leaders who will impact the community through empathy, creativity, and innovation.”